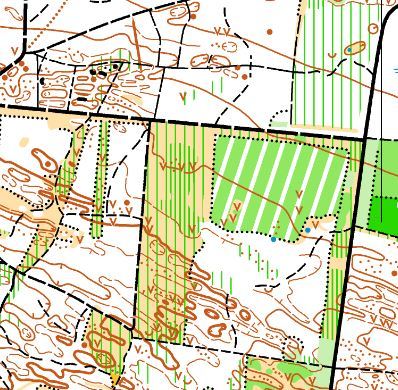 Richard Sansbury's four minutes on Pete Shirvington made him top QO on the day. M45 Pete at least secured bragging rights* on the journey home over his three super fast 20-something travelling companions, Ollie Rant and the Fieldhouse brothers Adam and Robin. (* but knowing Pete, he probably didn't exercise them 😉)

The lesser-spotted (at least these days) Brian Pearson showed he's still got it, taking some notable scalps on Blue (locals Chris Kelsey and Ifor Powell). Steve Lysaczenko may also have been hungry for action and keen to prove a point. After perhaps an outing to forget at Lydeard Hill, he enjoyed perhaps his finest run in a QO jersey, nipping ahead of Martin Lewis and not too far behind Steve Robertson.

A stone's throw or two from Graham Hartley's abode, the detailed contour action looks like it was meat and drink for Graham who achieved a top 10 finish from 80 entrants. M70 Tony Hext beat many his junior to finish 25th.

The junior Lewis siblings had solid runs, Annabelle finishing halfway down on Light Green and Oliver in the top quarter on Orange.

Finally, the event was organised by BOK's Simon St Leger-Harris, just three days before the Tiverton MapRun he has kindly co-planned for QO with Miffy Treherne BOK. No rest!

Routegadget (here)- check out the routes of the top two on Brown, both GPS tracks