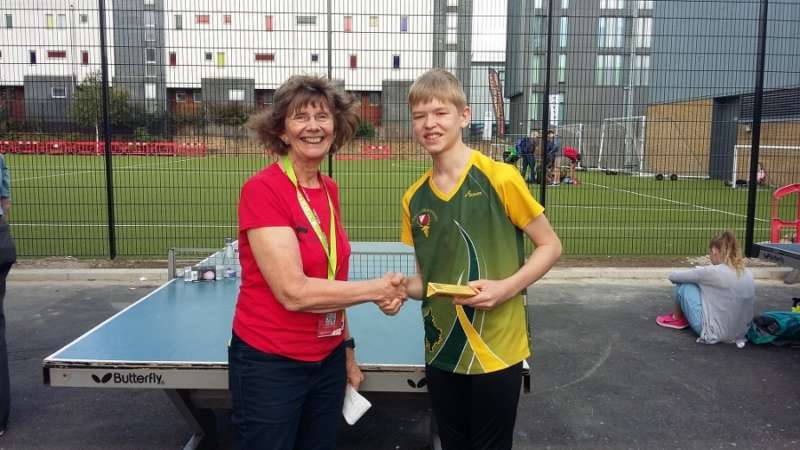 Anyone for table tennis...or a bar of Toblerone?

The new season has really got going, with three events in the region this weekend plus the London City race, where Andrew Page made the junior men's podium. Meanwhile, M80 Bill Vigar took 3rd place in Devon OC's club champs, up on Dartmoor.

QO members were also in Gloucestershire for an urban race.

Andrew Page made the podium in the M16 category in South London OC's annual urban-based contest that took in The City and the South Bank. Finishing 3rd out of 14 in an international field, Andrew took the step up in course length in his stride. His was 3.5k compared to the 1.4k course those a year younger would be running.

Tony Hext did well too, finishing in the top half of nearly 100 entrants in the men's ultra veteran class and was 9th out of the 35 M70's running.

Bill Vigar was a close 3rd at Yelverton, behind Devon's Ben Chesters and Flurry Grierson, also the top two in our QOFL series last season. Andy Rimes was 12th. Annabelle Lewis managed to finish ahead of recently crowned QO club champion Sue Gard middway down the field of 40 who ran at Yelverton. Like with our club champs, an age handicap system was used.

The Lewises were also awarded their certificates for various 'podium' finishes in last season's Devon Moorland League. Pretty impressive placings when you consider this was the family's first full season orienteering, plus the tricky open terrain and the changeable nature of weather on Dartmoor during the winter.

Read more about this here

Three QO members attended North Wilts OC's grandly titled Corinium Canter on Sunday with Julia Robertson's the pick of the runs in the Gloucestershire market town. Normally noted as a good technical orienteer rather than much of a runner, Julia came 10th of 16 on the Ultra Vet Womens' course (W65+). She was nearer to the winner's time than she was to the last person's time. Steve Robertson and Martin Lewis also ran.

Further south, Bristol OK put on a parkland and urban race on the west side of the city at Durdham Downs. Surprisingly there were no takers from QO!

Next weekend (Sep 22/23), ten members are off to Wiltshire for the traditional season curtain raiser, the Caddihoe Chase. See Sarum OC's website for details. The weekend after that (Sep 29/30) there is another chance to run back-to-back events on very good terrain, again with 90 minutes of Somerset, courtousy of South Wales OC.