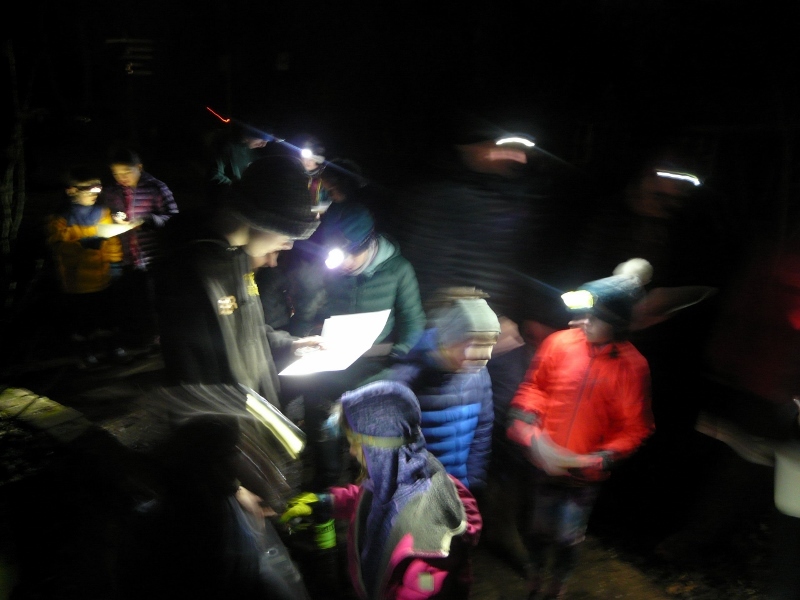 Action from the night nav

Annabel Carter and Jacob Chattell's reports describe the weekend from a junior perspective and Vikki Page's piece gives a coach's point of view.

On arrival at Huish Woods, we got stuck straight in with some training. Juniors were given a lesson in pacing, led by Alistair and Vikki; followed by an activity where we were divided into groups of four, then two of us hid a cone in the woods, then, after marking it on the map, the other two would use their orienteering knowledge to find it.

After a delicious lunch of sandwiches, warm sausage rolls, fresh fruit and plenty of steaming hot tea and coffee, we were ready for the JOG. 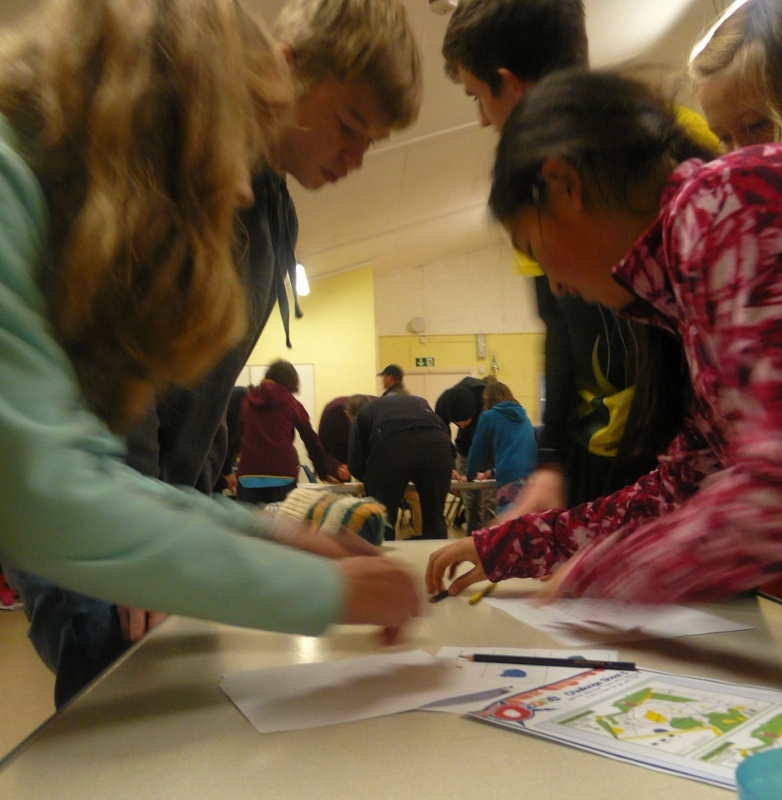 Soon we were taking slippers off and putting headtorches on

When we had finished our courses, there were plates of cake and cups of tea (or coffee) calling us.

In a corner of the hall (where we were staying), there stood three blow-up double mattresses on top of each other which had been painstakingly blown up by my friend Annabelle (I had helped), but soon the temptation became too great for some of the children, and the mattresses soon became a trampoline.

Soon we were taking slippers off and putting headtorches on as we got ready for the night navigation exercise.

This consisted of adults trying to keep up with children, as we sprinted along muddy paths and under trailing branches. At least that was true in my group!

After tea, we all participated in some orienteering themed games, like bingo, but with an orienteering twist, and scouting the room for matching pieces of map. Our teams got very competitive! 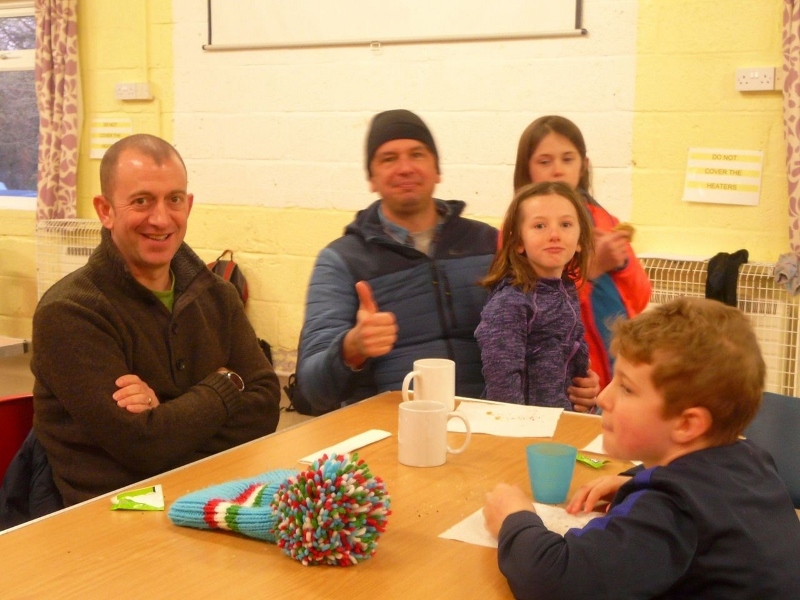 Relaxing in between exercises

Soon we were sitting by the campfire, toasting marshmallows and reminiscing about the events of the day.

That evening, tired out, we snuggled into our sleeping bags whilst some of the adults sat and chatted late into the night.

That morning I awoke to the sounds of little children pretending to ice skate on the hall floor, whilst most of the adults huddled around the tea and coffee bleary eyed. The teenagers tried to prolong their slumber as much as possible.

When we ventured out after a cooked breakfast, we discovered icy patterns everywhere. Some took this as an opportunity to break as much ice as possible or draw smiley faces on cars. 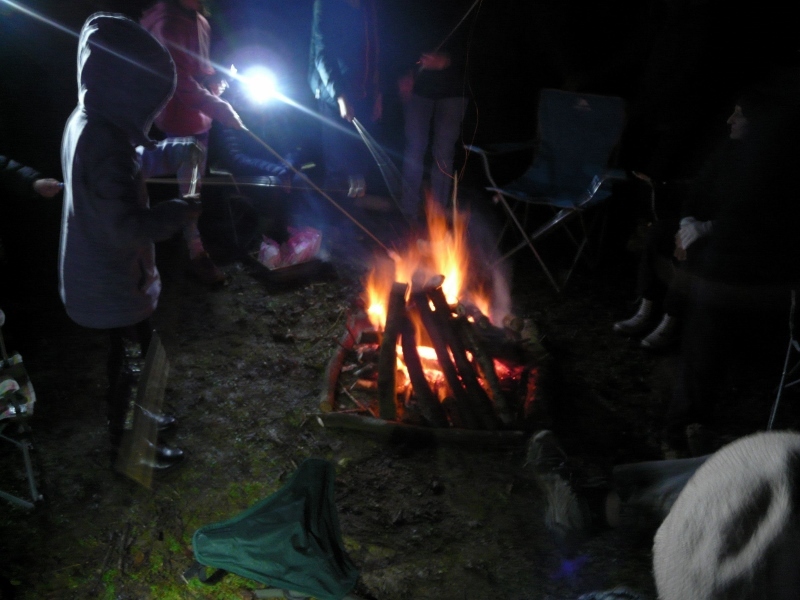 The bonfire awaits some marshmallows to burn, sorry toast

For training, we went in groups to investigate unusual landmarks. My sister and I thought this was great fun as we could run around as much as we liked and investigate depressions and unusual trees.

After that, in the dewy field where the play area was, we learned how to take a bearing and tested our knowledge of pacing, and at the same time got very wet feet!

Then we were challenged to test our training by doing a JOG course, but a level up to the one we had done the day before.

All too soon, we were packing up to go home and collecting the controls having learnt some new skills and made new friends. 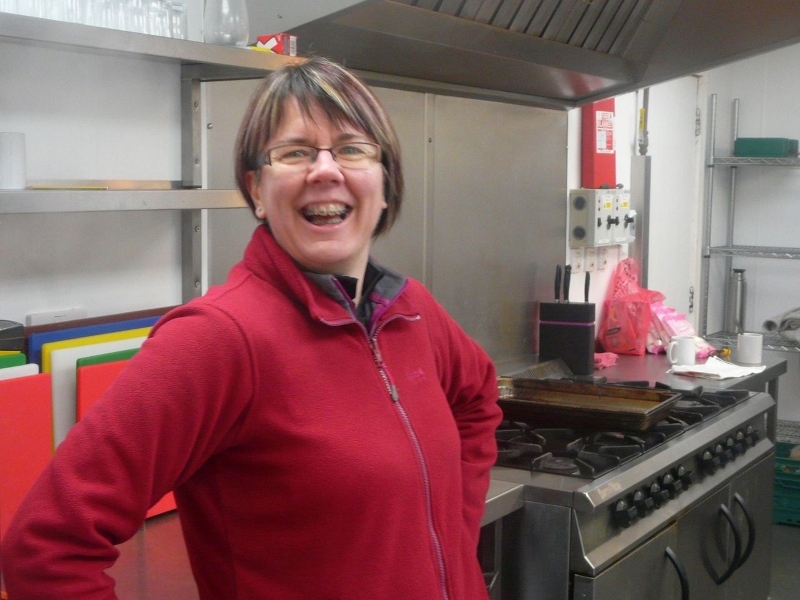 Vikki taking a break from the action - in the kitchen

I led the juniors group with help from Alasdair and Karen. On Day One we had 18 keen juniors, with a couple less on Day Two.

We started Day One getting to know our own pace count and the effect of terrain on pace counting. Swiftly followed by a feature walk around the South East area of Huish Woods discussing relocation techniques. A fun game of cone relay in smaller groups confirmed how accurate (or not!) they were at placing and retrieving their cone. Final exercise of the day to warm them up for JOG was perfecting punching skills at speed and against each other with the punch snappers.

What a fabulous weekend to be part of...all of the juniors were amazing, making new friends, having a go 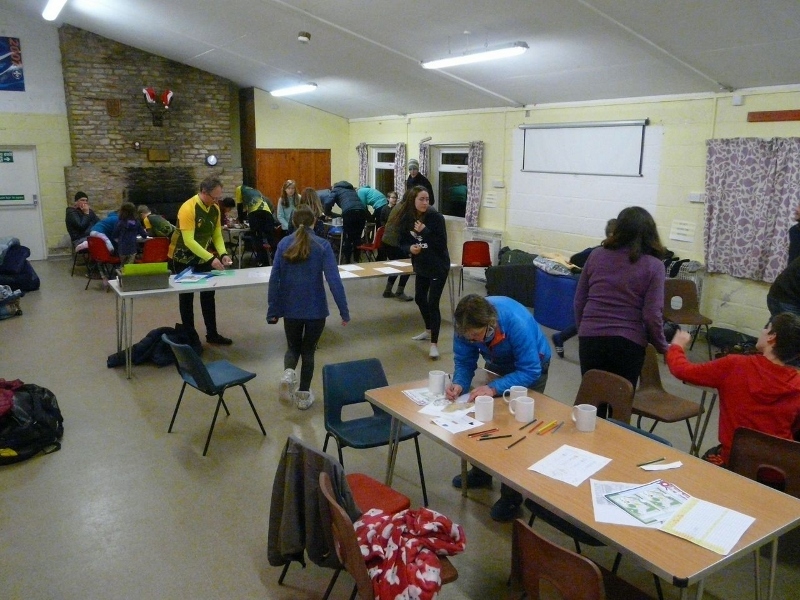 Day Two started with Alasdair introducing bearings to the juniors and how to use them in practise with some fun games. For the final exercise of the weekend I then threw down a challenge to all the juniors to have a go at a course at least one above their usual level. Fuelled by confidence from skills learnt over the last two days, familiarity and safety of the area they all took up the challenge and all enjoyed successes.

What a fabulous weekend to be part of! Full of like minded people all willing to muck in and get the most out of it! All of the juniors were amazing, making new friends, having a go, all trying their best and challenging themselves then trying a new course that they probably wouldn’t ever have thought they were capable of! Just lovely to see. 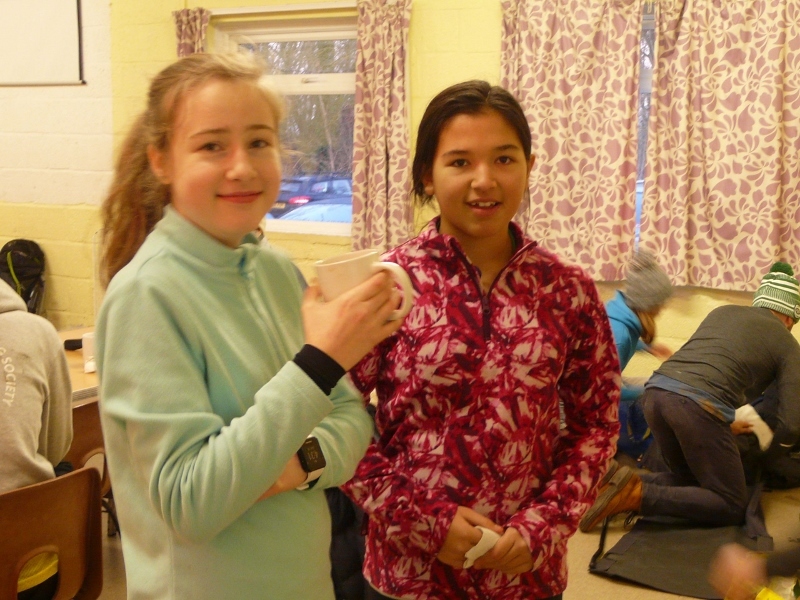 Older juniors catching up over a cuppa

When we first arrived it was cold but nice and sunny. We got on with some training with our coach, Vicky. The training was to help us with our pacing and navigation which was good fun.

We made our own sandwiches at lunch time. The butter was pre-applied to the bread which was very handy. I suggested to my Dad that it would be good if he did this at home but he said it was never going to happen!

At the night orienteering me and dad got properly lost

After lunch we took part in the JOG event which was amazing. It felt very safe because if we got lost we just had to run up hill to get back to the start. After the JOG there was a presentation and I was really pleased to win a trophy. I also won a certificate which I was not expecting for completing the most JOG events – nine of them! 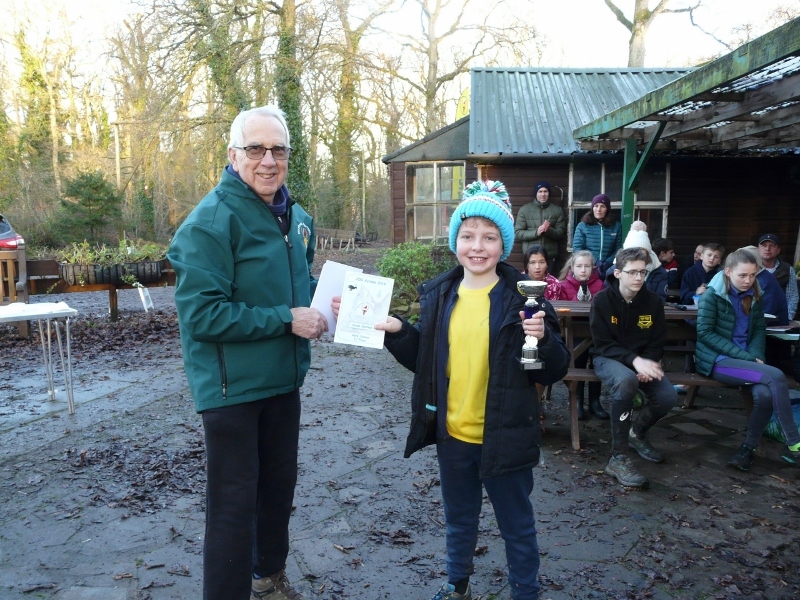 The junior trophy presentation, with Roger doing the presenting

There was lots of cake in the main hall afterwards. My favourite was the chocolate tray bake.

Later on we went night orienteering. Me and my dad got properly lost so we did the trick – walked up hill until we got back to the main hall. In morning we could see the well we were looking for the night before. We had been stood right next to it! 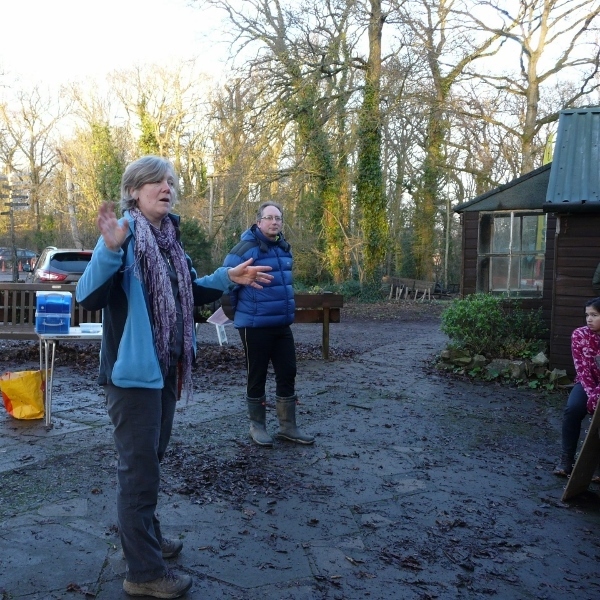 The evening meal was lovely, chicken, potatoes, sweetcorn, baked beans and peas. With meringue, ‘squirty’ cream and fruit for pudding. After our meal we did lots of indoor orienteering games which tested our memory and map skills. Later we had a camp fire and roasted (burnt) marshmallows with a hot chocolate in the HQ to finish the evening.

The next morning we had a luxury breakfast of coco pops followed by bacon and sausages in a roll. Then training started again. This time we were working on using bearings. At the end of the morning there was final fun event which tested everything we had been learning over the weekend.

Overall, it was a brilliant weekend with a score of 10/10!

Also at Huish Woods - coaching for the seniors 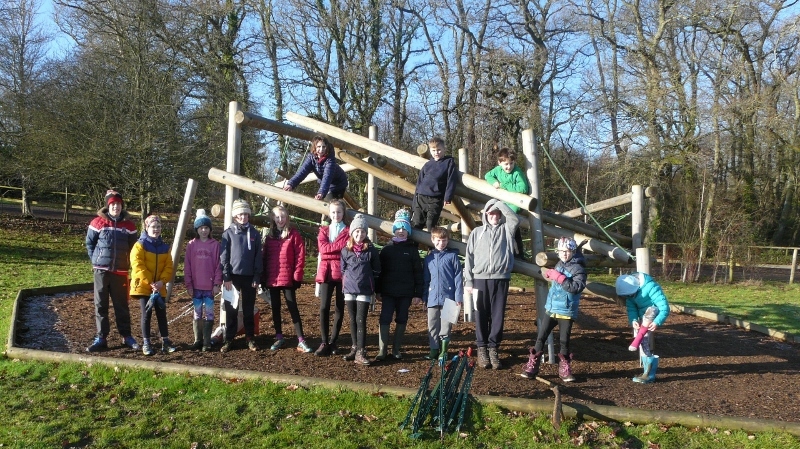