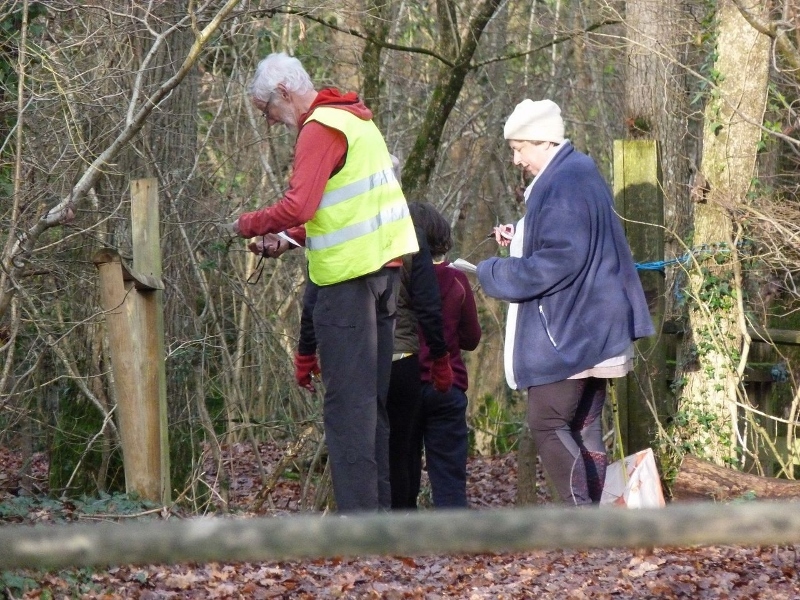 It was the club's first training weekend! So how did the senior coaching go? Sarah Pascall and Tom Hasler each give their accounts.

Plus coaching team member Richard Sansbury describes the exercises the coaches devised and got their group to try out.

We planned to go to the training weekend at Huish Woods for our two children, so to find out that there was training for the seniors too was a fantastic bonus.

Having pushed the children off to the very capable junior training team, we got stuck straight in with a bit of pacing work. I had been planning to do this for quite some time but kept putting it off, so I was very pleased to have distances all mapped out for me to practice on. 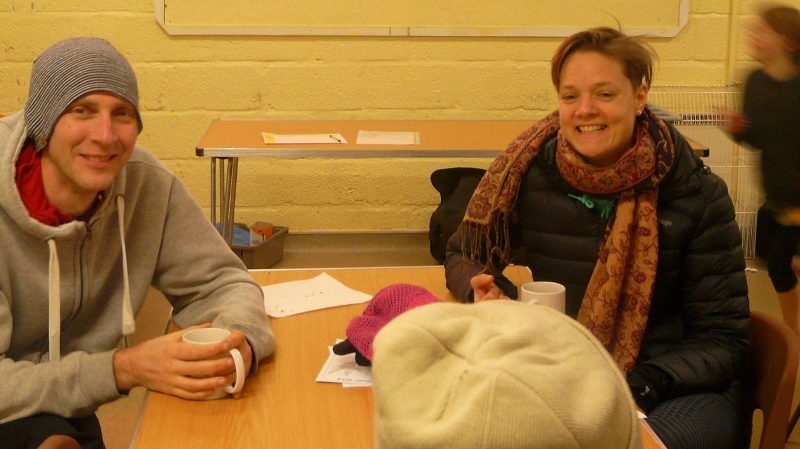 We took the training down into the fields, and then into the woods to get used to it in all sorts of environments.

After a lovely lunch provided by Sarah Maynard and Karen, we had the chance to practice some of our new found skills at the JOG. The juniors clearly had a tiring morning however, because our youngest decided he needed a nap instead of running around the woods. I didn't get a run this time, but instead caught up on a few zzzs. The evening was filled with orienteering fun and frollocks, before camping out in the scout hut for a night of semi-rest. 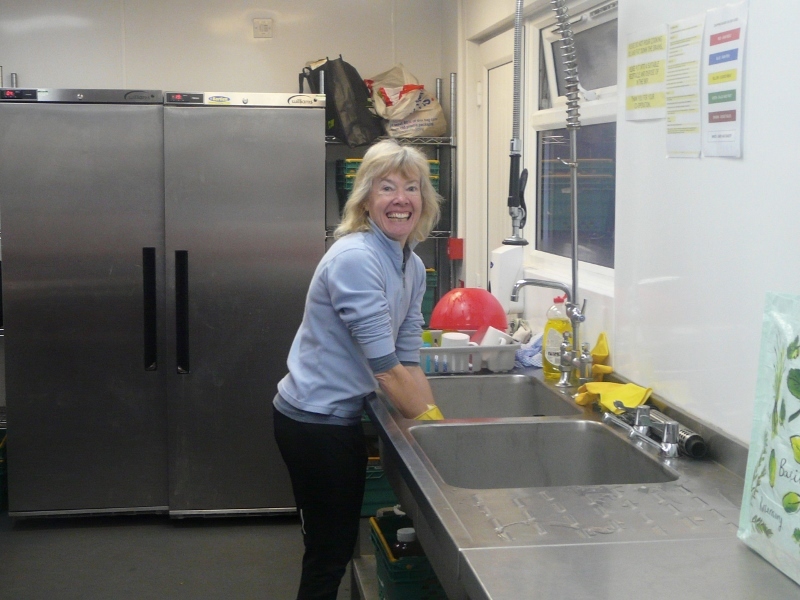 Sarah M, the overall caterer for the weekend

We lost a few of the seniors the next day to a galoppen, but gained a few more too. We practised a bit of rough navigation and corner cutting, and also discovered that we are never lost (merely that we 'have lost contact with the map'). Whether it was the relocation exercise that we did, or the new terminology, I now know that I shall never be lost out on a course again.

my brain hurts from having to calculate the number of paces

Both of our trainers Robin and Richard were brilliant. Our children loved their time with Vikki and Jana too, and made new friends with lots of the other children. I have already been using my pace counting down in Netherclay, and am feeling a lot more confident (although my brain hurts from having to calculate the number of paces, is this running or a maths class?) 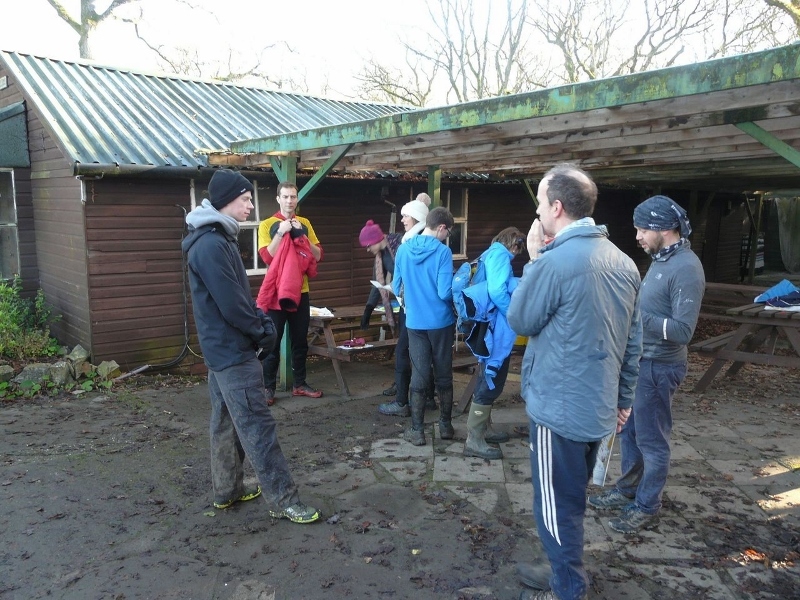 What were the training exercises?

One of the coaching team explains...

We had two morning training sessions during the weekend to learn and practise navigational skills. I led the seniors group with help from Robin Carter with a dozen on day one and a few more on day two.

On day one we tried some precision navigating. We started with pace counting to judge distance in different types of terrain, then tried out pacing on a bearing across what turned out to be a very soggy field. Then we transferred this skill to the woodland. 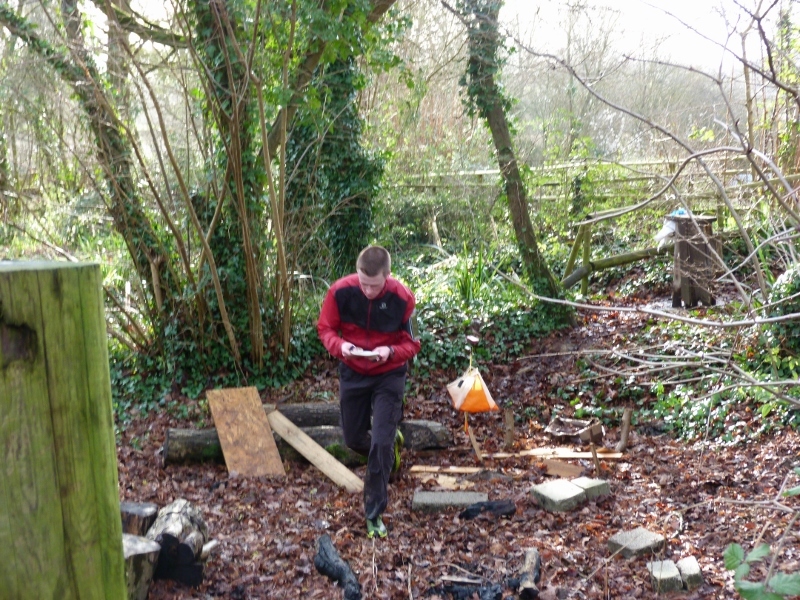 Another senior course participant, Ollie - in action at Huish

On day two we started to look at rough navigating, with a simple corner cutting exercise. Then we tried out to link fine and rough navigating together on a very simple course. We practiced relocating in a complex area before we finished off with a quick relay competition. The overall objective was to learn to be better navigators and rely less on luck to find that control.

The training weekend kicked off at 10am, where we split in to the Adult and Junior groups. As part of the adult group, led by Richard Sansbury and Robin Carter, we did some bearing and pacing exercises, involving locations marked out on a map of a field, and us having to place numbers in where we thought those locations were using our bearings and pacing. 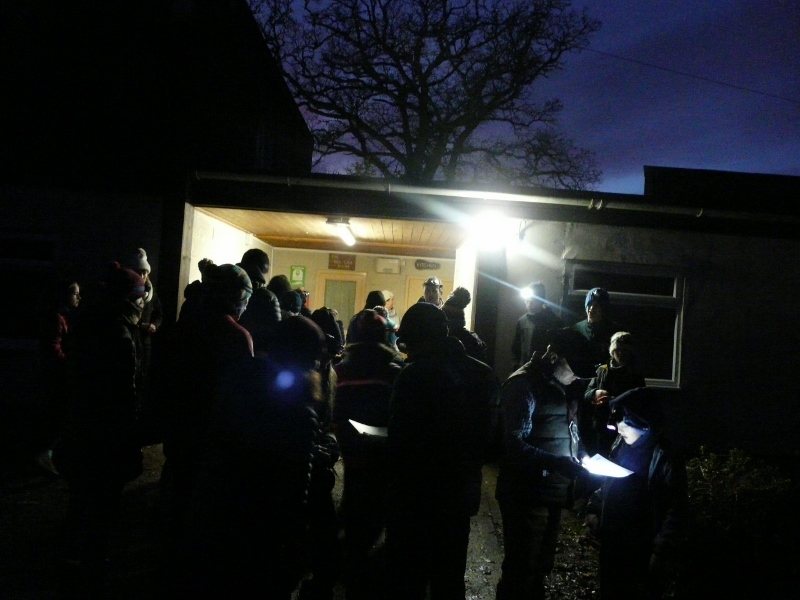 This meant that you couldn’t be lazy and take a bearing to a rough area and rely on spotting it to find the final location of the control, thus forcing us to use accurate bearings and pacing. Following this, we went into the woods and took bearings between various features, so as to test how we coped when the terrain was rougher, and it was more difficult to pick a feature to aim for, so going off the compass became more important.

After this, we headed back to the buildings, where we had some sandwiches for lunch before the afternoon’s JOG, planned by Mark Maynard. The Fox course presented the challenge of having the paths and fences removed, this proved especially difficult in the area where all the camp pitches were; you simply didn’t know which shortcuts were possible! This led to an enjoyable course. After everyone had finished their courses, JOG awards from the previous term were handed out by Alasdair Shaw and Roger Craddock. 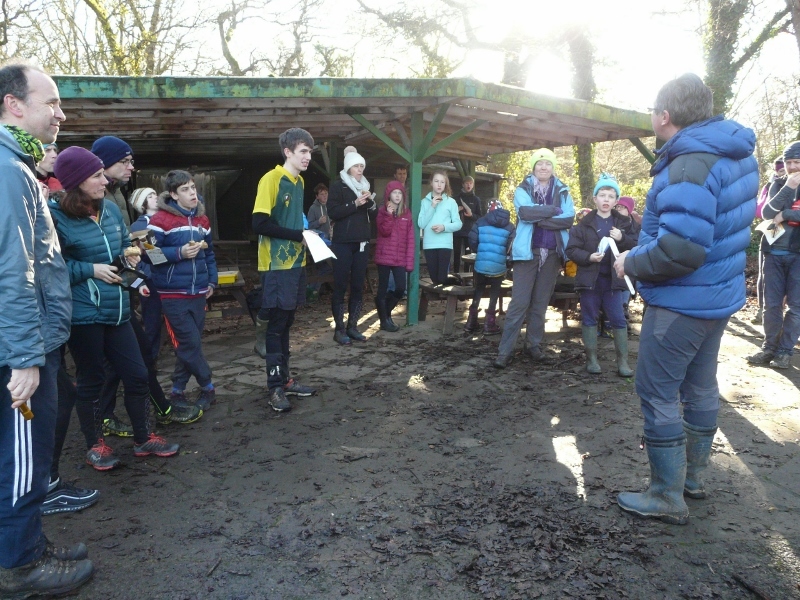 The added darkness made it challenging

Before dinner, we had a score course put together by Richard Sansbury, consisting of ten red and ten blue controls which had to be done in half an hour, with option do it as separate colours or all mixed together. The added darkness made it challenging, especially due to the large scale map (1:2500), as controls could easily be overshot, as we did for one of them! We then settled back down for dinner, kindly prepared by Karen and Sarah. 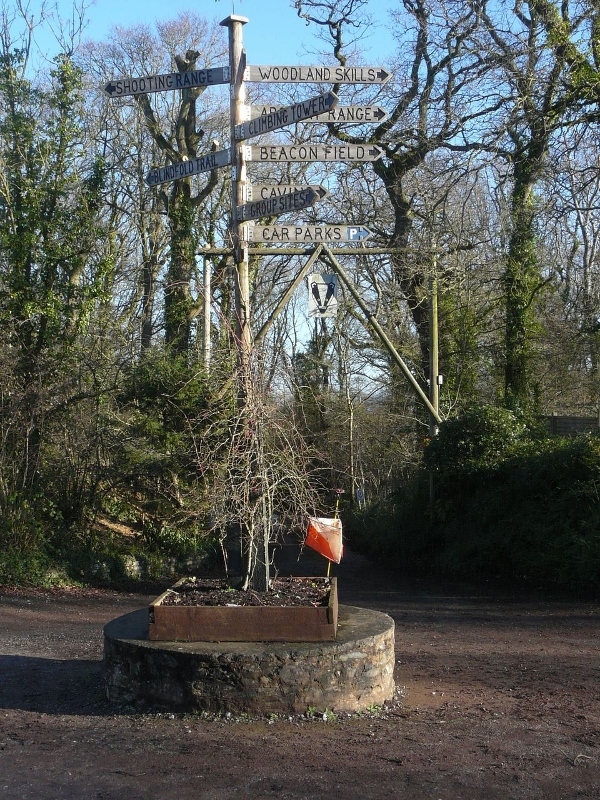 Afterwards, we divided into teams of six, where we did some indoor activities organised by Alasdair, including bingo, an exercise where we had to draw what was inside a control circle, and another involving locating a small map extract on the map it originated from as well as one where we had to find which pairs of maps hidden around the room matched up. Needless to say these were very energetic and engaging activities, which our team enthusiastically tackled.

Soon to follow was a campfire, around which we toasted marshmallows, a novelty we found quite fun and exciting, we then went inside for some hot chocolate and slowly got ready for bed, talking and relaxing.

In the morning, after breakfast, which consisted of cereal and a fry up, we did some more training with Richard and Robin involving “corner-cutting” and rougher navigation as opposed to the fine details of the day before. In this we would look at shortcuts that could be taken, and consider things like the contours and how they would affect our navigation, we used this to look at getting to the attack point (the feature you navigate to before honing in on the control).

A relay added a competitive element at the end

Continuing on, we did some relocation exercises in groups of three, where one person would have the map and take us to somewhere in the southern part of the wood, and the other two would then have to work out where we were, a hard task considering it was made up of lots of little camp sites and different paths. This provided a pleasant cooling down to the weekend, as this could be taken at a leisurely pace and we could relax and chat. To finish, we did a Harris relay in the teams of three, adding a slight competitive element at the end of the weekend.

All in all, this was a thoroughly enjoyable weekend away, and a good chance to skill up on our orienteering abilities, whilst being able to get away from it all.