A warm welcome to...

The Tilley family, Joanna, Daimon and Olly of Wiveliscombe. The Tilleys have taken in two of our first three virtual junior events, running first at Vivary Park then making their way up to Lydeard Hill.

Robin Fieldhouse of the Dulverton area. Robin is Adam's brother and the Fieldhouse family have been regulars at our virtual events over the last year, impressing with both their speed and enthusiasm.

Nick Townsend from near Taunton.

Miffy Treherne and Simon St Leger-Harris, having settled into the Wiveliscombe area, join us from Bristol OK.

Simon and Miffy may be familiar faces to those attending QOFLs but more so MapRuns, where they were the top two runners in last season's series.

In January, we were joined by Simon and Francesca Tong, of the Blackdown Hills area. Thanks to Simon for introducing himself and Francesca, further below. Simon is returning to the sport having attended major O events back in the day and took in the Huish Woods event.

Huish Woods was the second event that we have been to and we are impressed with the friendly family feel to the club, and also the number of events and opportunities that the club seem to put on. We live in the Blackdowns just outside Hemyock and have been there now for 10 years.

Personally I used to do a fair bit of Orienteering when I was a much younger M21 living in the Midlands, and in those days went to several JKs and 'Scottish 6 Day' events. However, that seems a lifetime ago now when we 'punched' control cards - returning as an M50 with eyes that can't read map detail very well feels very different!

Francesca is new to the sport but has thoroughly enjoyed the last two weekends charging around the woods. We are both looking forward to getting out over the coming months, I suspect it won't be long before she is leaving me behind!

M21 Jake previously orienteered with Devon Orienteers and has returned to the sport after a few years away. Jake kindly provided a few words to the QO Website to introduce himself

Jake says: "I started orienteering about 10 years ago through the club at my secondary school. I participated in many regional Devon events, as well as some national events, including the British Schools Championships and the 2011 JKs in Northern Ireland, which was the event that properly got me hooked on the sport.

"After a few years away from the sport since 2016, I restarted with Quantock Orienteers a few months ago (having recently moved to the area) and am enjoying relearning the techniques through trial and error! I am currently working at Green course level." 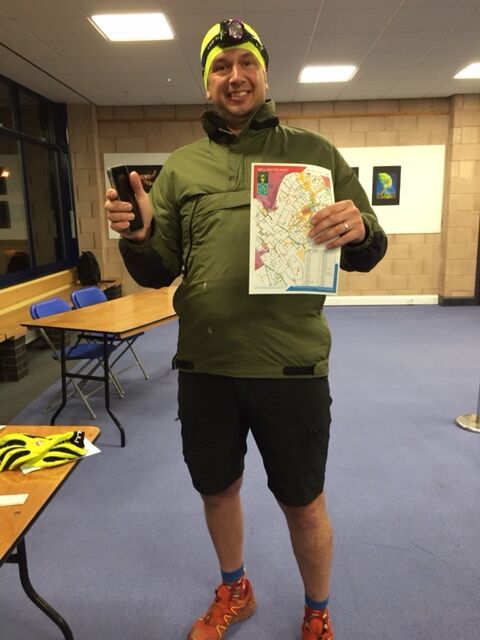 Angus about to try out our Wellington evening street event
Credit: Judy Craddock

The next most recent joiners were:

The MacAlister family of Wellington, Angus, Lucy, Ella and Gracie, who have been regulars at JOG.

The Chattells, Steve and Jacob of Taunton. Jacob won the White course at our Culm Davy league event and Steve was 3rd on Light Green.