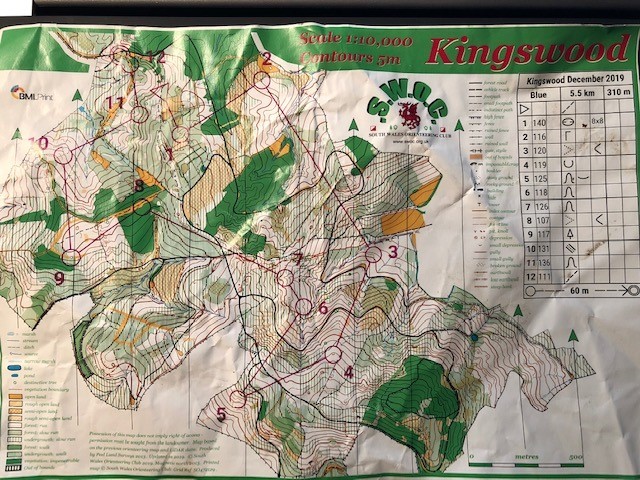 How did he keep it mud-free? Steve's Blue course, Kingswood
Credit: Steve R

The courses were relatively short but with considerable climb and those competitors who had been at the NGOC Soudley Ponds event on the previous day were hoping that today would be less physical. However, the walk to the start was not encouraging -- uphill on a narrow, muddy, very slippery track but it did improve.

Recovering from one of the bugs doing the rounds I had initially decided to jog round and navigate accurately to the controls but, as usual, once map in hand, the red mist descended and running in approximately the right direction in the hope of finding the control kites took over. Also true to form I made my usual number of two mistakes on the course – first, I confused two parallel forest roads and took a rather longer route choice than was necessary (I do need the exercise) and second, near the end, thinking ‘this will be easy’, ran past the control, by only a few metres, until I hit the next feature on the map and another control (surprisingly not the right one!).

Nevertheless, quite enjoyable and a different pair of glasses plus the planner using quite large pieces of blue tape to mark the control sites did help at times.

Much of the discussion at the finish was about the low, trip hazard brambles that were reasonably well mapped (at least where I went) but caused many competitors to take track/path routes rather than struggle through. That was ok unless the obvious, and probably the fastest, route to a control was straight through the bramble patch!

The QO Seniors may wish to draw a veil over their results but well done the Juniors:

Something that might cause a wry smile - the challenges are not always out in the forest. I had a somewhat delayed departure when my wonderful 4x4 electronically equipped vehicle could not get out of the mud where it was parked. I had to wait until the cars around me had gone and could then take a ‘run at it’ to get back onto the forest road.

On a more positive note I walked back from the finish with a NGOC member who had moved house into Wales and said that he ‘really missed the O events on the Quantock Hills, despite the steepness’.

Phil Sorrell didn't have time for a run as he was helping Al and Sebastian tackle the Yellow in the absence of a White course. Sarah took the opportunity to run a Blue course, having risen through the ranks from Orange since early autumn!

From his run Martin Lewis gained his highest national ranking point score since entering the sport two years ago.

You may be familiar with the Christmas Novelty events each club seems to put on annually; each year some bright spark comes up with a new concept like having to sing a Christmas Carol or answer a seasonally-themed quiz question at a control, or chase a Santa. On Saturday I devised my own format but it didn't actually make me feel that festive. It did go something like this though...

Attend your work Christmas do the night before. Then after a sub-standard sleep drive to an event at least 80 miles away. Just sign up for the course you'd normally do - it will actually feel like 'running up' (a Black course in my case). Get going as close as you can to the Start window closing. This simulates the time pressure Santa feels under delivering to a few billion addresses in just a few hours.

Like all novelty events, this clever format gives new life to an area you thought you knew well. But probably isn't advisable when it's your first ever time there.

Next bit, over several controls, you get accompanied by someone who's constantly and loudly berating himself. Maybe this bit's a nod to the trapped feeling you get stuck with 'that' in law or relative on the big day? Anyway, I was really struggling to concentrate after 10 minutes of this guy hollering on about his own navigation.

Next some traditional party games - let's start with the hokey cokey.

You try the left platform, the right platform / In out in out shake it all about / Return to the same path then you turn around/ That's what it's all about, see

Repeat several times for half an hour. Unsurprisingly, I 'performed' the routine with several partners over that time, hunting out said platform on a muddy, steep slope. This didn't stop someone else finding it in 90 seconds though; my repeated failure to establish a suitable attack point was to blame.

For the required choreography, see Routegadget, with emphasis on step 12

Next hunt the thimble (not sure whether this is a festive game?). Didn't bring a thimble? Let's use car keys instead. But not much fun played at download when you're freezing and you've retired from your course nine controls early though. Unwittingly taken by another Ford owner, my keys were returned to the key box just as I was considering asking around for lifts, accommodation or spare clothes!

'Tis the season to be jolly (etc)