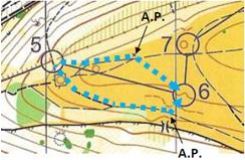 An attack point is a place where you might leave a path and head off on a bearing towards the control. They are used on all courses from orange upwards.

"Attack point" may sound aggressive, something for the advanced competitive orienteer, but actually attack points are used on all courses from orange upwards.

An attack point is a place where you might leave a path and head off on a bearing towards the control.

Here is an example from the orange course taken from the 2012 QOFL at Cothelstone. Control 6 is off the path system, and is in a re-entrant so may be difficult to see from a distance. So navigating to control 6 could be tricky. I have marked two possible routes to the control, both using attack points.

One option is to head uphill to a path junction next to a bench (the x symbol on the map is simply an "object", but in this case it is a log bench). This is the attack point from which to head away from the path to the control.

A second option is to head south around the fenced enclosure and follow the path until it passes a gate. This is the attack point from which it is a short distance uphill to the control.

Choosing the attack point is the skill to master here. I could have taken a straight line on a bearing all the way from 5 to 6, but over that distance I could drift one way or the other and miss the control.

So it makes sense to choose an attack point that is close to the destination control.