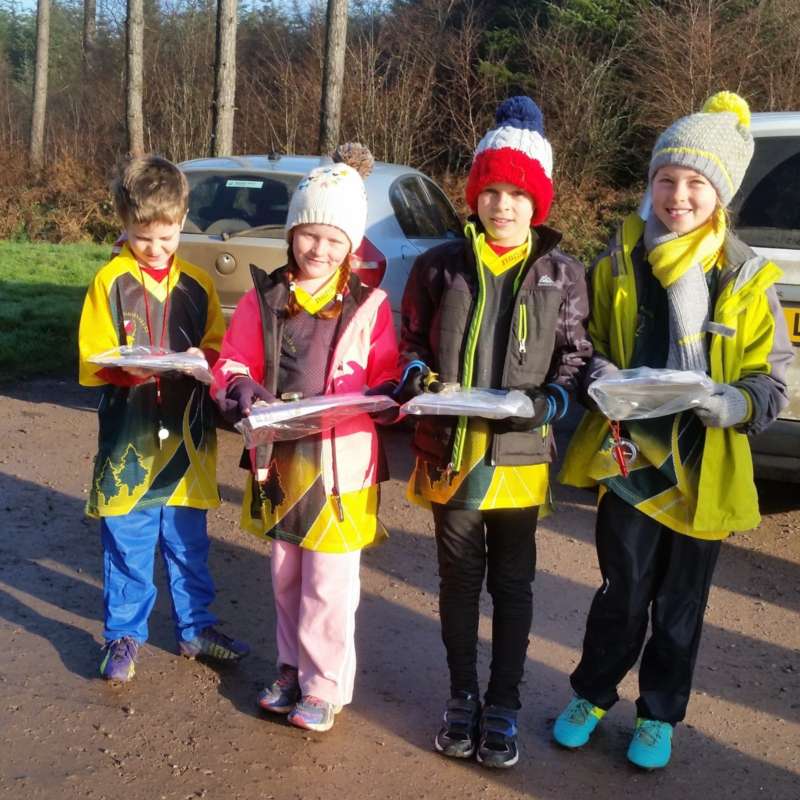 Who got QO tops for Xmas? Sue's grandchildren, L-R: Freddy, Erin, William, Martha, who all starred in the JOG season just gone

Judy Craddock reviews the second half of the JOG term just ended. She recounts surreal scenes at the Huish Wood scout camp which played host to a variety of groups one Saturday lunchtime, with JOGgers dodging scouts in pink tutus and posh diners...

Mark Maynard was the planner for the Huish Woods JOG on 5th November.

Mark was instrumental in getting permission for using the area as he has strong ties with the scouting movement. Several other activities were taking place at the same time and caused diversions! On the one hand there was a “posh” meal taking place in an adjacent hut..wine and all! On the other we had 18 year old scouts prancing around in pink tutus, I’m still not sure why.

However once we had come to terms with this we had a great event with a good turn out; 21 juniors and 9 adults running the courses and 11 accompanying adults. This is a brilliant area for JOG with 3 distinct areas of terrain, one with a complex path system.

...was the venue for the JOG/ QOAD on 19th November. Brian Pearson planned and made good use of the area with the longer courses crossing the road and going into Windown. The southern part of this area has been hard to map as it’s used by dog walkers and the paths are constantly changing so Brian used earthbanks where he could for the junior courses. He also kept the juniors to the wooded areas and the open common, leaving the more complex northwest and Windown sections to the Badger and Fox competitors!

The Kingscliff JOG and QOAD was just a week later and this was planned by Jim Mallinson. Parking was a problem as the area around the start had been churned up by the forestry trucks extracting timber. The weather was threatening and drizzling and we had a disappointing turn out, with a total of 30 people attending the JOG. Rog and I were unable to stay for the QOAD but 18 folk came to brave the wind, rain and mud.

(the piece that follows is a repeat of the report Last JOG of term which includes extra pictures...)

After the mammoth effort of the QWO, we found some relief putting on a simple JOG event at Longrun Meadow.

Andrew Page (age 12) designed the courses helped by Chris Philip who used the Purple Pen program to draw the courses on the OCAD map produced by Jim Mallinson from the original done by Dave Holmes. The four courses varied from a sprint round the Oak Barn field for the Hare course, to the Fox course which provided a challenge to the experienced Orienteers who had to find as many of the 25 controls positioned round the Meadow as they could .

Martha Macpherson (W9) again whizzed round the Hare. Up to the Squirrel level next term, Martha! Jenny Wood (mother of Ben West) ran an excellent Badger course. A late arrival on the Fox course was an accomplished orienteer, Graham Hartley. He showed how it was done to the other runners, Kieron Hopkins (M14), Thomas Hasler(M14), Adriana Lapinska (W14) and Judy Nesbit (W55). 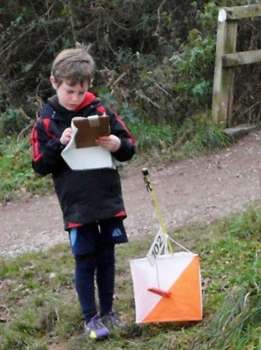 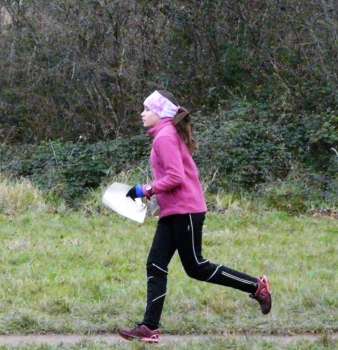 Adrianna on the Fox course 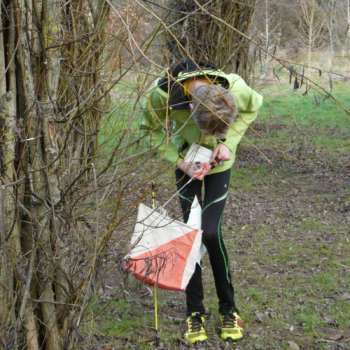