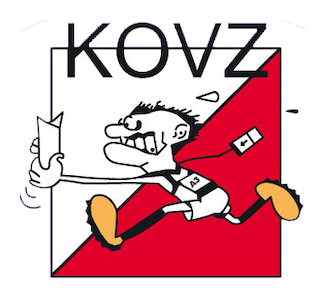 Seasoned O travellers Andy Rimes and Rosie Wych saught out fresh terrain in the Low Countries...and of course the chance to add another souvenir O top to their collections.

Amazingly, the intriguing series of inland dune areas over there might not be used again - Andy and Rosie report.

For the second part of our summer orienteering trip, Rosie and I drove to Northern Flanders to take part in this relatively low key event hosted jointly by a Belgian and a Dutch club. Two events took place in Belgium and two across the border in Nederland. The areas used in Belgium were forested dunelands, in Holland the area featured more open areas with lots of actual sand. After the excessive heat, steepness and technical difficulty of our previous event in Slovenia last month, the complete lack of any hills hereabouts surely meant the orienteering would be physically (and technically?) a piece of cake..... 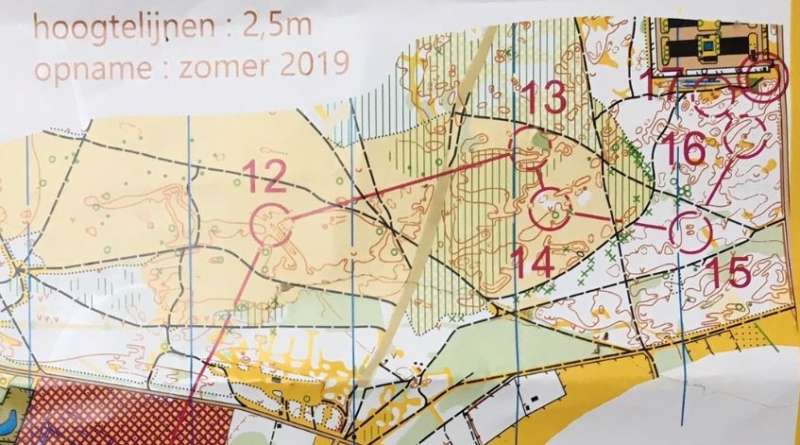 The warm up day on a Belgian military training ground with an excellent event centre in the military buildings. The facilities provided included cafe, bar and showers with lots of seating. No traders were present for the whole event. The weather today was excellent for our early runs but showers forecast for the later runners. Organisation was typically slick and trouble free with English being widely spoken. The walk to the start was long going through the competition area- shorter courses including Rosie’s had a second, closer start arena.

On picking up the map, at 10000 with 2.5m contours it was obvious the land relief detail was subtle and technical with lots of green making navigation ‘challenging’ at best. As always on a new area I initially adopted a careful approach as keeping to any bearing was extremely difficult given the dense areas of miniature spruce saplings forming the forest undergrowth. This conservative approach although slow was rewarding and I emerged from the first technical half of the course mostly error free. 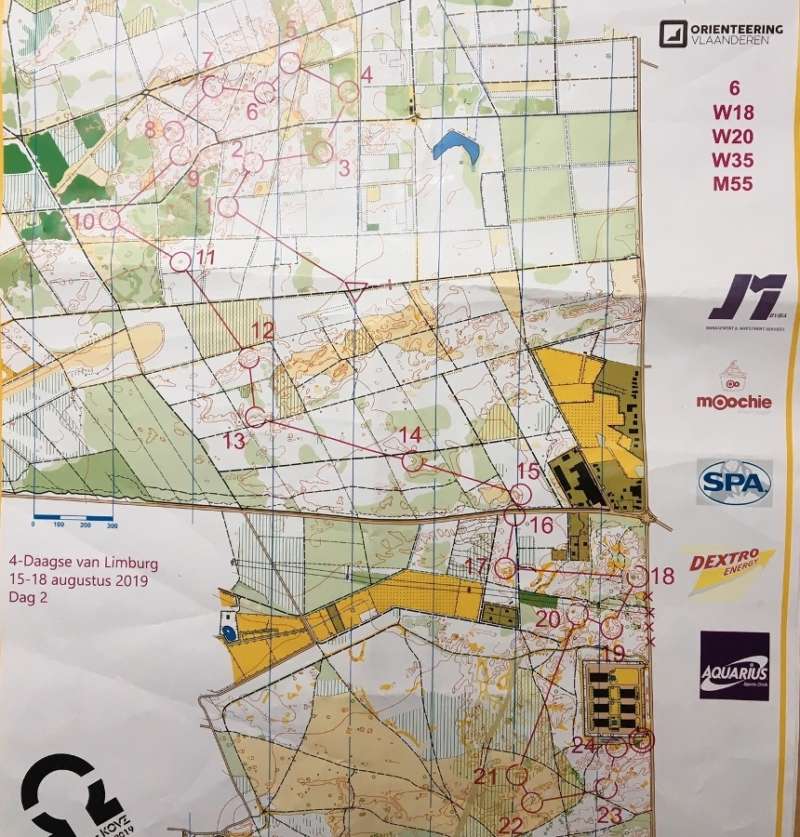 From here the course crossed into the open area in the north part of the map and my good fortune and good humour collapsed like a veritable house of cards. The navigation should have been much simpler on open heather covered terrain much akin to Exmoor but several times I either overran or completely misinterpreted the detail and wasted vital time doing the headless chicken Hokey Cokey. One 20 minute leg searching for a small depression in a sea of unmapped ones sent me tumbling down the results table- not a good start to the weekend!

Rosie says: Andy descended into a deep gloom after the first day- cursing questionable mapping and the use of EMIT! My 4th place had been a considerable surprise after at least one disastrous leg; however the results showed similar failings from all but the first place lady.

So, on day 2 the usual resolution about keeping in contact with the map. This worked for a grand total of one control but the attack point off a track bend for the second just did not work. After that I benefited from being in a chase of three obviously on the same course and we all vied for the lead. End result again fourth place. Andy fortunately returned much happier and not packing his bags to go home. We then spent a thoroughly enjoyable sunny afternoon visiting an outdoor interactive museum of Flemish farms, buildings, windmills - the top visitor attraction in these parts. 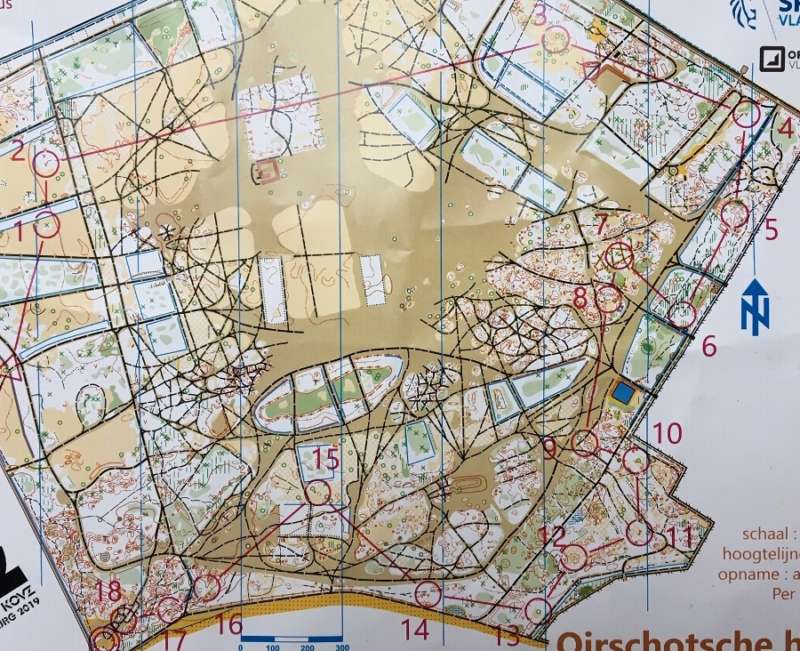 Andy says: The first of two days across the border on the Dutch military training ground just outside Eindhoven. The map according to the organisation’s publicity literature has the nickname ‘where God invented sand’ and features a vast open sandy plain, and a highly concentrated area of knolls and interspersed depressions appropriately named ‘the field of knolls’..... and so it proved to be. In somewhat depressing light drizzle my course effectively circumvented the mapped area clockwise. Again, a lovely technical challenge where the complex terrain ensured concentration was paramount.

My smugness at the finish...was quickly eroded at download

The necessity to concentrate was compounded by the physical requirement to traverse the huge loose open sandy areas featuring multiple deep tank tracks and the myriad of confusing paths and tracks. Given that, my smugness at the finish when I found I had completed my course in a few seconds over the hour was quickly eroded at download when it was apparent most of my contemporaries had also enjoyed good runs on the relatively fast terrain- oh dear.

Rosie’s course did not get to the infamous knolls but turned out to be the decision to go direct or round the purgatorial sandy tracks.

Rosie says: Adopting the cautious approach turned out to be a mistake on many legs as controls generally were easy to find. An error near the end however in taking a general bearing across a sandy area and pinpointing the wrong patch of trees cost three to four minutes - enough to drop two places from my usual 4th - however hopefully the bigger time differences from Days 1 and 2 would be in my favour overall.

All to play for on the last day when the most technical area is promised. Usually the last day has been a disaster! 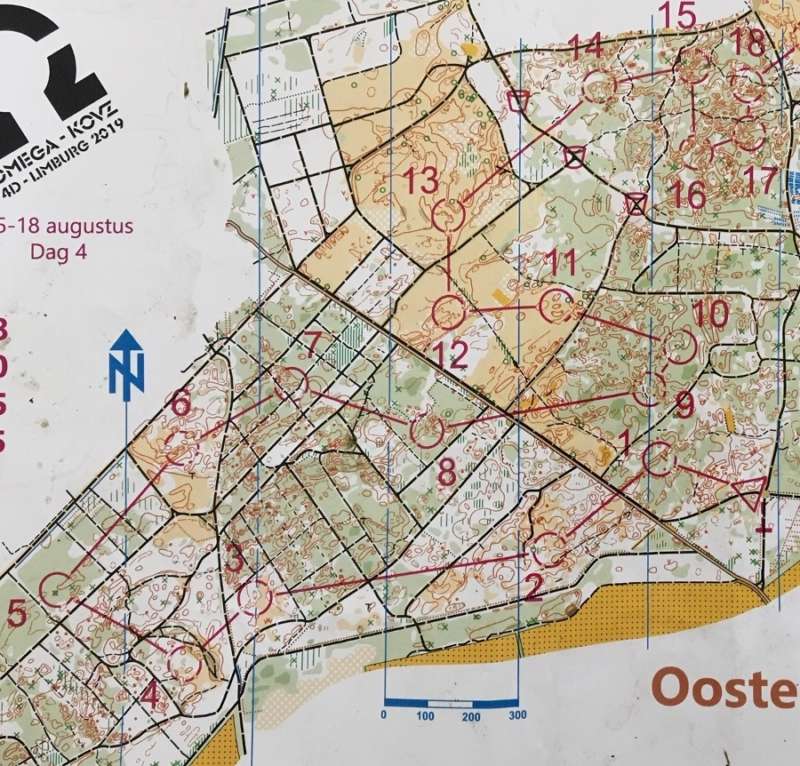 The main part of Andy's course on Day 4
Credit: 4 Days of Limburg

For the last event of the weekend, the organisation had promised the best and most technical orienteering of the four days, so even when we woke to biblical rainfall we weren’t too dismayed. The area was the western extension of the day3 area but with more forest and therefore less open sand. The rain was set to pass through by lunchtime but nobody had obviously told the rain that and it continued unabated all day.

On picking up the map at least the orienteering was to be absorbing- a wealth of intricate and complex contour detail with much of it covered with a green forest overlay meant keeping to any bearing between controls would be challenging but key to success. The rain rapidly soaked you but it was warm enough to ignore this and become immersed in the absorbing navigation.

The rain was set to pass through by lunchtime... but nobody had obviously told the rain that

The choice offered was a longer but safer route using the tracks network, or to grab the bull by the horns and tackle the terrain directly- I opted for the latter whenever possible for the practice (and my result for this was not going to make a huge difference to the final positions anyway). The orienteering was exactly as expected- physically (given there’s theoretically no climb) and mentally a challenge in beautiful forest with hardly anyone around- I was one of the very last to start today.

On returning to the excellent event centre, in a large restaurant complex, and talking to some local orienteers, we learnt that we were very lucky to get into this area, as it’s likely that it will never become available for orienteering again. This reflects a sad situation throughout Holland apparently where it is perceived that the forests must remain ‘for nature’ undisturbed by humans. Let’s hope that situation never happens in the UK.

So, what is the attraction of these foreign events?

- fresh areas and maps - the joy of the new
- planning the whole outing
- a good reason to visit fresh parts of Europe and use as the base for a holiday
- the camaraderie of the other Brits from south west to do the usual post-mortem of experiences. Good then on return to see them at events on home turf
- although there are obvious travel and other costs the events themselves tend to be much cheaper than comparable British events, and one can proudly display ones event top! The Spanish event last year included entries, training maps, event top and a free dinner! 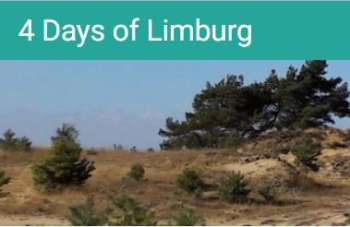