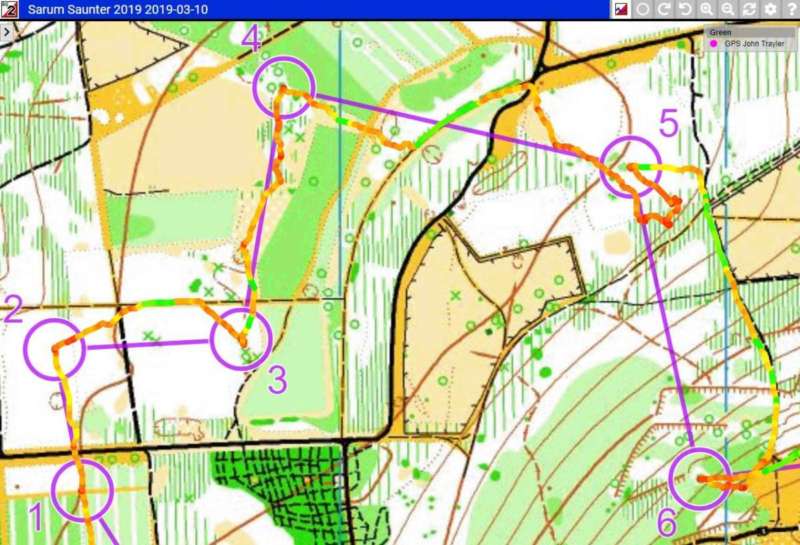 10 or so braved the winds at the national event at Great Ridge in Wiltshire on Sunday.

On Saturday Pen Hill near Wells hosted both a day and an after dark event.

Early morning starters had the bonus of beating the rain and hail. But they still had to warily cock an ear to the creaking of the branches above them. Yes, the strong winds threatened to pick up but never actually did.

We know Tony Hext completes the Green course in an hour with metronomic precision- and yes he did it again.

Stephen Lysaczenko reckons he lost "just" 30 minutes on the Short Blue course. He points out that's a big improvement on his times in the recent past. Keep up the progress Stephen, if you whittle that down you'll be amongst the pacesetters!

...that Routegadget trys to calculate how many minutes of errors' you made in your run?

Dominated by a radio mast, Pen Hill may also be memorable to some from our 2007 Compass Sport Trophy outing.

Angela Modica found the mix of runnable open land and steep wooded valleys there to her liking. She achieved 17/41 on the Green course. M55 Paul Roberts, who joined us in December, won the Short Green with a four minute lead over second place- clearly one to watch. After running nearly 7km to win the 'short' course at our Friday evening MapRun, Graham Hartley dropped down to Light Green for the day and finished runner-up. Janet Scott was in the top half of the field on Orange.

No QO's made it to the night event.