With a step up in age class, Andrew Page found himself let out of the park and into the streets, where he managed to beat some experienced campaigners in an impressive run down in Poole

Andrew was 2nd out of 17 on his course, finishing ahead of several established South West orienteers, including Cornwall OC's Arthur Boyt. QO's M14 matched the eventual winner, a local M50, for speed and led with a third of the race to go. It looks like he might have made a navigational error shortly after, easily done in the heat especially (ask those who went to Braunton)! Plus he took on a course much longer than those he was running last year, so well done Andrew. 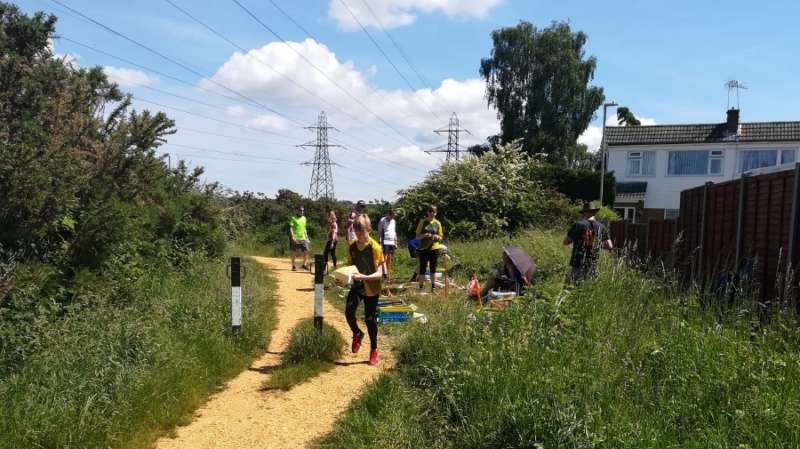 Andrew- starting off in the park
Credit: VP

Martin said: "I think it was at least 13km, but I kept running with only a few very short recoups in the shade. My longest course yet."

Those thinking of trying out an urban event, beware. Like events in woods, distances in urban events are measured in a straight line, even if there are buildings in the way!

Graham Hartley may have a tough task retaining his Green course crown but he's now strung together three decent runs in a row and stands a good chance of finishing in the top three if he can keep his current form up.

Graham sneaked into 3rd place on the day by just 9 seconds. The winner blitzed everyone though, taking 22 minutes (Graham was on 33 minutes). Steve Robertson and Tony Hext also went.

Having done respectably on the Blue course for a while, Graham Hartley returned to the Green course, finishing 5th behind some leading orienteers. The exceptionally close battles Graham had with Bristol OK's Alison Simmons last season look set to continue, with the nationally-renowned BOK W60 finishing less than half a minute ahead of Graham this time. Richard Sansbury and the Modica family also ran.

Oliver Lewis and Roger Craddock were amongst 15 who ran at Devon OC's evening street event on a glorious evening down on the south Devon coast. Points were scored by visiting various items of street furniture.

The next in the series is at Exeter on Thursday 14 June.

Graham Hartley (who else?) is planning the event at Sidcot School on 13 June.