At the start
Credit: Scott Bailey

After several years of intermittent orienteering and social distancing, Club Captain Pete and co-ordinator Phil decided to use the Yvette Baker heat at nearby Wavering Down as an opportunity to put together a junior squad and have a bit of a social.

The Yvette Baker Trophy (and Cup for smaller clubs) is an annual inter-club competition for juniors named after one of the most successful British orienteers.

On the day before the event, 8 juniors met in Long Run meadow in the sunshine for an orienteering themed social event. After a distance estimating exercise, the juniors (and some adults) formed teams of 3 for a single leg relay using the Permanent Orienteering Course - each team had a short, medium and long leg. Finally, everyone was split into 2 teams for games of capture the flag - there was a mix of team and individual strategies, but both teams were equally matched. Thanks to Chris for coming and helping, and Roger for organising the equipment and map printing.

It was swelteringly hot on Wavering Down, with a 20 minute 'warm up' hike to the start for the 14 QO juniors. Despite having a squad half the size, the team put up a fantastic challenge against local rivals BOK - coming in 2nd place with 884 points.

Al Hemmings had a consistent run in 5th place on the Yellow course, with Sebastian Hemmings and Ilyaseen Jaradat leading the Yellow Boys in the competition. On Orange, Jacob Chattell and Annabel Carter were just 5 seconds apart in 6th and 7th, with Jacob Shirvington and Oliver Lewis nearly a minute apart in 10th and 11th. Finley Goddard would have had a competitive run but unfortunately an easy to make error on a single control put him out of contention (well done for persevering Finlay!). Lucy Bussell had a good run coming in 1st out of Light Green Girls and Hamish Braine-Clarke came 3rd out of Green Boys.

Phil, who helped coordinate the team:

All the juniors in the squad were so enthusastic and it was lovely to see everyone enjoy themselves. Thank you to everyone who took part (and for the adults for getting them to the events). I look forward to see you all after the Summer.

After everyone had finished, a few families stayed afterwards for a picnic and cake (bought from the South West Junior Squad cake sale). Thanks to BOK and all the volunteers for putting on the event. 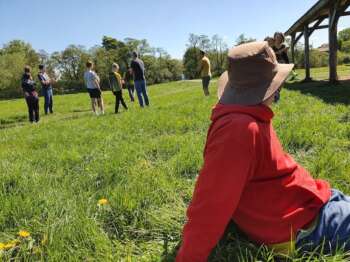 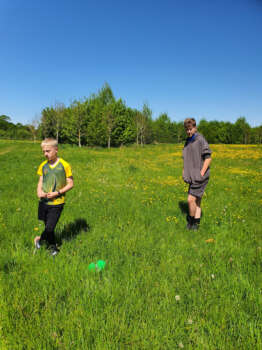 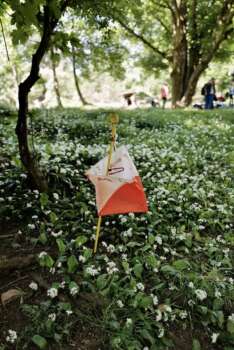