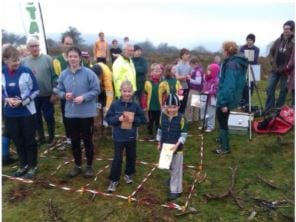 On their first competition on open moorland in damp conditions, all of our enthusiastic but inexperienced team put their JOG experiences to good use, and without exception all of them put in creditable runs against a strong Devon Junior presence. Lead coach Nick Fernandes reported...

Whilst not being renowned for our juniors, a team of 12 enthusiastic JOG orienteers represented QO in the Yvette Baker Trophy Qualifier on Holne Moor on Sunday 13 November 2011. On their first competition on open moorland in damp conditions all of them put their JOG experiences to good use and without exception all of them put in credible runs against a strong Devon Junior presence.

After negotiating the car park entrance, with pushed assistance in many cases due to the muddy slope, the team congregated around Judy and Roger‘s car to collect dibbers, compasses and coach‘s pep talk. A 1k walk to the start as a warm up and then an explanation of how the start procedure works as they were not used to the box system. With Amy, Jo and Tate off first the team were ready. With the start kite out of view, and approached using a taped route, it did prove confusing for some and led to some long times to punch the first control. Once they got used to the leats and earth walls as line features, the soggy shoes, a very orange map and a few navigational errors sorted out by asking or joining forces all of them completed the course smiling and at a sprint as demonstrated by Tom Haslar below. 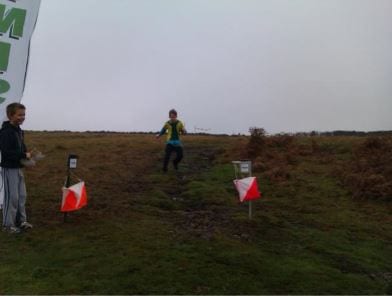 Unfortunately we did not qualify this time but it has given all of them a taste for competition and I expect we will see them at QOFLs in addition to the JOG events as they hone their skills in preparation for next year.

The QuOncile editor Adrian Edwards said "I'm sure they would all like to thank Nick as well for his coaching and encouragement".