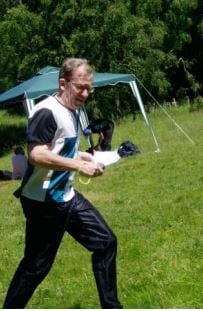 Richard Sansbury's quick thinking saved his team from disqualification, after his missing a control out threatened to make a 200 mile round trip up to north Wiltshire count for nothing!

It was a hot summer's day as we arrived at West Woods near Marlborough after the 100 mile drive from Taunton. On our second attempt we found the registration in a sunny meadow in the middle of the forest. After the usual formalities we found a shady place to wait and discuss our plan. The NWO relay comprised three short courses, six runs in total, but only one map and dibber per team. There were three in our team: Jeff Pakes, Dave Holmes and myself so we would each run two courses.

I was first to go. From the mass start I was one of the first away but with two chasers close behind. However I was faster over the rough forest floor and got to control no 1 first. Keen to keep my lead, I then tried to put some distance between me and my pursuers in the next leg, but rather predictably made the mistake of overshooting the control. I then had the embarrassment of meeting my pursuers coming the other way as I retraced my steps. Now behind I put myself under pressure to catch up and closed some of the gap over the next 2 legs. I lost sight of them as we thrashed through some thorny vegetation to return to assembly, and as I handed over to Dave it turned out we were in 2nd place. Dave headed off to repeat my course as the rest of us retreated to the shade to wait. After a while runners started to return - where was our man? 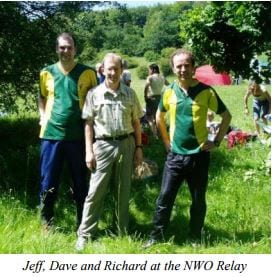 Then Dave emerged out of the rough, looked at his map, and promptly turned round and went back in again! What was he doing? He was going somewhere I hadn't been. Doubts started to creep in. So I stepped forward and interrupted Dave's handover to Jeff. I immediately saw I had missed a control. So not 2nd place but disqualified! Disaster! One mispunch eliminates the whole team and make our 200 mile round trip count for nothing. I don't think Jeff and Dave would be too impressed. As Jeff headed off, I went to consider if anything could be done. A discussion with the organisers revealed I could run my course again.

This would add 20 minutes to our overall time, putting us well behind the winners, but at least we would have a team result. Disaster avoided. Apart from my mistake, everything went well. Jeff and Dave put in good times. The planner had arranged the three courses in different directions, hence the choice of assembly in the middle of the forest.

West Woods is a good summer venue and could support a much larger event than this. The only real problem was that with this format the whole competition stretched for well over 2 hours, and two-thirds of the time was spent waiting for your team-mates to complete. Perhaps two maps between three would have made things more interesting and tactical. After our seven runs our team finished in 8th place out of 23 teams. Not bad, but we could have been 4th had it not been for my error. Sorry folks.