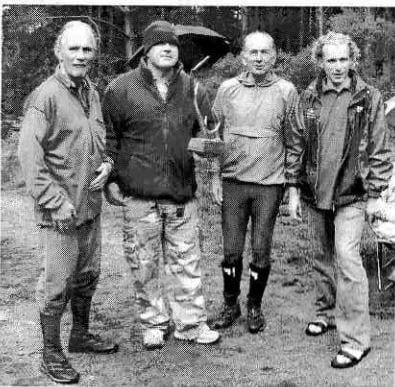 The first of two consecutive series wins, before the region's dominant force Wessex Raiders took over for the best part of the next decade!

At Ashton Court QO came in a very creditable 4th place. Jim Mallinson, Martin Longhurst and Mike Crockett were only a couple of minutes from second place.

It was quite a battle at Culpeppers Dish. Decisions had to be made from an early stage. Firstly it was team selection, with nine club members present, who to press gang was important. The final decision was Ted Heath, Brian Fletcher, Pete Darton (a new member) and Mike Crockett. Secondly as the rules were slightly complicated- three courses, two of which had to be run twice and the others four times, a plan of action scribbled down at breakfast needed to be studied and approved. Once the theoretical solution of keeping the light green map moving was understood everything was in place for the best result. Handicapping seemed to benefit the older runners and two teams started about thirty minutes ahead of us. However the plan worked and we beat Wimborne by the slender margin of 47 seconds.