Mike Crockett relives the season gone by, including being presented with the Devon relays trophy only to discover another team had won! Before the engravers had got their hands on it of course...

QO was one of only two teams who competed in all five of the events in the series. Wessex who had a very strong team was the other. The fourth event was the Devon relays, traditionally one in which we do well and being a handicap Brian Pearson, Richard Sansbury and myself travelled to Dartmoor for a Harris type relay with high hopes of a good result. The Harris format is basically a score event in which six controls had to be visited by all three team members and the remaining 18 controls by just one.

Good planning was essential and if they get it correct all three members should arrive back at the finish at the same time. This we achieved fairly successfully. The handicap time was applied after the race was finished and so the wait in rapidly deteriorating weather was tense. Brian and Richard had to leave and so I was left to receive the result and pass it on later in the evening. Sue Hateley the organiser poked her head into our van and announced that prize giving in five minutes and we had better be there.

Good news! Alan Simpson, the Devon Chairman presented me with the Byfoot trophy for the leading team in the handicap but Wessex not surprisingly had won the overall prize. I duly passed on the good news to the others. However a close look at the results on the website revealed that there had been a miscalculation and Wessex had also won the handicap race. Luckily, I hadn’t rushed to the engravers with the trophy but I still had the dubious honour of presenting the Byfoot trophy to Wessex at the next event together with the Chairman’s Challenge trophy for winning the overall series. Wessex had a clean sweep of all five events. Quantock came a very creditable second, and were duly commended for our sportsmanship in pointing out the miscalculation. 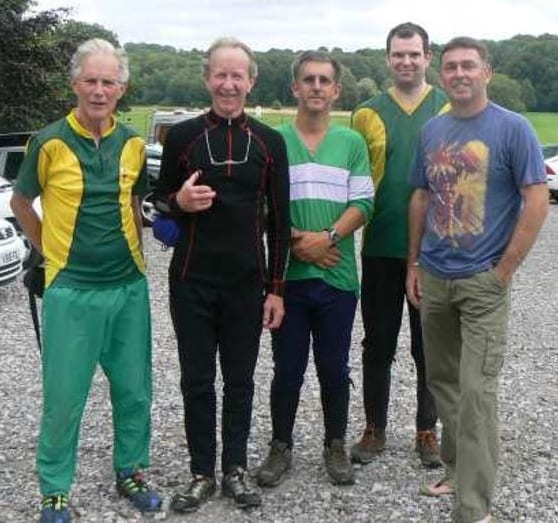 Mike Crockett assembled a team of five for these relays. Graham Hartley, Ron Foord, Jeff Pakes and Tim Spenlove-Brown, joined him at Bryanston School near Blandford for this complex event. Set in the beautiful parkland surrounding the school were four courses – two Cross-Country (2.0 & 1.8 Km), a Map Memory (2.1 Km) and a Sprint ‘O’ around the campus (2.1 Km). Each course had to be run three times by the team with all members running at least one course. There were generous age handicaps for which some of us were grateful! Mike with advice from Jeff Pakes produced a plan which drew on our strengths – Graham and Ron ran three times and the rest of us twice.

There were a number of changeover box controls, to be used by finishers on different legs, which needed careful attention and we lost a little time 10 on some changeovers as a result of not being aware of which box to punch. We were certainly not the only team to be troubled by this – it was amusing to watch two of the highly-talented RMA Sandhurst Team only achieving one handover after much confusion and shouting! The courses were all in good, open, runnable terrain with the emphasis on speed. Small mistakes, as usual, cost dearly especially towards the end of a course when tired runners where less able to make up time. Overall we finished eigth of the sixteen teams competing. There were regrets over performance and accuracy but we made our presence felt and certainly enjoyed the day