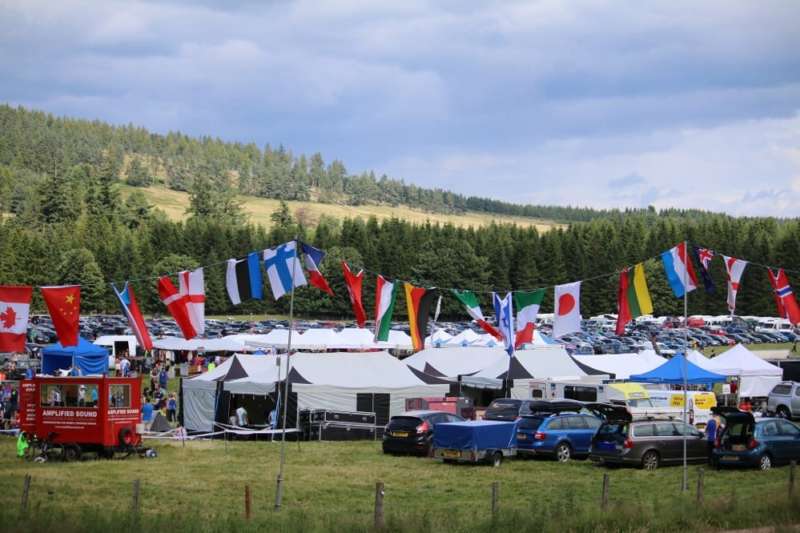 An amazing week we had on Royal Deeside! Fourteen from QO and JOG headed north, half being S6D debutants but some veterans of multiple campaigns. Forecasts of rain were mainly scotched; at worst we had mildy intrusive drizzle and at best, summer heat with bright and clear views. 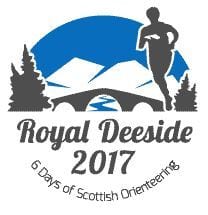 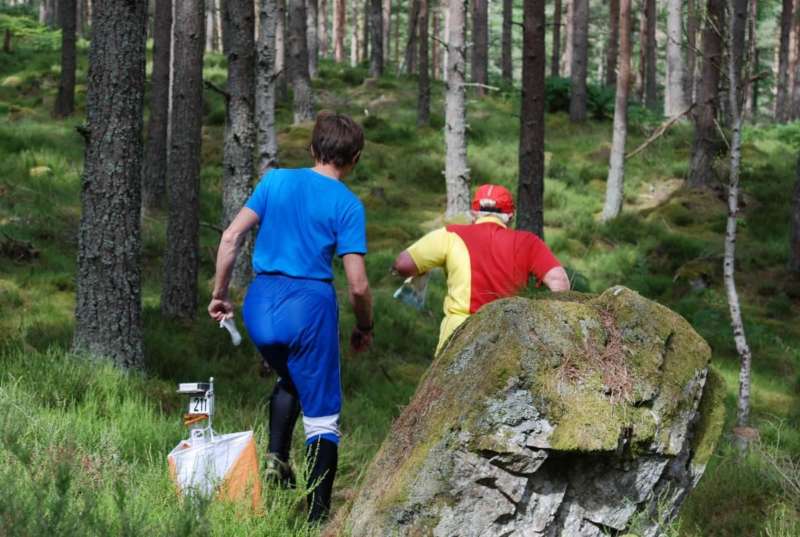 Note: links to illustrative photographs provided in the text below (it was not possible to show them directly on the website)

On a pleasantly warm day, the walk to the far start was alongside a sparkling, bubbling burn which seemed to go on forever, on a spongy narrow path that weaved in and around lush vegetation. The competition area combined smaller feature-rich areas with larger area of mainly featureless runnable forest, which lent itself to long legs between the more intricate pockets of wood. Particularly those of the "do I go left or right round the hill?" variety.

There was a solid start for our main hope for a medal, Bill, who was 4th on the M80 course, just over three minutes behind the Norwegian victor. Fellow Scottish 6 Days (S6D) veterans Adele Appleby finished in the top half on W50S (S=short) while Sue Gard (pictured smiling at the camera) and Steve Robertson fell just shy of the top half on Green and M60L (L=long) respectively. Of the debutants, Karen Lewis shone, completing the Orange (adult beginner) course in a brisk three quarters of an hour. 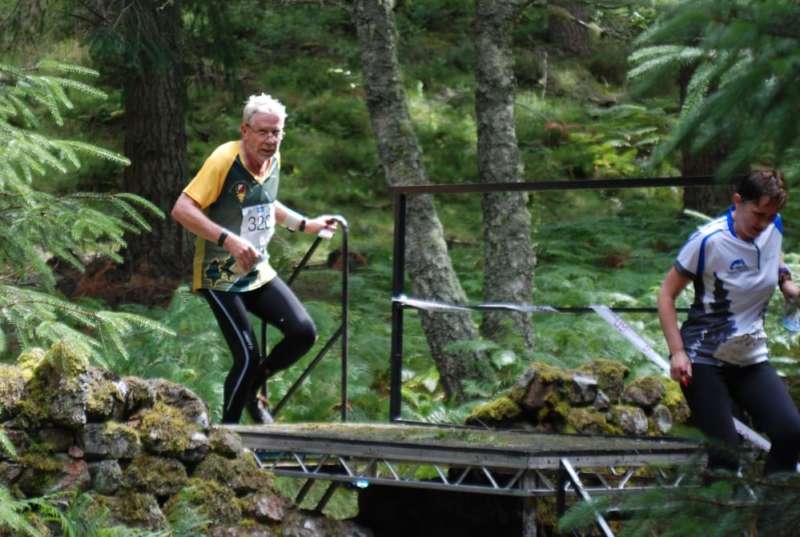 A brand new area of mainly runnable woodland with some large irregular shaped clearings and some complex contours in places.

Bill was runner-up albeit by 10 minutes to the Norwegian entrant who won yesterday's race and who looked set to dominate.

Of the six entrants from south west clubs on M45L, Jeff (pictured on run-in) finished second to Jeremy Tonge of Bristol OK, despite losing four minutes on a later control during an otherwise clean run. Jeff also earned a few seconds of fame on the You Tube video of the day's action. Steve (pictured finishing) recovered well considering he spent 10 minutes during the race finding lost glasses. Julia finished in the third quartile of those on W60S and Tony (again pictured on the run-in) had his best forest day, finishing well within double the winner's time on M65L. 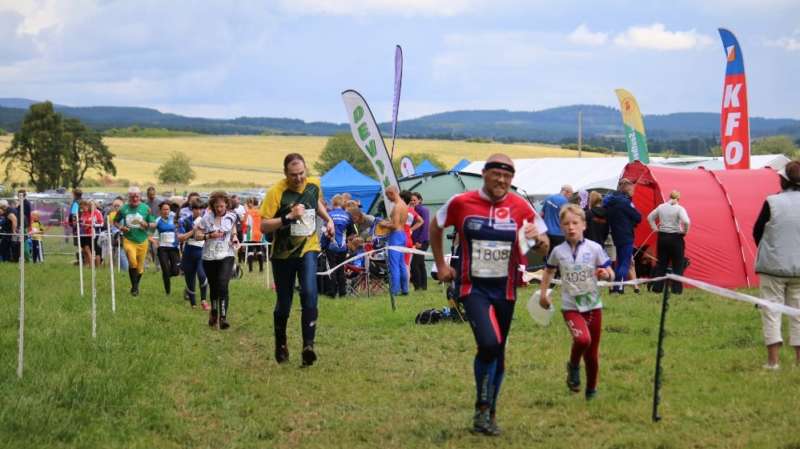 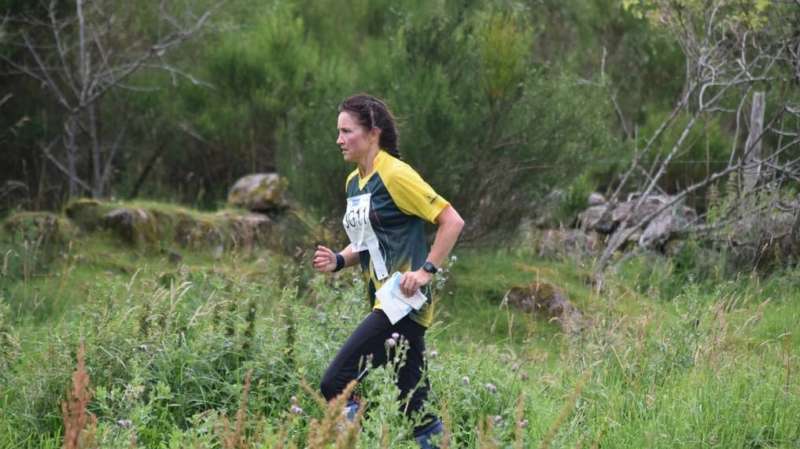 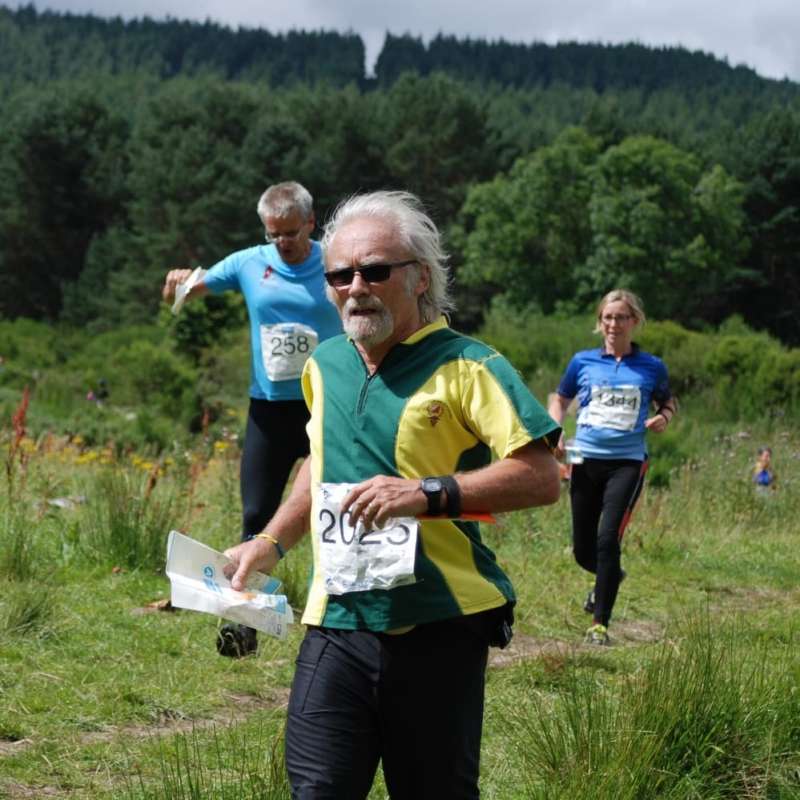 For those on the longer courses, Birsemoor was an area of contrasts requiring sudden changes in technique as you headed into a different part of wood. There were much more complex contours than on Day 2.

The M45L course started in quite fast runnable forest before heading into very technical area with boulders, small re-entrants and knolls everywhere. Walking pace suited best in there! Then a New Forest-like area of gentler contours and a patchwork of runnable wood, cleared areas and marshes. More runnable forest then a steep descent through assorted rock features.

Steve banished memories of yesterday's bad luck with a great run, finishing just outside the top quarter and taking less than 50% more time than the winner did. Bill was again runner-up to the Norwegian, this time by just four minutes. Julia (click link to picture) improved on yesterday, finishing above about a third of the W60S entrants. The Lewis's, by now acclimatising, had mid-table finishes on Orange.

Nice colours- but which club? 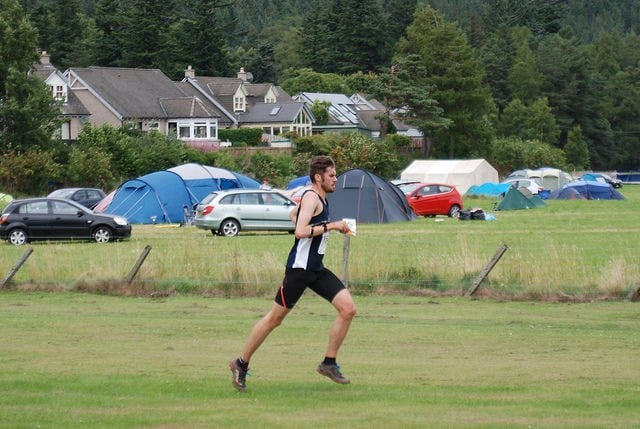 Another attractive village by the River Dee, overlooked by mountains and temporary home to many orienteers at the event campsite adjoining. The Braines pitched up there so Hamish didn't have far to go for what turned out to be a 10 minute workout! This was average for his age class. He enjoyed some long legs before a sting in the tail, a cluster of controls near the end. Mum Sheila came within double the time of the winner, multiple JK champion Clare Ward. Tony (pictured dibbing) had his best day and finished within 50% of the winner's time in the Ultravet Men's race. Some respite was due for Tony - his (and Steve's) walks to the Start on the first four forest days were the longer than anyone else's. In fact, each walk was longer than his sprint course, which measured a mere 2.4km!

The Robertsons also had a go at the Trail O, which they say they found pretty technical. 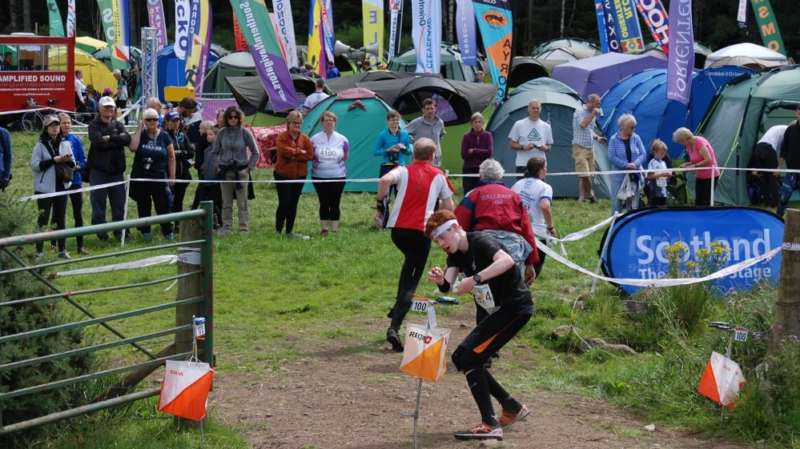 A spectator control near the finish at Birsemoor
Credit: Steve Rush BOK 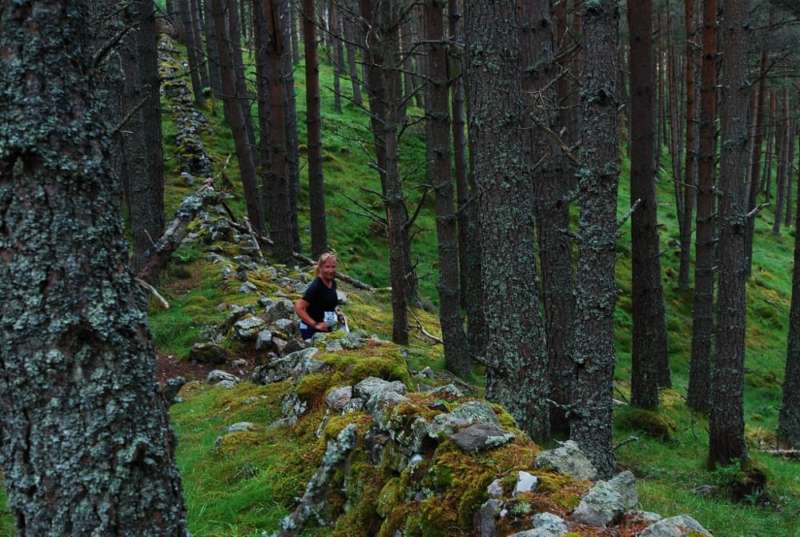 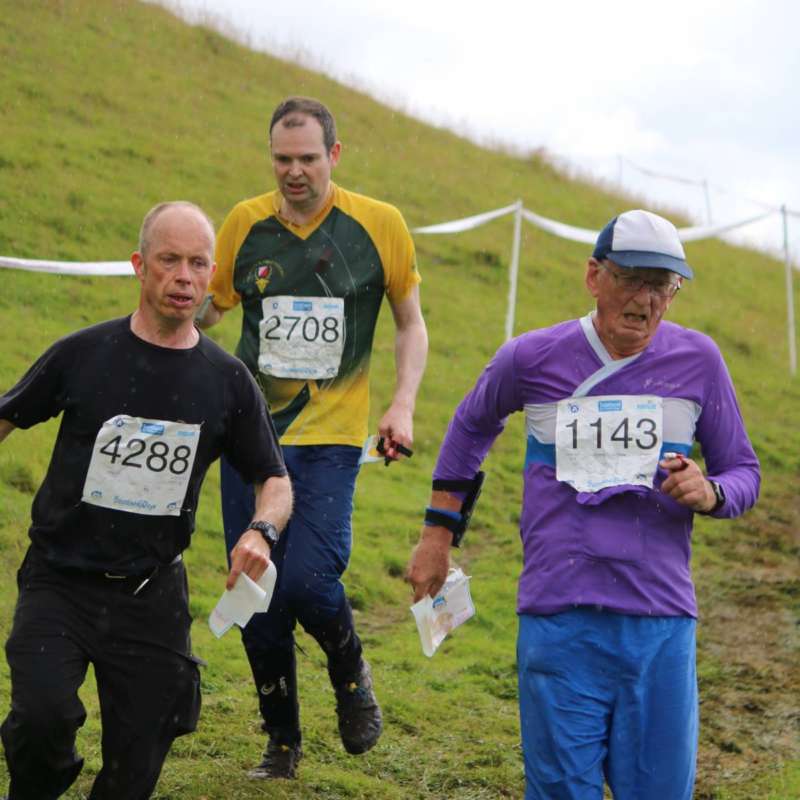 A large round hill beside Braemar with some lovely runnable but steep woodland, backed by a larger hill with some open moorland (link to map). Though they still had to walk up the hill to the start, the Robertsons, Tony, Jeff could by-pass assembly, all being based in Braemar. The Braines got to walk back afterwards, having transferred to the Invercauld Arms adjacent to the assembly area after a snapped tent pole ended their arrangement at the event campsite.

Bill chances of winning the M80 class were scotched by a parallel error which cost him nearly an hour halfway through his race; before that he had been winning.

An otherwise vertiginous descent to the finish was made bearable within the confines of a flatter, zig zagging route. Adding to the drama was a helicopter circling over the arena. An orienteer was treated for a heart attach at Aberdeen later.

Weather wise, yet another fine day- the only drizzle being that on Julia's lemon cakes later...

Afterwards, we were all kindly invited for tea and homemade cake at a Quantock clan gathering at the Robertsons', a stone's throw from the assembly area and identifiable by the QO banner. It was an amazing turnout, with 17 squeezing into Steve and Julia's holiday apartment in a converted church opposite the Invercauld Arms Hotel (the large grey building in the middle of the picture of the arena). All QO / JOG entrants came plus partners and Adele's friend Jean from Saxons OC. Quite a few introductions were made.

Maps were poured over, routes discussed and it was fun discussing each others' general experience of the tournament to date. It also gave Bill (pictured on run-in) a chance to laugh off his earlier navigational blooper. 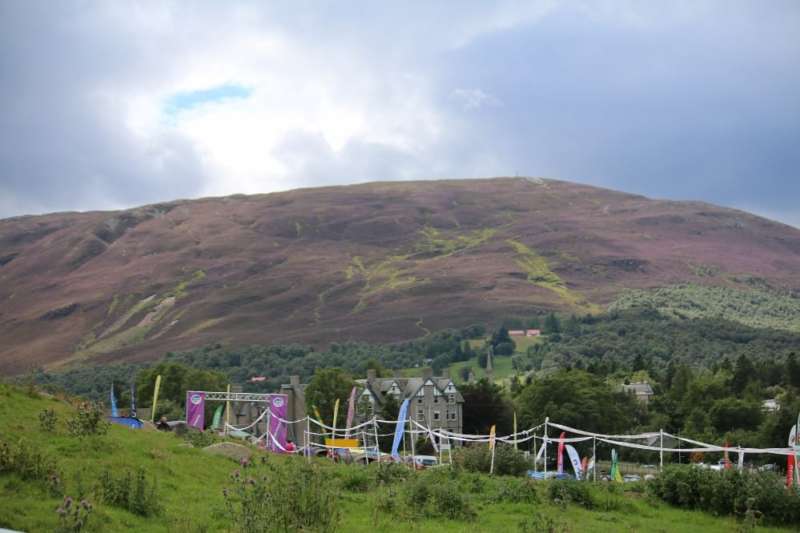 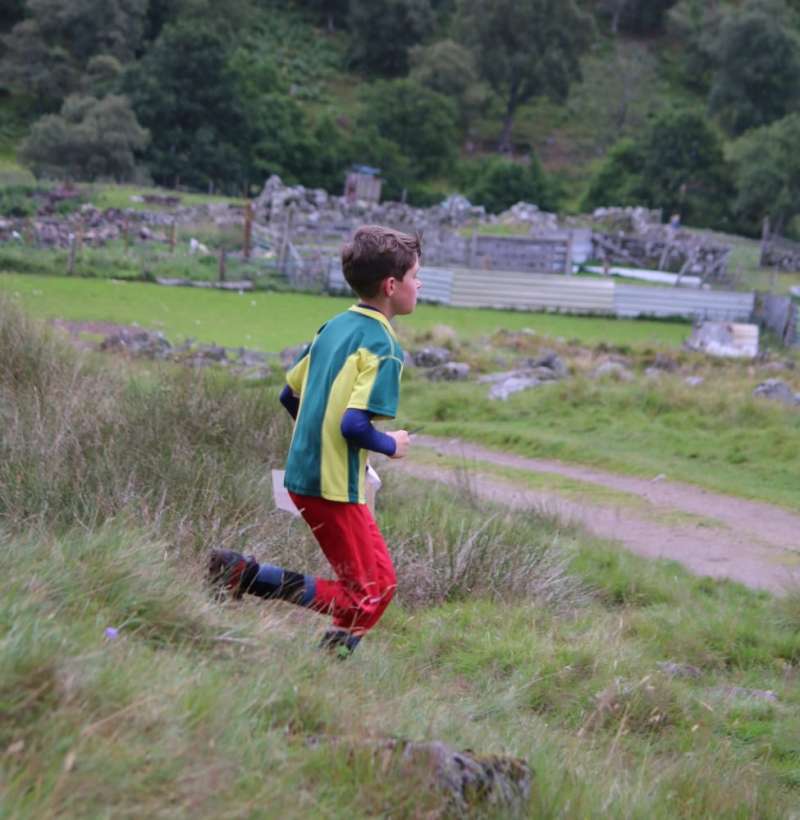 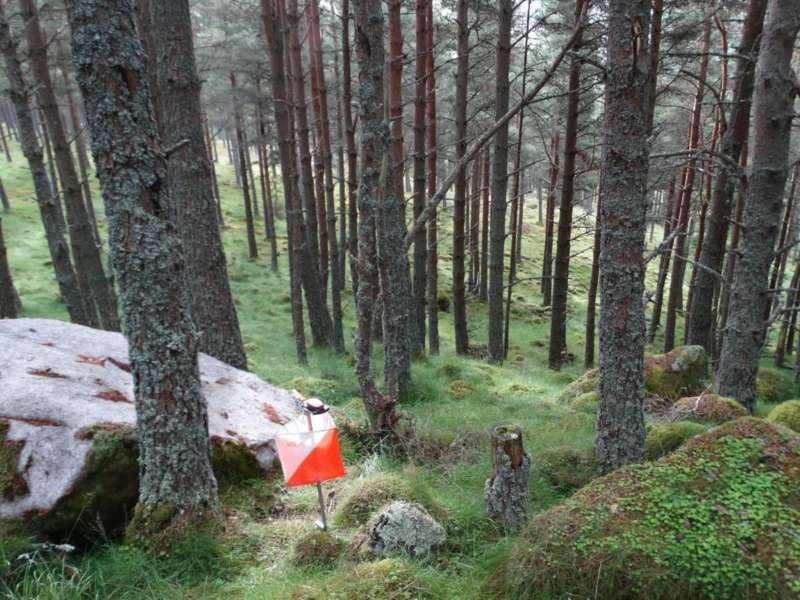 An interesting area with signs of old, walled enclosures and houses. Some courses again headed up to open moorland after a forest start that was mercifully near, given yesterday's climb.

Bill bounced back with a win on a day when his otherwise flawless Norwegian rival for the series title stumbled to 10th position. On the Braine's final day here, Hamish went out with a bang, finishing 5th out of 10 on M12B, only four or so minutes behind the leader. His results on earlier days were generally better than those published, as there were problems with his start times. Steve Robertson also had a good result, finishing 40th out of 90.

Julia again showed it is possible to beat people on a technically difficult course even when walking. The Lewis parties, more used to trotting round our JOG sessions, were by now averaging about an hour to get round the Orange course.

A missed control by Jeremy Tonge of Bristol OK meant that during the series Jeff (pictured collecting map) had beaten on at least one occasion each of the other five entrants from south west clubs on his M45L course. He also got to rub shoulders with elite runner and UK no.3 Graham Gristwood (known as "GG") at the start (pictured again). Needless to say, gee-gee was first out the traps...so Jeff, next time don't look so miserable at not being in pole position 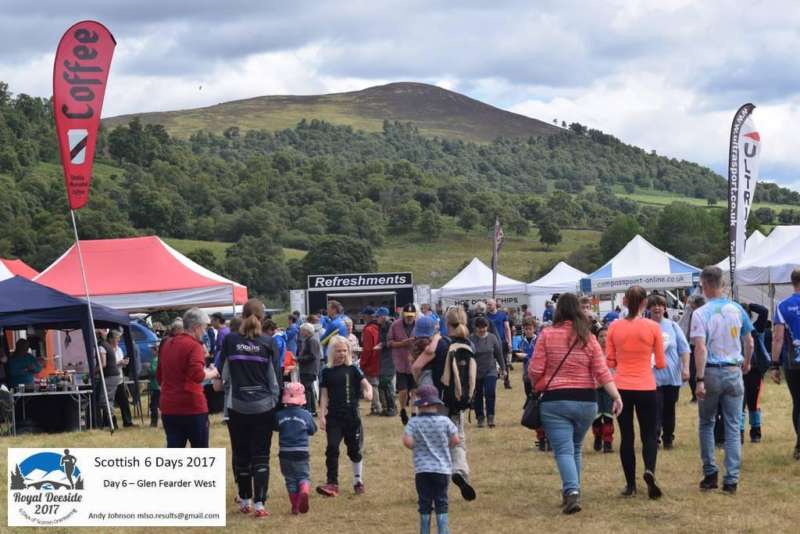 Contouring through the heather on the rocky open parts, day 6
Credit: Wendy Carlyle 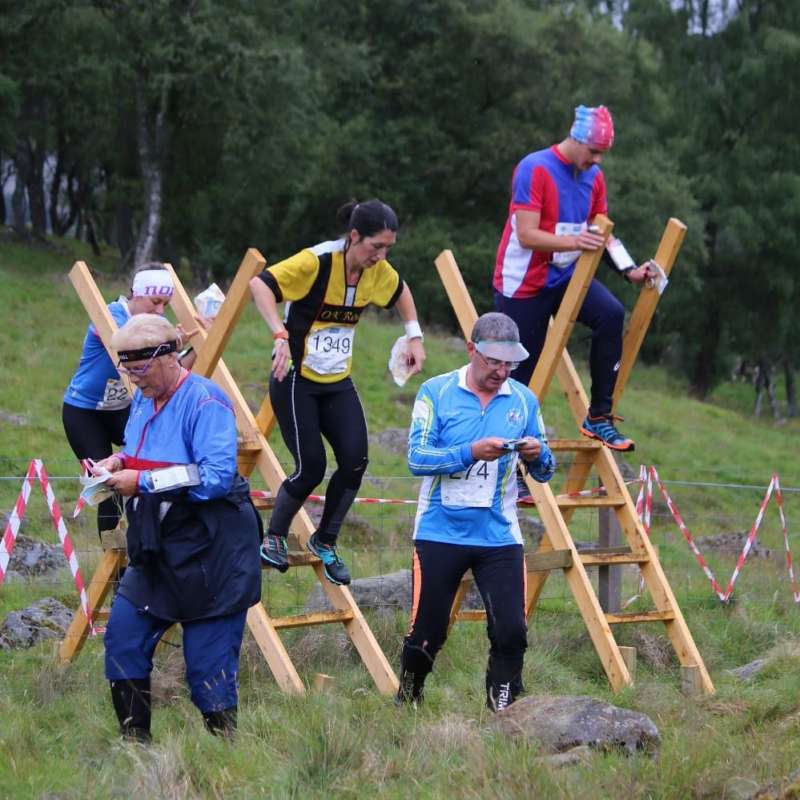 Early starts all round meant a quick getaway afterwards but less time to recover from yesterday. And although we were at the same assembly area as yesterday, there were more significant walks to the start (click for map). Unfortunately, Bill couldn't keep up yesterday's excellent form and had to settle for silver in the series overall.

The result of the day came on Orange, with Izzy's party enjoying a clear win over Karen's this time, getting round in 45 minutes and finishing about halfway down the field. 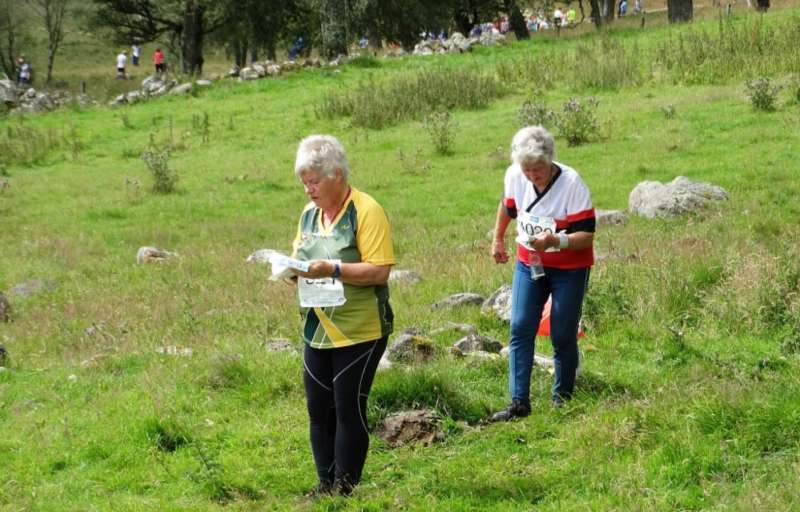 Laurence Johnson has made the above photographs to purchase only, hence only the links appear. See his photostream either side of those photographs for possibly more of the same subject - hen often took several in quick succession.

Because of common final controls, a comparison between all 3,000 competitors was possible on each day! There's a link on each day's results page. 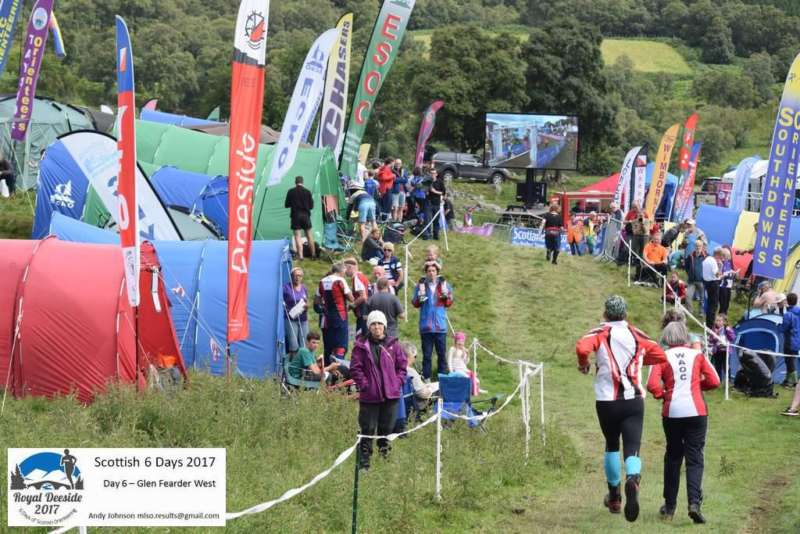