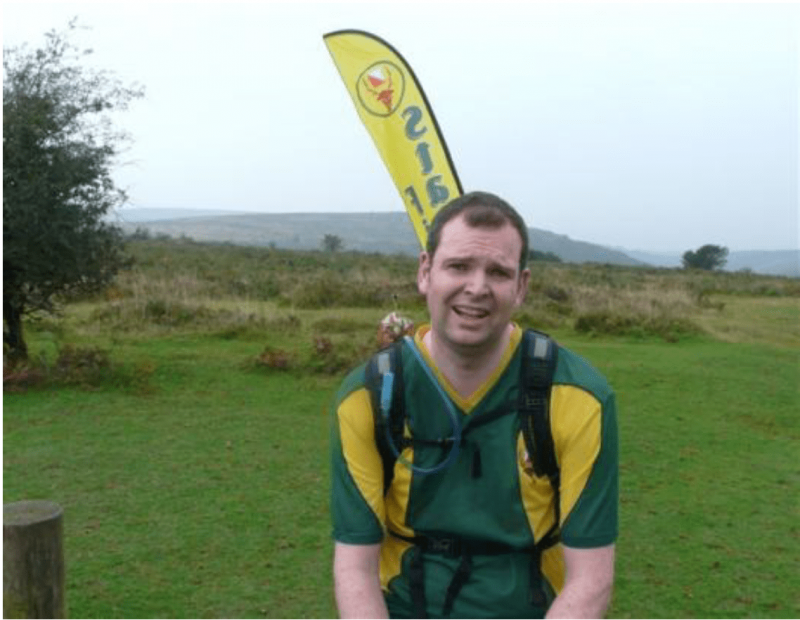 In 2013, the action was split between the Quantocks on Saturday and Exmoor on Sunday. Adrian Edwards ran the long course on both days. 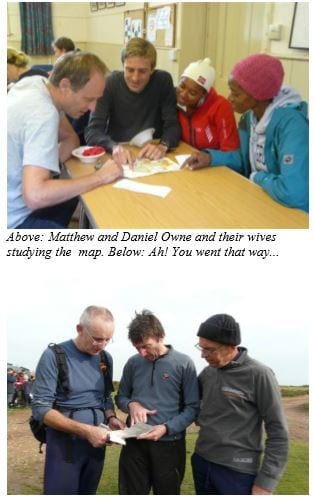 ...as I ascended the hill up to Crowcombe Park Gate – the sun had been shining half an hour earlier as I left my house in Taunton. Typical! Richard Hill and I were once again planning on tackling the Long courses (3hr score on Day 1 and a 19km linear course on Day 2) as part of the build-up to the Original Mountain Marathon (OMM) at the end of October. I guess the fog was at least making the Quantocks look more like the Brecon Beacons (the venue for this year’s OMM), although we were still missing the mountains… 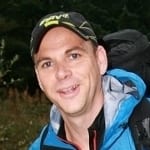 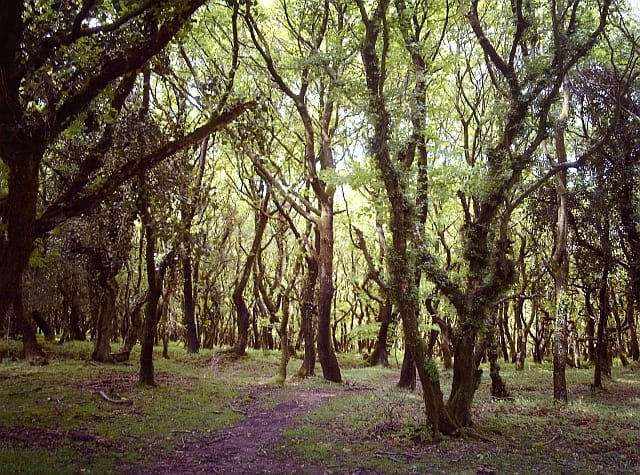 There were 21 controls marked on the 1:15,000 map: 7 with a value of 10 points, 7 worth 20 points, 6 worth 30 points and 1worth 40 points. Only controls of equal or greater value than the one you had previously visited would score, so for example as soon as you visited a 20-point control then any 10-point controls would no longer score. A simple enough concept, but it gave us plenty to think about at the start as we turned the map over and formulated a plan for the next three hours. 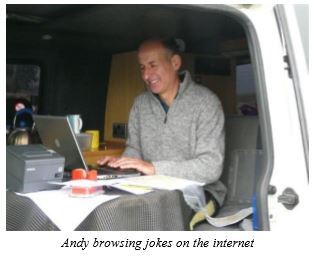 We decided to start with an anticlockwise circuit around the map picking up some of the 10-point controls, and identified what looked like a good point to switch to the 20-point controls. We set off from the start on a track run, quickly running up a sweat and dispensing with the waterproof jackets as despite that fog the temperature felt positively balmy. The first few controls were out on the open hillside, with some fast track runs in between. We then switched to the ’20pointers’ at a control in the steep wooded combe in the middle of the map, and started a second anti-clockwise circuit of higher-value controls before collecting the single 40-point control. Unusually for a score event this highvalue prize was actually the closest control to the start/finish, allowing competitors on the shorter courses to bag the 40 points as well.

We had plenty of time to spare as we picked our way through the ferns towards the finish flag. However, competitiveness suddenly got the better of Richie and he set off on a sprint finish when I was looking the other way! I stayed on his heels and we raised a few smiles as we went belting in to the finish control having a good banter. There was a bit of “history” to this – on Day 1 last year we also did the score event together, and the 4 seconds that separated us due to who dibbed first resulted in me getting two more penalty points than Richie! 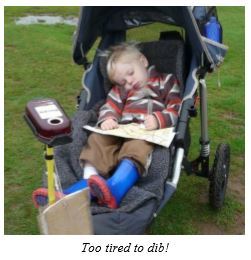 We spent the night camping out at Burrowhayes Farm – a lovely little campsite situated in the Horner Valley. Instead of a full ‘OMM dress rehearsal’ though we opted for a slightly bigger tent and a pub meal in Dunster – it could almost be described as ‘Glamping’!

We had a later start on Day 2 as I was on car park duty at the event centre The weather was mild and dry and for once the waterproofs stayed stashed in our packs the whole day, in stark contrast to the previous year. The Long course was billed as 18.7km with 870m of climb and 20 controls.

The first few controls Came thick and fast and it felt like a regular QOFL course, but then the legs got longer and route choice played a major part. Will it be quicker to do a track run round the hill from 7 to 8, or should we run up and over on a bearing? What’s the quickest route through the maze of woodland trails between 8 and 9? It’s these sort of challenges that make the Long-O such fun – plus it can help take the mind off tiring legs!

The competition area was relatively compact by Long-O standard (a singlesided A4 map at 1:20,000), but took in some great scenery including the beautiful Horner Woods.

This is a popular area for walkers and family outings.

My favourite moment was a very steep (verging on suicidal!) descent down a steep wooded valley from control 17 onto one of the main woodland paths. The family out for a Sunday morning walk looked quite bemused at the sight of two Lycra-clad men appearing from such an unexpected direction! And the low point was being asked by a couple in a passing car if we were taking part in a sponsored walk. Walk?! How dare you!

Unfortunately as were among the last finishers we had an additional duty to perform before we could head for home – namely trying our very best to polish off the soup and cake that was left over. Many thanks to Jeff for coming to our rescue and lending a helping hand (or rather mouth!). It’s always a highlight to sit around the event centre having a good chat and enjoying some delicious homemade food at the end of day 2 – many thanks as always to Judy and her team of helpers for all their hard work.

To summarise the event had quite a different feel to last year, particularly day 2. We spent a lot more time on tracks and a lot less time picking our way through bogs and ‘babies-heads’. The scenery was stunning and the courses offered a decent amount of route choice covering a nice variety of terrain.

Visitors from far and wide

I was also on car-park duty on Day 2. As well as many familiar faces from the local area I found myself meeting and greeting people from as far afield as the Midlands and Yorkshire, and even a few from another country (well, Wales!). Many of them had decided to make a weekend of it in the West Country, but the main draw was the Long-O (or perhaps the post Long-O soup and cake!).

It was also obvious from a brief conversation that for many of them this wasn’t their first experience of a QO Long-O event. What grater testimony to the hard work of those club members that put a lot of effort into this and many other events than the fact that people are willing to travel significant distances year after year to participate.

Many thanks to Andy and Rosie for all their hard work in staging yet another excellent Long-O weekend.