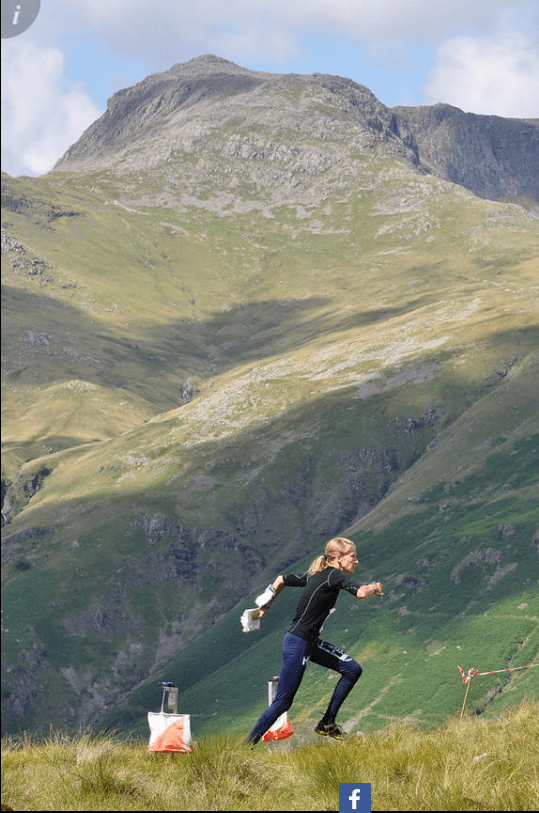 A series of abridged reports taken from the SINS newsletter 286, September 2014

*'s - indicates the number of days out of the five that the person ran on the relevant course. The other runners qualified for a full score

The rain showers overnight and the quagmire at our campsite were a prelude to a very wet day at Swindale, more aptly named Wet Sleddale by the Ordnance Survey.

The optimism created by a brief glimpse of brighter skies over Morecambe Bay was soon flushed away by the dark clouds which brushed low over Shap Fell. Amazingly the organiser had found some firm, level ground for parking just 2.6km from the start and finish. A solemn procession of orienteers tramped up the fell to the start. 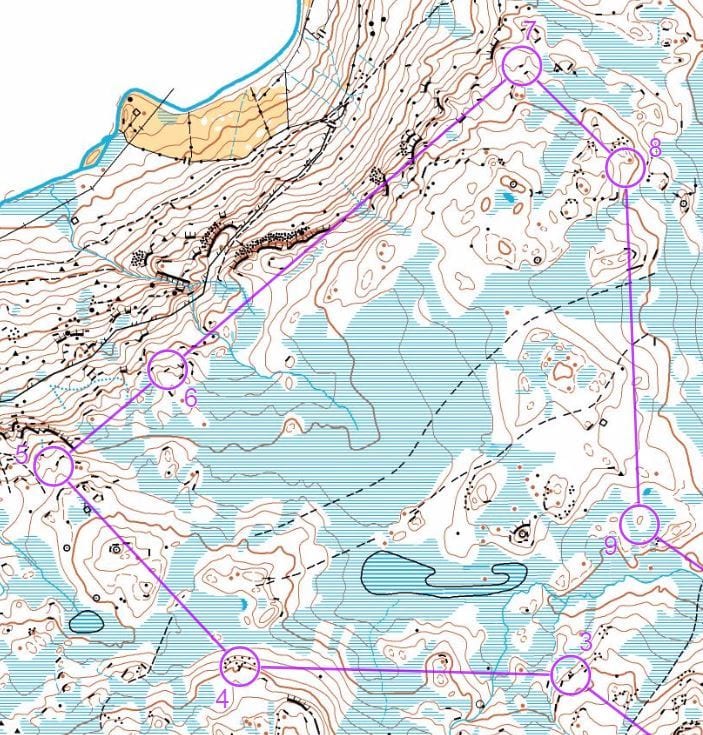 First sight of the map showed it was mostly covered by blue screen for marsh with the odd knoll emerging as a hilltop island. The start team pointed out the two bridges (one of which was missing) where we could safely cross the streams in spate.

Water and marsh, in many forms, seemed the best navigational aid, but running was very hard work. I made a couple of mistakes by losing contact with the map. I latched on to another runner heading purposefully down a ridge, thinking he knew where he was! He and I both came to stop facing a sea of marsh merging with the clouds, as the rain renewed its onslaught and wind whipped around.

I was saved by two breast like knolls peaking through the mire caught my roving eye and apparently matched two contour loops on my map a couple of hundred metres from where we should have been.

Just as I started, the weather closed in - horizontal rain, driven by a strong wind. From then on, like everyone else, I got wetter and wetter until I would not have been any wetter if I had fallen in one of the many streams. The biggest problem was the cold. It was very hard to generate any heat as running was slow or not at all– but that’s The Lakes for you! 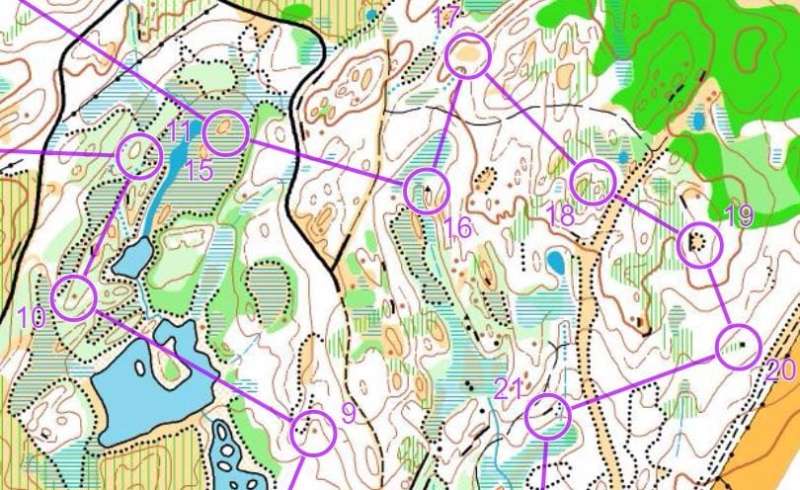 The glorious warm sunshine belied the messy fate awaiting us. The walk-in from the event centre was seductively pleasant: a quiet lane through a secluded hamlet alongside a merry little stream, into sun-dappled mature deciduous woodland surrounding a picturesque reservoir.

First impression on picking up the map was that it appeared to be covered in blue and green. Marshes and green screen abounded, interspersed with patches of white and some microscopic dribbles of rough open. I had been given dire warnings of the terrible man-eating areas of dark green, horrendous brashings and treacherous marshes. 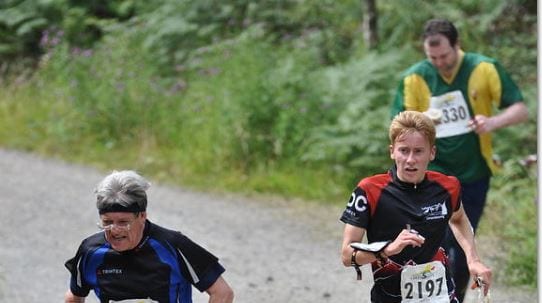 It was a tough choice – across the marsh, or skirt around it through the suspiciously impenetrable-looking light green? At least the marsh made for good visibility, and it had the bonus of a nicely-defined angular edge giving a good attack point into the first control.

A cluster of contours contained several re-entrants and a positive wealth of controls; not to mention a flock of bewildered-looking souls wandering vaguely around and dejectedly checking a control numbers. All in all, it could’ve been a lot worse but the unfamiliarity of orienteering in this kind of terrain made me very tentative. 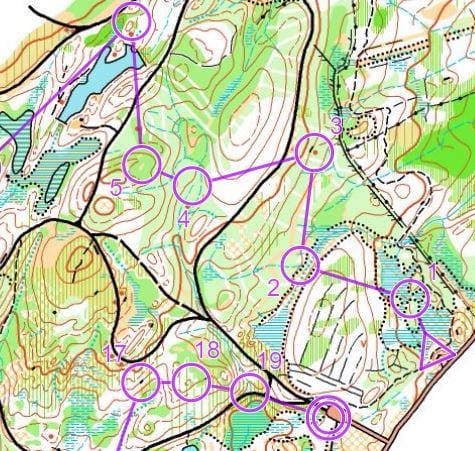 This was held in a challenging wooded and hilly area. The planner had carefully positioned the controls on my 5.8 Km M55L course such that virtually no advantage could be taken of the major paths that criss-crossed the area. The quite dense woodland around many controls required very careful attention to the contours in order to prevent loss of time. I was able to pick up the features leading into the controls nearly every time without faltering.

A number of areas very clearly marked on the map as ‘windblown’ impeded progress and favoured the runner able to leap over tree trunks. Overall it was a cracking day – great course, short walk to the start, car park with a view, adjacent assembly area and good weather.

Ulverston is a town full of references to Stan Laurel, and of children armed with water pistols. The town itself was fairly typical urban terrain with an intricate town centre and more generic estates to the south. Maybe the courses would have been more interesting if they used the town centre a bit more, but it still made for a nice run. All courses finished with a rather vicious climb up Hoad Hill, giving stunning views across Morecambe Bay. Having run 11km by the end, the oversized pie for dinner was hard earned. 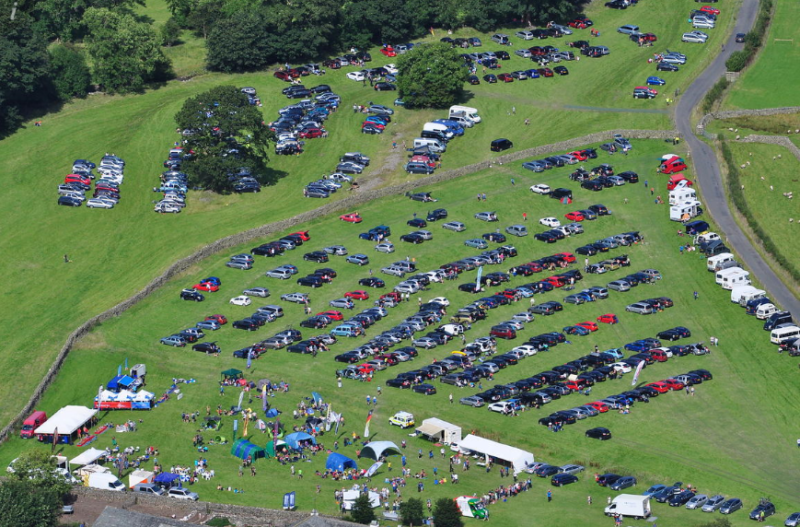 The weather made Day 4 one of those days when you feel inspired and privileged to be in The Lakes. Driving from Keswick gave wonderful views of the Helvellyn range, Helm Crag and Grasmere and the views in Great Langdale from Assembly were breathtakingly spectacular. Most courses that day were on Pike O’Blisco involving a really long slog up from the Langdale valley. I was more fortunate in that some of the shorter courses were planned around Blea Tarn, a lovely high valley that leads into Little Langdale. There was a steep climb to get there but once at the top we had a view over the whole area used for the courses and had the fun of trying to work out where the first controls were and why people had chosen the routes they had. 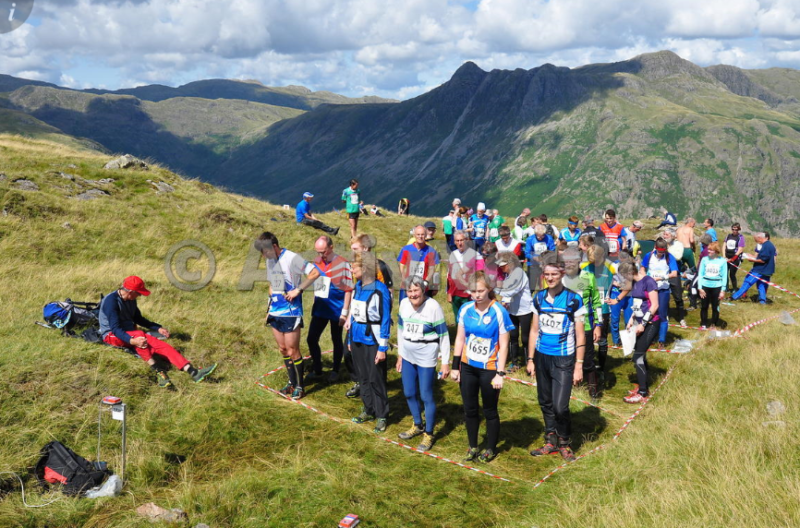 This area was in a stunning location high on Wrynose Fell, close to the summit of Pike O’Blisco. The open terrain made for excellent running, though with a lot of complex rock and contour features navigation was not straightforward. The high fells turned out to be warm and sunny. Driving through Langdale on our way the hills looked stunning and the crags were drenched in morning sun. 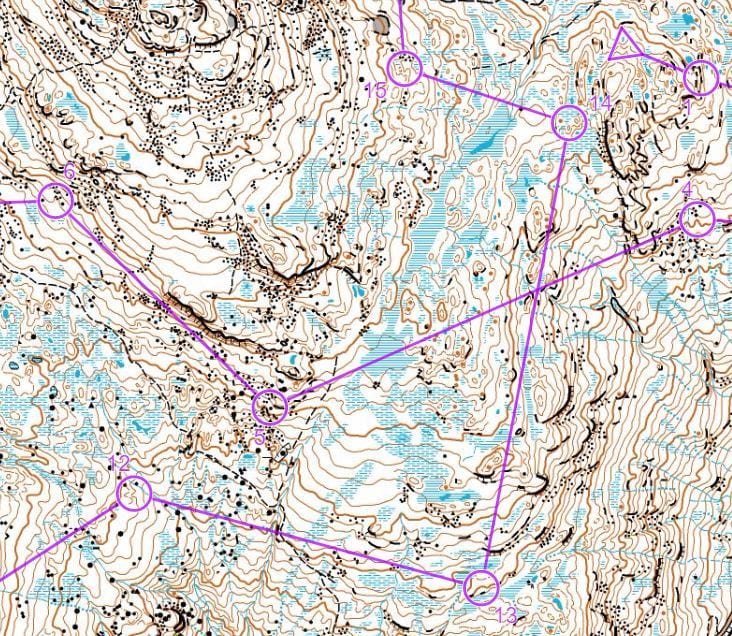 From the event car park just past the National Trust campsite, the high fell area necessitated a long walk to the red, blue and green starts: 2km and 400m of ascent, firstly up the narrow road towards Blea Tarn and then following a footpath alongside a gill up onto the open fell. This made for a great warm-up and offered excellent opportunities to admire the surrounding fells, but made it very difficult to return to the car and retrieve any forgotten items of kit...like my compass.

I would just have to try and do the best I could relying on terrain features, including heavily-featured and contoured hillside. Many of the control sites were boulders or knolls, but as there were so many of these it was hard to maintain accuracy without having a precise direction of travel to rely on. It was quite difficult to relocate in this area as the predominant features were indistinct marsh, small knolls and outcrops. 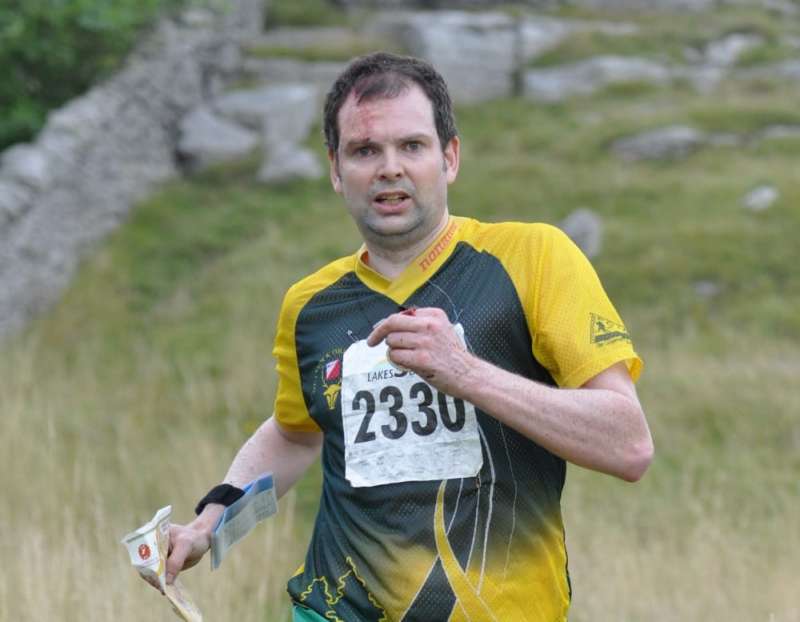 Jeff P at Hampsfell, during thunder and lightning
Credit: ActiveNorth

The area sits above Grange-over-Sands at the southmost extent of the Lake district. Both woods and fell are home to large expanses of limestone pavement, some living up to their name by appearing flat with sharp curb-like edges and others mossed and sculpturally worn, broken in places to looser rock.

For the less fortunate the rain swept across the hilltop as they navigated the slopes, making glasses mist up, maps flop and stick to themselves and the limestone become wet and slippery. The adverse weather was short-lived and by the time I was on the hill, it was fast, (relatively) dry underfoot and in places advantageously tracked up.

The open landscape revealed grey layers mixed with summer grass, bracken, and some scattered windformed trees. The wood however, was much more dense and complex. It seemed many detours were taken in the wooded area, some because it was harder to tell what was mapped as limestone pavement and what was rocky ground, and others mistook paths and crags for similar features. 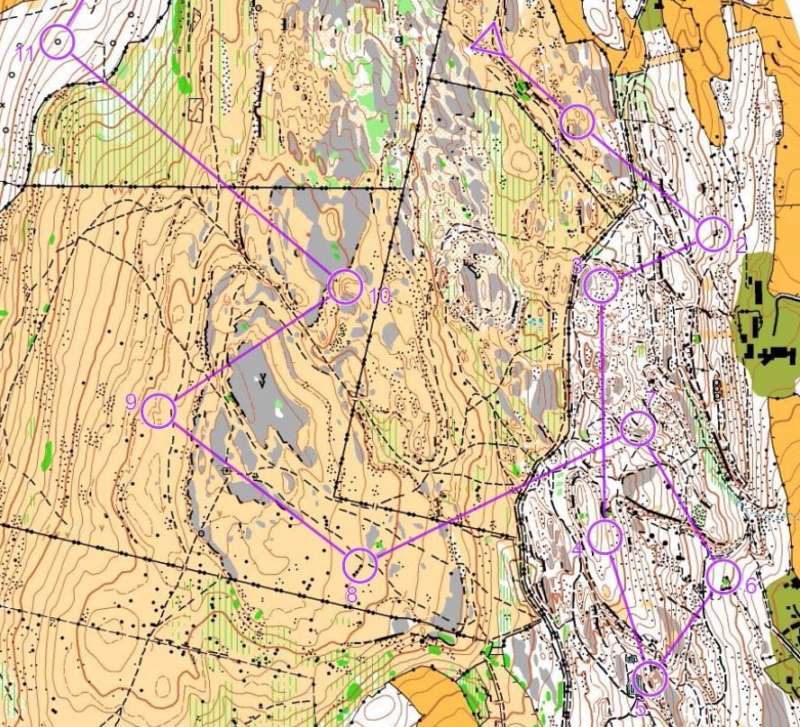 The woods seemed to hold a damp otherworldly atmosphere, full of mossy boulders and lichen covered branches, with controls tucked behind small crags or slight re-entrants. Reading a feature crowded map in low light and loose footing made for a marked change in the race pace. Opting to take paths in some cases and making sure map contact was carefully kept seemed like a sensible option.

After the wood was another blast on the hill top, passing by an unusual cube-like tower from which some hill walkers bemusedly followed my progress. The final part of my run was down through a rough, undergrowth heavy hillside (that I could have avoided, if I'd read my map) and into a small and less interesting piece of woodland to finish.

Overall, whilst Hampsfell and Eggerslack didn't have the natural drama of Pike O Blisco or the neat speed and accuracy of Simpson Ground, it combined two very distinct, but related terrains in an event that had all the twists and changes of a great race.

Drama was added to the wait for the start with an unscheduled roll of thunder. Too short a time was spent in the delightful open limestone terrain but the event saw a switch of terrain, pace and tactics, with an interesting mix of woodland and open country.