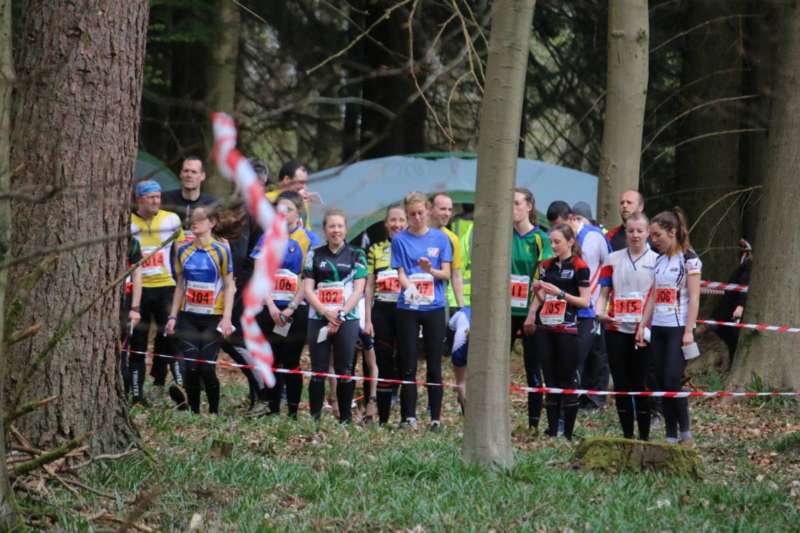 The start line for the M40+ relay
Credit: Wendy Carlyle

Half a dozen club members got to rub shoulders with the crème de la crème at this major event. Jeff Pakes did a write up focussing on the relays on the Sunday...

The prestigious British Orienteering Championships (BOC) and its even more prestigious entry fee of £22, rising to £30 for later entries, drew a smattering of QO entrants for the individual day on the Saturday. Then, after some lung-bustingly long courses some of these hardy souls hung around for the relays the next day.

In running order, we had Richard Sansbury and the two Brians, Fletcher and Pearson in the A team (Quid Pro QO) and in the B team (Bula QO!) we had myself, Adele Appleby and Graham Pearson. For practical reasons, I had entered two M40 teams at an early stage. Women could run in mens' teams but not vice versa and the M40 course would not be overlong for any older or less consistent runners. Adele and Graham were the last to join up and were game enough to “run up” from their normal Green and complete a Blue calibre course of 6km, with 175m climb. 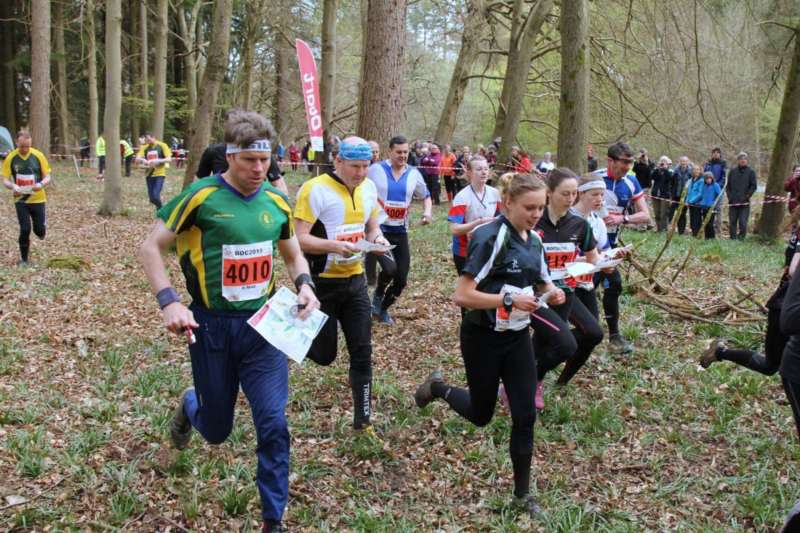 The off! But a cautious start from both Richard S and Jeff P (left)
Credit: Wendy Carlyle 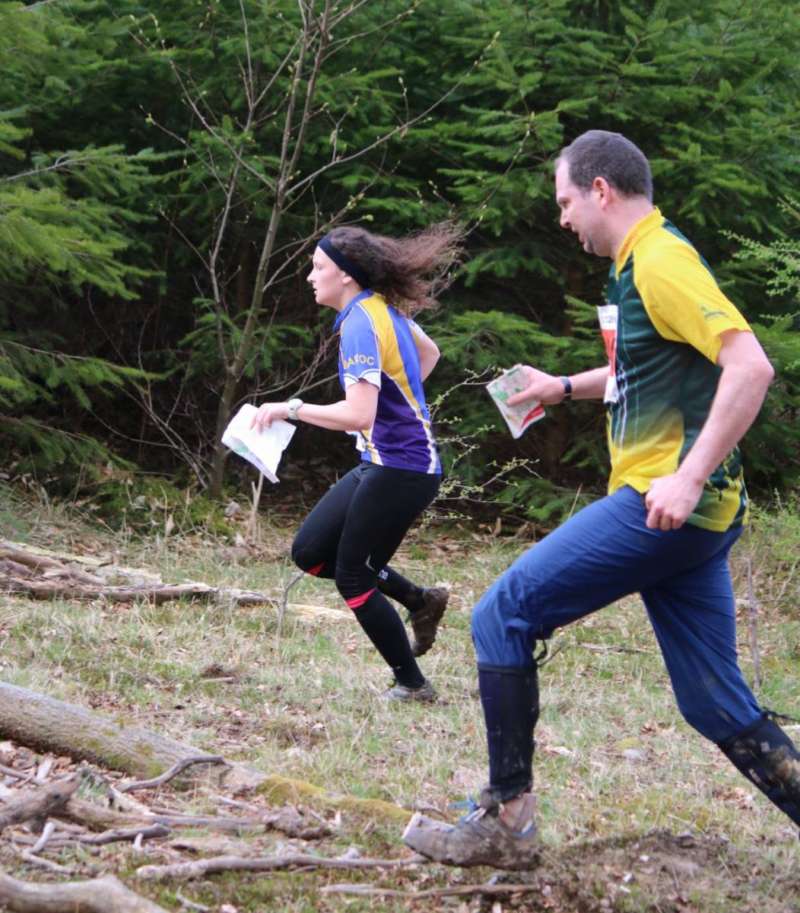 The teams entered the fray having narrowly averted a major defeat before the contest had even started. Somewhat ambiguous final details on the BOC website led me to believe, as organiser, that our race “bibs” (the runner numbers) could be picked up anytime from Saturday morning, including race day. Mindful of the rather harsh “no bib, no race” rule, veteran of previous BOC relays Brian Pearson saved the day by picking up the bibs not long before enquiries closed on Saturday. That meant the only red face I was to suffer was on the course itself. 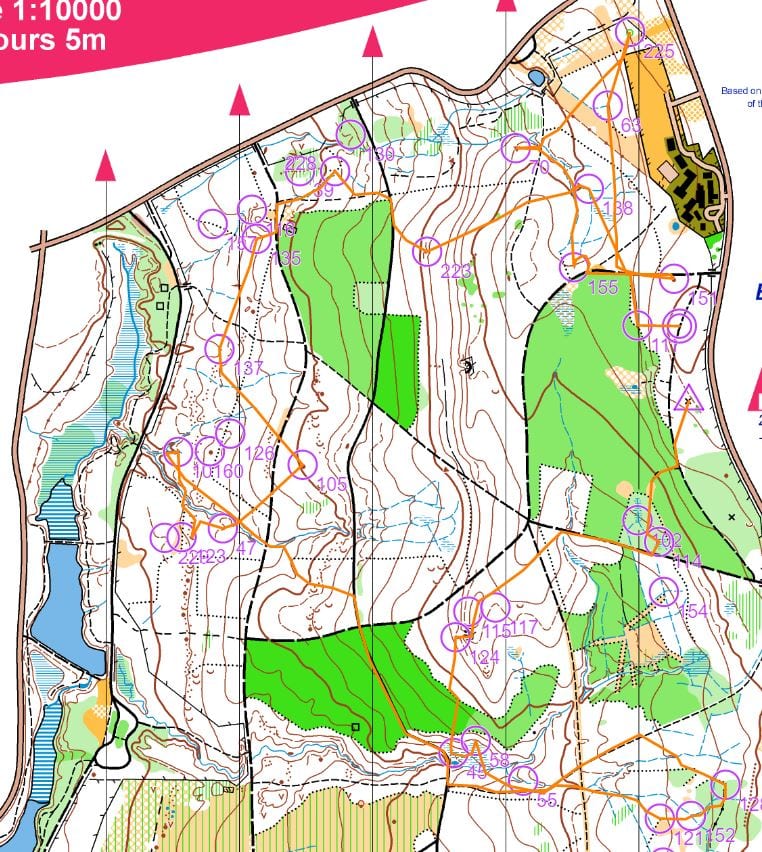 Richard justified his selection as first A team runner out with a tremendous 46 minute run, only 9 minutes behind the M40 lap one leader, elite runner Nick Barrable. One thing that might not be mentioned in the CompassSport mag Barrable edits is his nearflooring by a springy branch as he hurtled back towards control one, having overshot. A tall chap in a green and yellow jersey was seen clumsily pulling back then releasing the branch, as he fought his way away from that control. 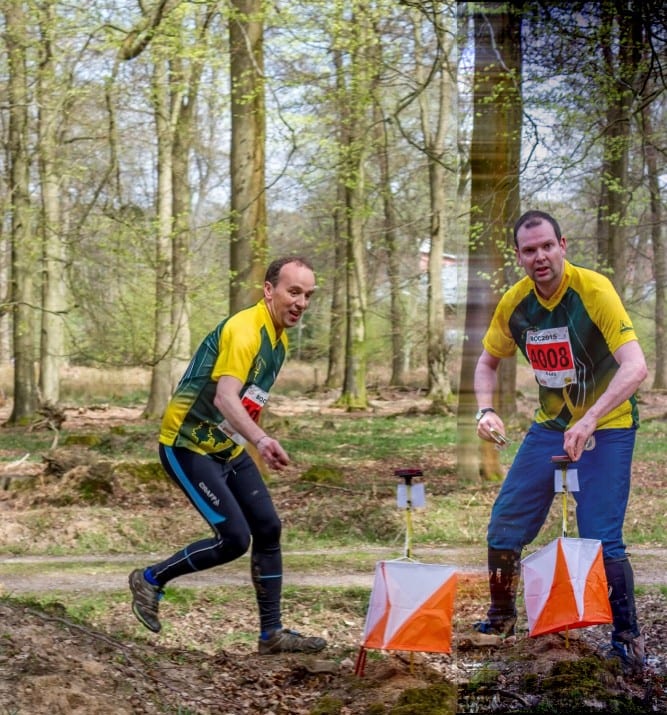 Who's looking freshest 3/4 of the way round?
Credit: Mark Lockett 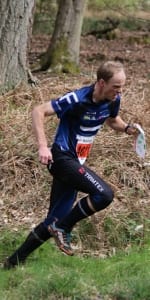 Besides beating a globe-trotting trophy bagger to control one, I also had a very good run, taking 55 minutes. In the last half of the course I was engaged in a titanic struggle with a young woman from a Scottish club, neither of us able to shake off the other, even on the finishing straight. The M40 teams were running the same race as the Women’s Premier category. I was glad to hand over to Adele Appleby in good time. The later runners could basically take as long as they wanted and not have to worry about making anyone wait around because there would be a mass start for leg 3 runners before later leg 2 runners returned.

The pace was furious and because I didn’t make any real mistakes, I didn’t get a breather. Fitness told. Looking at some of the post-race photographs online (Mark Lockett’s on flickr), and particularly the “photographer control” three quarters of the way round, I can only marvel at how fresh some of the better runners (e.g. Richard) still looked compared to me, with my breathless red face and thousand yard stare! 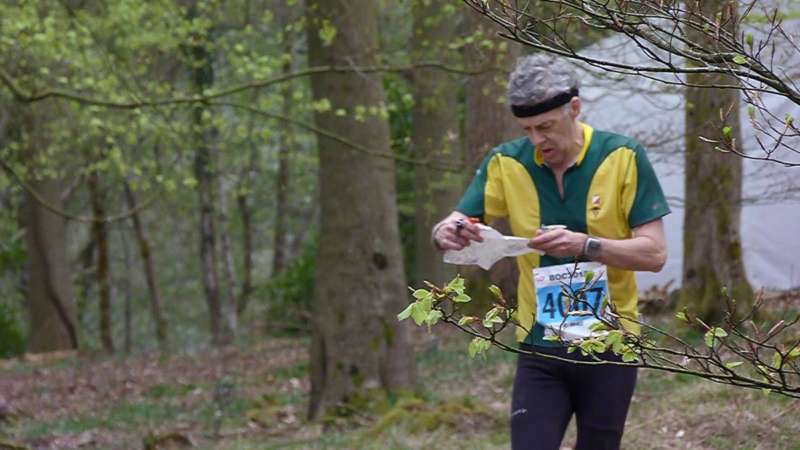 Brian P, who saved the day by picking up the bibs
Credit: Jim Pearson

Overall, the A team were competitive and did themselves justice, finishing 6th out of 13 teams, with Brian Fletcher adding another strong run on 50 minutes. For the B team, it was more a chance to have another day out in some excellent orienteering terrain without taking it all too seriously. And for all, the chance to socialise by the club banner by the finishing straight, marvel at the sheer diversity of runners on view (click for Wendy Carlyle's Flikr album) and shout encouragement. Not least Brian Fletcher’s battle cry to Ruth Holmes, ex QO member and daughter of Dave, as she thundered down the homeward straight on lap 3 to achieve glory for Southern Navigators in the Women’s Premier category. 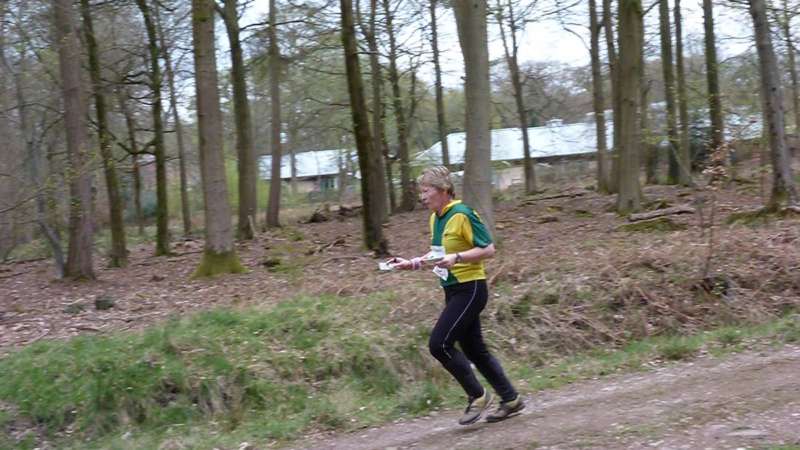 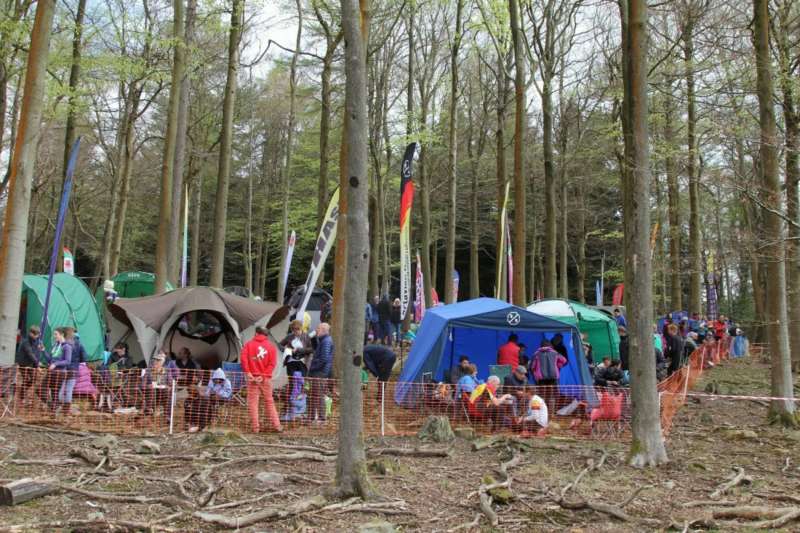 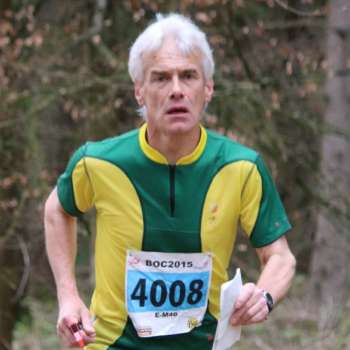