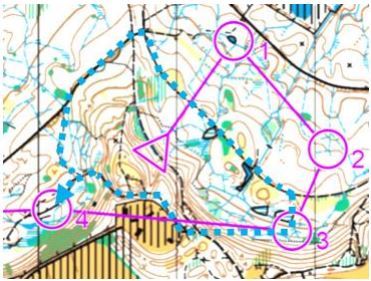 Over Or Around? On 3 to 4
Credit: QO Routegadget

A classic orienteering dilemma: the next control is on the other side of a hill. I could go over the hill but that takes effort, or I could go round it but that is a longer distance. Which is best?

Here is an example from our Galoppen at Neroche in 2014.

The Blue course is shown, although the same leg was on the brown course as well. From 3 to 4 there is a direct option to scramble 30m up a very steep slope then follow a path straight to the control, or take an indirect route, avoid the climb but the extra distance is about 500m.

A rough rule of thumb is that 10m climb is worth about 100m on the flat. This depends how fit you are of course, and a steep climb may take more out of you at the end of a course than early on. However it's a neat and simple rule.

On this basis I'd suggest it would be better to go for the scramble up the bank. However there isn't much in it, so best just to make a quick decision and then get on with it!