Or deliberately going off course

Sometimes it is best not to head straight for the control! Saving seconds by taking the most direct route is no good if you miss the control and spend several minutes hunting for it. A technique to reduce the risk of missing is to "aim off". 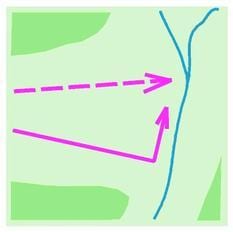 Here is an example from the blue course at Blackborough in earlier 2004. You could try to go from 15 to 16 directly, but over a distance of 300 metres it would be easy to drift one way or the other, and miss the target.

A smarter option would be to deliberately aim off to the east to hit the small path, then follow this to near the control. With a sure-fire way of landing on the control you can concentrate on the running and be quicker!