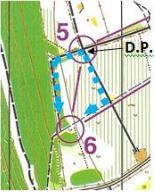 The whole point of orienteering is to make decisions about where you go, otherwise it's just a cross country run! "Decision points" are places at which a choice must be made.

At the basic level this will probably be a path junction, where the decision is left, right or straight on. Sometimes there is only one sensible way to go, but other times there are several possibilities. It's no good flying past the decision point and then realise later that another way was better.

Here are two examples from our Blackborough Galoppen back in 2008.

In the first example control 5 is on a junction. To go to 6 there are two path options: head south on the big track or head west on the smaller track. It's also possible to go diagonally across, but personally I wouldn't choose that because of the undergrowth. Control 5 is a classic decision point. Rather than charge off straight away, have a quick think about the options and decide which way is best. 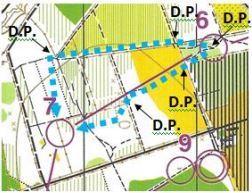 Can you see any other possible routes and decision points?