Get off the path 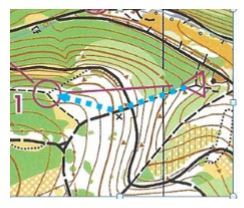 Corner cutting is a basic skill aimed at anyone running orange or higher. Your average recreational walker or runner will stick to tracks and paths. Orienteers are not average though!

A good course planner will try and make it so that the optimum route is not along paths and reward those who are adventurous enough to get off the tracks.

Here are two extracts from an Orange course at Ramscombe in 2010.

Take the first example. I could go to control 1 around the paths. Up the hill, across the path crossing, continue up to the next path to the right, and then downhill onto the control. This is the easiest option for a novice, and least likely to go wrong. 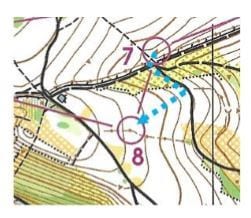 However, I have marked on a dotted line to show a more direct route. By cutting the corner I shave a short distance off the journey but more significantly I save myself some unnecessary climb.

In the second example, 7 to 8, I could go round the paths and then follow the earthbank to the control. Simple, but look how much I can save by following the dotted line. I do not want to cross the area of young trees - this is likely to be tough going, but I can easily cut through the forest.
It's also more fun away from the path!

There's also another good route option between 7 and 8, can you see it?