How the results and league tables are calculated. A simple explanation, followed by a more detailed explanation and a justification for why the club chose the scoring method it uses.

How league points are calculated

The system that we use is called the Stats method. This system is basically used to calculate the BOF national rankings, and has been successfully employed in multi-day leagues such as the Scottish 6 Days. The proposal is to start using this system in the autumn, and QO members are invited to express their opinions.

On each course the average time for the top 90% of the qualifying competitors is worth 1000 points. Each score is based on 100pts for each standard deviation quicker or slower than the average time. 90% is used to reduce the effect of outliers on the calculations, but all will receive a score.

On the courses with 10 or less qualifying runners the standard deviation is 20% of the mean (Small Course formula), and courses with 11 to 19 runners have a weighted mean of both formulae.

Points are calculated as follows:

• Multiplying by SP , the standard deviation of the runners’ points, converts this to points

• This difference is added to MP , the average points for the runners in the race and this gives the runner's points RP

• a modified formula is used for small courses:- Substitute ( 0.2 x MT) for ST

• If there are between 11 and 19 runners, a weighted mean of the scores given by the above two formulae is used, e.g. with 17 runners, the points are

If you have any comments or questions, please contact me using the details on the contacts page. 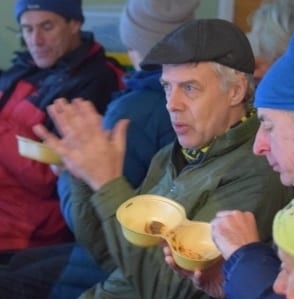 Justification for the scoring method

For quite a few years now we have had a forest league, and it has provided a good competition for local orienteers from ours and neighbouring clubs. An excellent article by David Rosen in CompassSport magazine comparing multi-day scoring systems provided the inspiration to look at our league in more detail. The club goes to great effort to ensure the maps are accurate, the control points are fair, and the timing is correct. All of those aspects are intended to provide a valid result so using the best scoring system makes sense, especially when a spreadsheet can do a lot of the work.

To my mind the aim of the league should be to provide a valid result for consistent performances over a whole season. There have been times however when our scoring system based on 1000 points for the winner has caused a negative effect on the outcome for the rest of the field, and also not adequately rewarded outstanding performances.

Various examples of this can be seen in the final tables when an occasional appearance made by an elite runner on the blue course has resulted in lower scores for regular runners even though they have orienteered to their usual abilities. This has often resulted in scores being dropped by chance.

Elite runners should score more points for winning by 10 minutes than for winning by 10 seconds as this is obviously a better achievement. Furthermore if a 1 minute time difference on the day is worth a consistent number of points then this is fairer than the current system that compresses the scores further down the table.