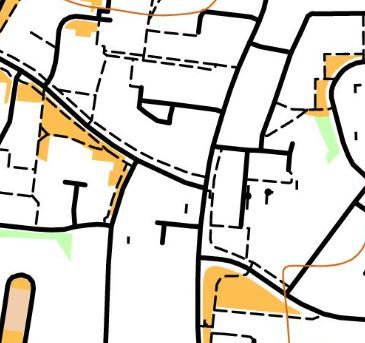 We use these maps when there is no bespoke OCAD map for an area- so every where except certain parts of Taunton. They are produced from open source mapping data. This article explains the difference in the specification of the two types of map used. 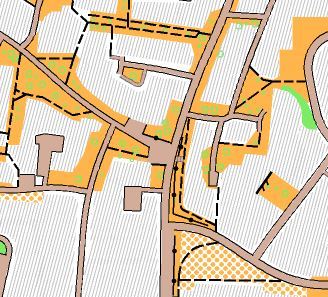 The two map excerpts pictured show the same part of Pyrland, Taunton. One is mapped in OCAD and the other is in Open Orienteering Maps ("O-Maps").

Traditionally, maps have been produced in OCAD, to a high specification, displaying individual trees, accurate road widths and on some maps individual buildings and pavements are shown.

O-Maps obtains its data on a nightly feed from Open Street Maps ("Street Maps"). Street Maps is a global open-source mapping project with a whole variety of contributors.

Map amendments are best made in Street Maps. But it varies from very easy to almost impossible to show certain features on the O-Map, depending what they are! Although O-Maps tend to be more basic than OCAD maps as a consequence, with sensitive updating they can be nearly as effective.

Rough open and grass are shown in their standard colours of magnolia and orange respectively.

Everything else is shown in white. As this tends to be private property, 'white' is out of bounds. Private grass and parking bays etc will be shown in white.

O-Maps often show walls that are of no consequence to navigation, lending a clutter to the map. They should not be confused with footpaths. This applies particularly in poor light or at speed.

What tends to be omitted

Although fences etc are omitted, they will be part of the white areas on the map which are out of bounds and hence not crossable.

Gateways are usually shown by either a path or a crossing point symbol.