Including commentary from the event officials and photos 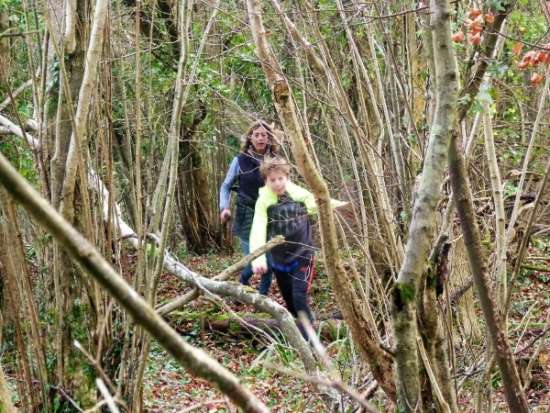 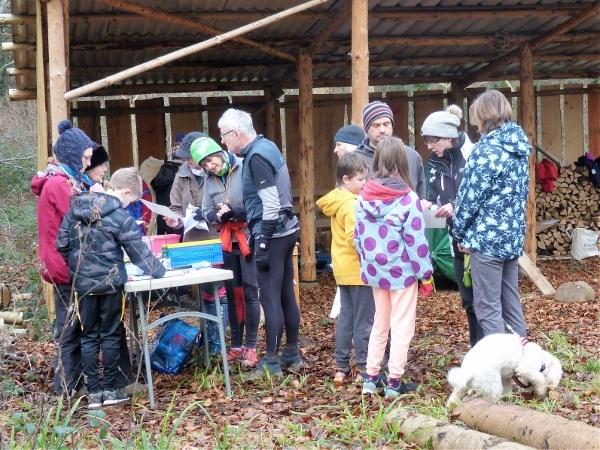 At registration - Vikki showing newcomers what to do
Credit: Jim P

As we all know QO is a small club so helping at events seems to come round quite frequently; this does have the added benefit that we all have plenty of practise at the various jobs, with most people becoming “specialists” in certain areas! We had more than 30 helpers in all!

More people attended QOFL 4 than we had anticipated, so most helpers were under more pressure than usual, with the parking in particular being very tight. 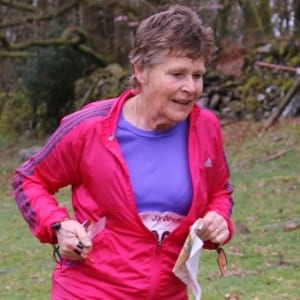 The organiser, Judy (at JK '15, the Lakes)
Credit: Wendy Carlyle

It was good to see the younger members pulling their weight, with Emily Pye helping people clear and check their dibbers at the start, Andrew Page and, on a later shift, Adam and Erin Wood dealing with download very efficiently, Hamish Braine-Clarke manning the finish (after a great run on the Yellow course) and Chloe and Annabel Carter helping with the road crossing. As we were short of assistance we had to call on our new members who generously helped too.

I should like to thank Richard Sansbury who assisted in various and diverse ways throughout the day. 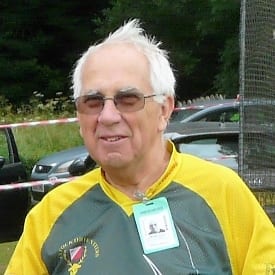 It is some time since I controlled an event and I was grateful for help in checking the controls in a physical area. Much work had been done behind the scenes in obtaining permissions, re-mapping by Bill Vigar, and detailed planning in an area that had been known as Orchard Portman previously. Robert was receptive to suggestions and provided courses that were fair, yet challenging with plenty of aids for younger classes.

Given the other events in the South West this weekend we were grateful to see so many visitors from other clubs and newcomers from our own area. 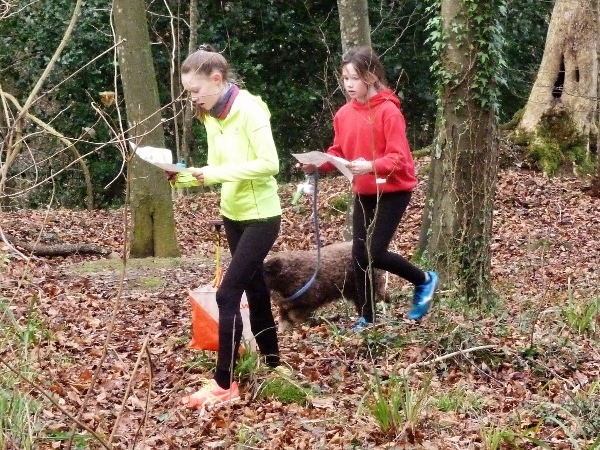 Robert and Judy have commented on the assistance given by Richard Sansbury throughout the event. We are indeed fortunate to have him as one of our members.

We have amended the results to reflect the displaced control [Robert explains further below] and the non-competitive status (shown as "n/c") of some of the newcomers, but if you feel you have been unfairly treated please contact me on chair@quantockorienteers.co.uk and I will look again.

Congratulations to Robert on planning challenging courses and to Judy and her team of helpers for a pleasant, social experience! 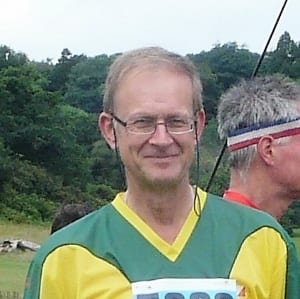 I felt quite honoured to be allowed the opportunity to plan the club’s first QOFL at this location, the centre portion had previously been used for smaller informal events, but with the additions to both the western and eastern sides, it was now deemed suitable for a QOFL. As always it was a pleasure to be working with both the detail and clarity of Bill Vigar’s map, which we both updated as we went along, my input being via the utilisation of a hand held GPS and email messages. Having said that we did not quite achieve as much as we would have liked, due to the cold / 'flu like virus taking its toll. 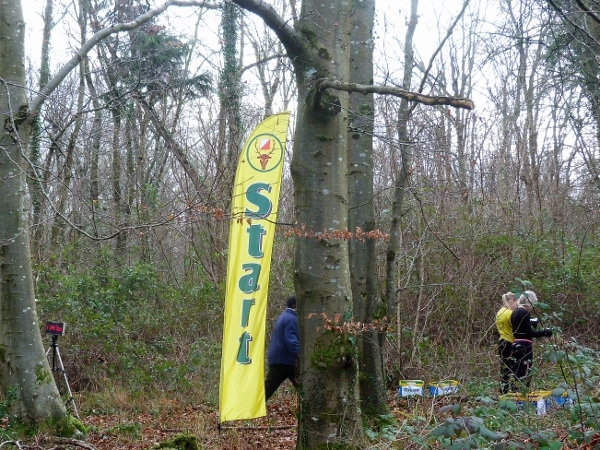 Sarah and Evelyn at the Start

From the start of planning, it became apparent that the venue was going to be restricted by the vegetation and the fences in the middle, with just two crossing points. The area to the east would be most suitable for the junior courses and registration and the west providing some good TD5 territory for the seniors [TD5 = Technical Difficulty level 5; the courses with this, the highest level of difficulty are the courses from Short Green upwards].

It was quite difficult to fit the Yellow course into the eastern portion, which resulted in it being a little on the short size and extensive use having to be made of the other line features such as earth banks and fences, but as on the day there were no mispunches, it obviously proved to be no problem in the end. 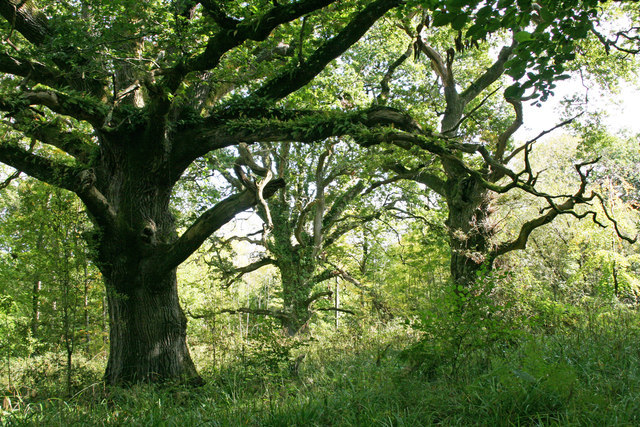 Unfortunately at some point between the control checking and the courses being opened, somebody displaced control 134 about 150m to the NW, which was surprising to say the least, as it was well away from the path network, so many thanks to Gavin Clegg for running straight back to the start to inform me, we did manage to get it reinstated by 11:50 [see map excerpt pictured, from Routegadget; click on the links to see the other course maps]. It had affected several runners on both the Blue and Short Green courses, so it was decided to void the legs either side of the control for everybody on these two courses, which was a bit of a shame, particularly on the Blue as it involved two long legs.

Gavin ran back to assembly to report the stray control 134 (shown as no. 4 on the Blue course)
Credit: Routegadget 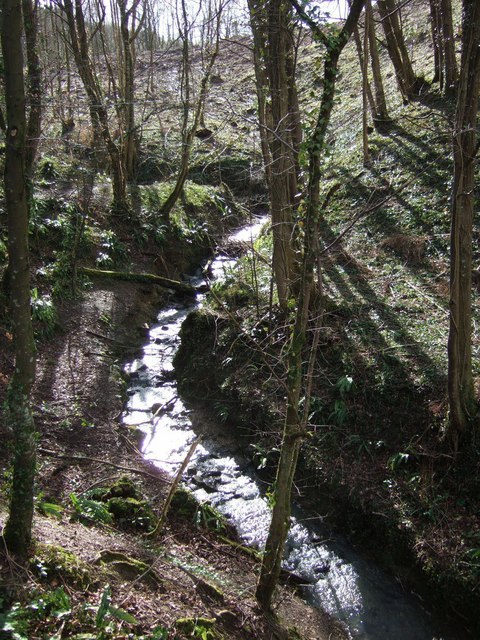 I found that returning competitors were very understanding, with some then going on to describe, in a good humoured nature, the mistakes they had made on the day, but having enjoyed the challenge of the TD5. We only had the one unfortunate incident when an individual from another club, somewhat lacking in certain social skills, attempted to blame the map for his navigational performance, but forgot that it was the same for all competitors! 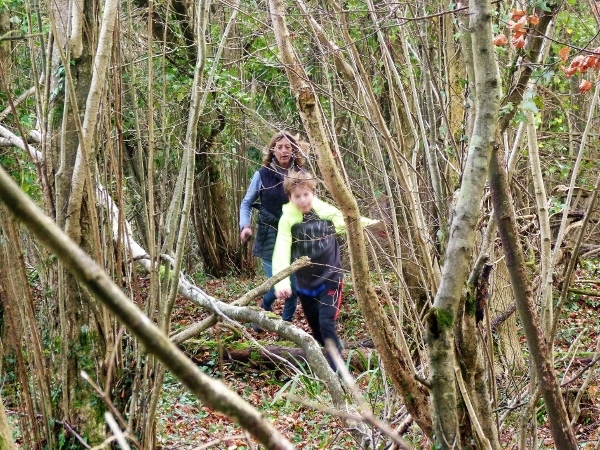 Through the undergrowth
Credit: Jim Pearson

In retrospect, I probably made the senior courses a little on the long side due to overestimating the rate of progress across the terrain, but fortunately the weather was on our side. Plus it was relatively dry under foot for most of it, so I was left with the impression that most people didn’t mind in the end. Having spent many days walking around the woods on my own not seeing another soul and wondering which animal had just made that last call, I find it such a contrast on the day to find the area full of people coming from all directions displaying a variety of expressions!

So many thanks to Roger and Judy Craddock for setting up the registration area, plus ensuring as always, that everything ran smoothly. Thanks also go to Richard Sansbury for stepping in at short notice to help us on the day and particularly for sorting out the SI system in relation to the missing control. Finally many thanks go to Bill for mapping the area, providing updates as we went along, plus providing gentle, sound common sense advice as the planning progressed.

Team 1 put on this event, aided by members of other teams who kindly made themselves available. Sorry if we have left your name out and please get in touch if we have.

The venue may have been Headless Hill but QO's Steve Robertson obviously had his head very much screwed on during a storming run in the Forest of Dean on Sunday. Steve finished just outside the top quarter of runners on Blue and took some notable scalps in the process. The Forest of Dean is always a big draw for runners from all over the West, the near South and the Midlands and nearly 300 went. With such competition, we were very glad to register a three figure attendance at our own little event too.

Parking will be very tight. The spaces being used are not suitable for vehicles bigger than minibuses.

Explanation of colour-coded courses (thanks to Berkshire OC)

Other users of the area

Please will runners be aware that this area has a large pond popular with anglers.

Have you renewed your membership?

You need to do so to be sure of claiming the discounts below.

Mixed woodland with ancient trees to the south of the area.

Dogs must be kept on leads or under close control. Please do not pass too close to anglers using the pond. Please pick up after your dogs, particularly as children use the site regularly.

The start and finish are both a two minute walk from registration and download. See diagram in the photo gallery section (this can be printed separately).

All within about 15 minutes' drive

Team 1 are putting on this event, aided by members of other teams who have kindly made themselves available. Link: Helpers' details (v2, Fri 12th)