Full set of reports below

Well, the mulled wine took the edge off the freezing cold rain, which at least washed off all that mud! Well done all runners for braving the conditions and especially the officials and helpers for manning the event so cheerfully. 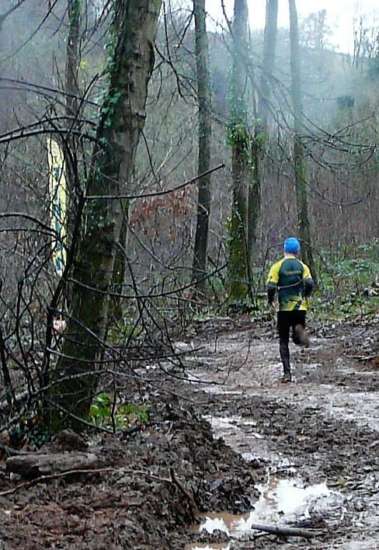 Richard S showing a clean(?) pair of heels in the mud

Pete Shirvington was our top placed runner on New Year's Day but only started in the sport 16 months ago. Under the circumstances, I just had to ask for a report from Pete and he duly obliged, below- thanks Pete, and well done on your run. Jeff Pakes 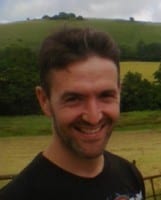 More mud = more fun, this was the sales pitch to persuade my two boys to join me at the QOFL4. With no buyers I set off on my own.

It rained throughout the event, keeping the muddy slopes nice and slippery and allowing me to maintain a nice temperature throughout the run. Tough conditions for the helpers, though keeping warm and everything dry, well done everyone. I thoroughly enjoyed sliding down the steep muddy descents on my side underneath a canopy of brambles. This was until I realised the mess wallowing in the mud had made to my map & compass! En route to control 9 the muddy map became almost illegible and I frantically search for a mud free area of my clothing to clean things up. Luckily I was able to flip over to 'Blue Part 2' after control 10 providing me with a nice clean map again :)

I started orienteering with QO in September 2015, keen to find a sport I could share with my family. My first event was the 14.2km medium course at the Long O at Malmsmead Hill on Exmoor. After running for 4.5 hours and being passed by other competitors walking, I realised that I had a lot to learn about orienteering! After this I stuck to mostly blue & brown courses, enjoying the longer race and normally coming in closer to last place. I am really pleased with my 5th place result at the Kingscliff QOFL and it has given me some confidence that I am starting to get it right. For any other newcomers I recommend getting involved with the team relays over the summer as it’s a great opportunity to learn from the more experienced club members.

Looks like Pete "nailed" most of those controls!
Credit: Routegadget

Since Kingscliff is essentially a steep sided valley with patches of the ever encroaching bramble it represents an interesting planning challenge. Robert Green provided the initial courses incorporating the good idea of two finishes to enable the shorter courses (white, yellow and orange) to use the northern path network with limited overlap with the longer courses. The main objective on all courses was to avoid the ‘green’ areas as much as possible and from the positive comments at the finish this seems to have been achieved.

Thanks to Jim, Andy and Rosie for Controlling and despite Jim’s concern that the combination of the terrain, weather on-the-day and course lengths may have resulted in longer times the winning times on the longer courses ranged between 37 and 49 minutes.

Thanks again to the Craddocks for Organising and providing the New Year surprise -- mulled wine and mince tarts-- plus the many helpers who braved the mud and rain. 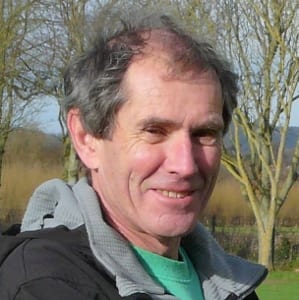 The courses I first saw were after Steve had taken over the planning (from being controller) and had made some changes. It was pleasing to see him use the best (nicest and most intricate) part of the area for the technical courses - the Blue visiting it twice - and skirting round the 'not so nice' parts.

The only changes I had to make were to the map where he had used features that were not mapped accurately. I was a little concerned that some of the courses were close to their recommended maximum length and that, if conditions were similar to those at the JOG/QOAD event in November, they may be a little too long. Unfortunately, this proved to be the case as the weeks of dry weather leading up to the event gave way to some 'damp' weather on the day.

Many thanks to Steve for planning good courses, and especially to Rosie and Andy for acting as 'on-the-day' controllers in my absence.

Thanks to the volunteers on the day at this event, listed below.

The weather was disappointing considering the fine days before and after. Steady rain throughout the event meant the atmosphere inside the SI tent and the registration/mulled wine tent became very ‘cosy’. I suppose the courses would have been even more slippery on the ice the following day!

Although the numbers were low, we were very grateful for the positive attitude of the participants - despite the mud and the rain. The recent forestry workings had finished and the rides had been restored. Parking was well managed using a separate helpers' car park.

Courses were planned initially by Robert Green on a map recently converted to OCAD by Simon Beck. Steve Robertson took over as Planner and incorporated his amendments as the initial Controller! Jim Mallinson became Controller, but Rosie Wych and Andy Rimes checked controls on the day as Jim was not available.

Volunteers on the day

Take the route round the west of North Petherton off the A38 and follow the O signs from Cliff Road.

Wooded valley, with stream to be crossed by longer courses