See below for League tables after 2 events 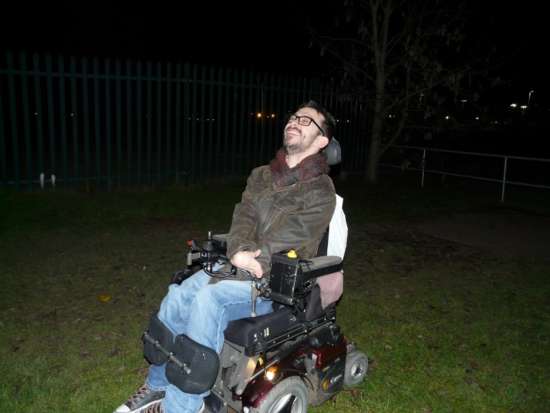 Nath enjoying it at Maprun again 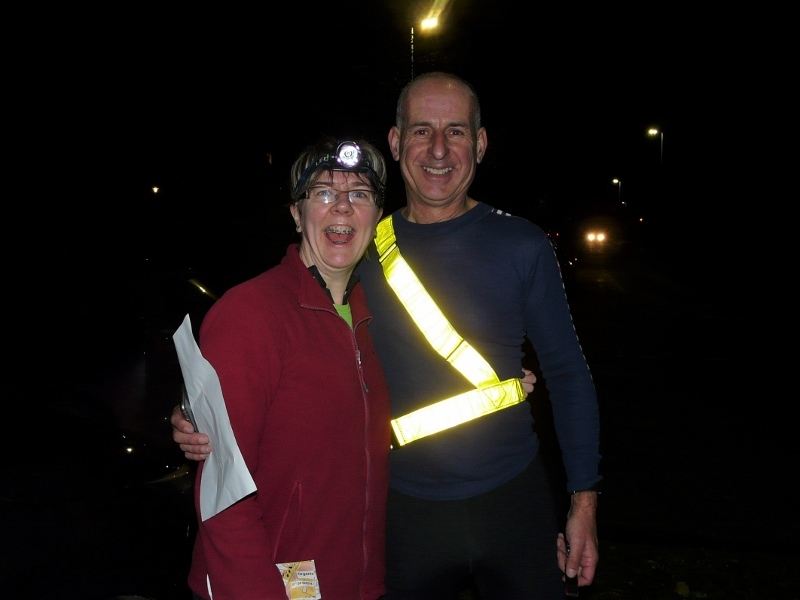 Andy, we only said you need to gets To grips With the Maprun format!

On the long course, there was a technical problem with Brian Pearson's run, with the app failing to register points he earned after switching colours. Brian's points have since been reinstated.

On the short course, Andy Rimes didn't appear on the results list because his phone battery expired partway through his run. Always recharge your phone and pause any battery-hungry apps before a MapRun!

Andy did though provide a GPS track confirming which controls he visited and the time he took. Graham Hartley ran post-event and almost matched winner Malcolm Hilton's time. Graham's time won't count towards the league, though. 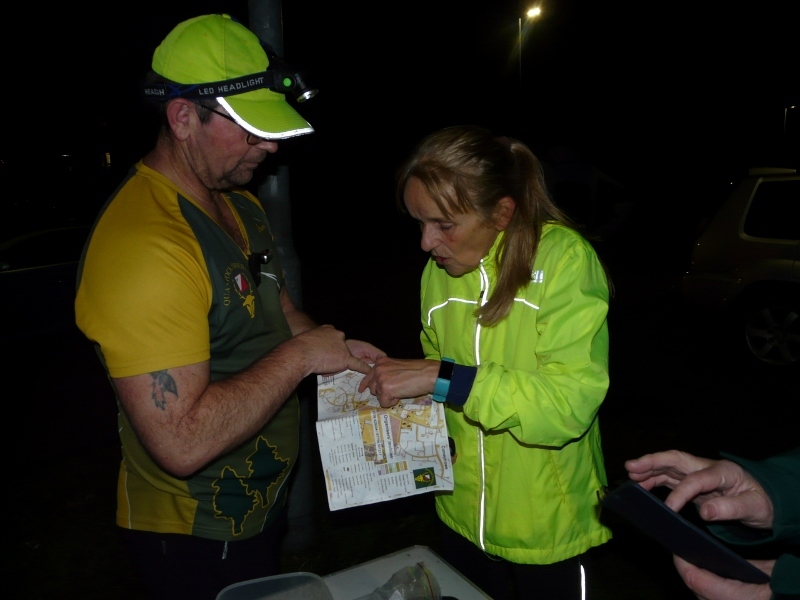 Thanks to Phil Sorrell and Sarah Pascall for testing the Long course. The app gave them scores of:

The points awarded by the app for each runner have been converted into a league score below after applying bonuses and age and gender based handicaps.

The rules, scoring method and the handicap basis chosen are explained here.

The full league points calculation can be found here. 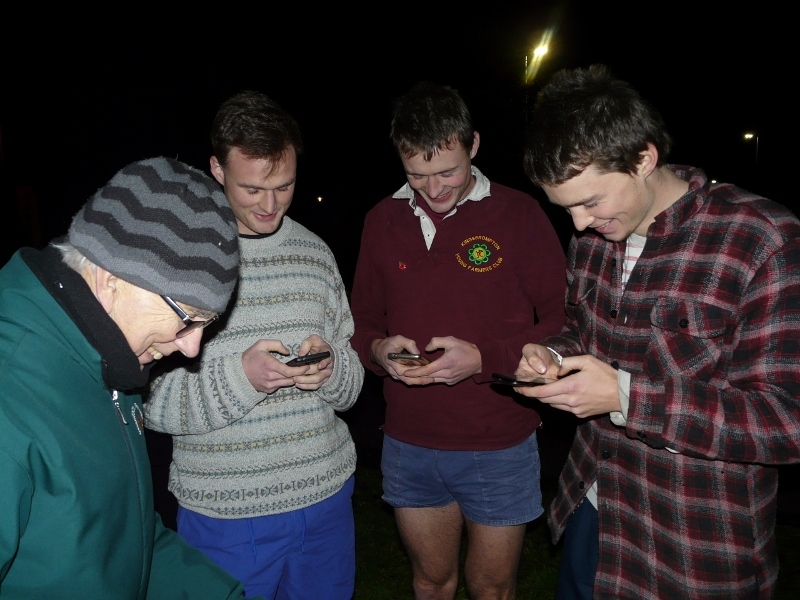 Sharing a joke - Roger and the Fieldhouses

At Comeytrowe, a score of 1000 has been calculated for the winner Adam Fieldhouse, which Adam will gain if he joins a recognised O club.

Chris Philip's impressive run at Wellington doesn't count for the league because it didn't register on the app.

Alasdair Shaw picks up a score equal to that earned from his Comeytrowe run for the Wellington event he planned previously. Similarly, Graham Hartley will gain his average score (923) for planning Cheddar. All event planners benefit from this arrangement. The score awarded for the 'missing event' will fluctuate with the runner's average scores as the series progresses

The ever determined Nath Fernandes - who else? - heads the Short course in this category.

Immediately after your run, you can upload your score and time to the web and compare how you did with others.

New to MapRun or need a refresher? Read our guide.

Parking: Free parking on the southern section of College Way, adjacent to the west perimeter fence of Queen's College. This parking is typically used by Musgrove hospital staff during daytime working hours, but it starts to clear after 5pm. Double yellow lines exist further to the north.

Assembly on the grass verge alongside the road. Look out for the club banner.

Directions: from the A38, take Galmington Road from a westward direction or Trull Road from the east. The event will not be signposted.

Both are "Score" courses, meaning there isn't a set order to the controls you visit.

Short Score- the order of the controls you want to visit is entirely up to you.

Long Score- there are two sets of controls, one set tackled after the other. Once you switch to the second set, you cannot go back to the first set.

Because of this scoring method, please double check that you've properly visited each control on the long course - it will turn green on your phone screen. Sometimes you'll get an audible bleep but the control won't turn green.

For this event, the optimum routes are about 9.25 km for the long and 6.5 km for the short. There will be 30 controls, giving a maximum score of 1000 points.

Each course has a time limit of 50 minutes.

Points will be deducted at a rate of 30 points per minute for each minute or part minute you're late back.

Points values for controls are variable and denoted by the first number of the control, e.g. 62 scores 60 points.

The control circles on the map are coloured red on one set and blue on the other- the colours are meaningful only for the Long score.

For those who took part in our QOADs series, the Long score uses essentially the same scoring system.

Link: more on the scoring systems

Please print off and fill in our standard registration form in advance (or email it to us) as we are trying to keep the event organisation low key.

Filling out a Registration form (link)

Ignore the boxes about 'SI' unless you are hiring a club phone, in which case fill in the details we usually request off those hiring SI dibbers.

£5 - for both adults and juniors with accompanying adult.

You effectively have a choice between running in partial daylight or in the dark.

The paper map is in OCAD at 1:5000, surveyed by Simon Beck in 2009. Little has changed except for the emergence of new out-of-bounds areas, shown on the map. It's not geo-referenced which means the on-screen map will be from open source mapping. This latter map has less features on than the paper map so it should not be relied on for navigating!

There is a brook in the park to the north which should only be crossed using the path marked on the map.

College Way bisects the area from north to south. Traffic can be heavy as workers leave the nearby hospital. Cross with care; you are encourage to use the two crossing points marked on the map.

Please join us afterwards. The beauty of the smartphone format is post race discussions are fully enabled by the instant results, leaderboards and race route graphics!

The gathering will be at the Vivary Arms, Wilton.

Directions: head north up College Way, turn right onto Galmington Road, right again at Trull Road (do not head back towards town- likely to be very busy). Then first left onto Haines Hill, bringing you to Middleway. Park along here or at the Fons George car park, which is free after 6pm.

We have seating for a dozen booked in the bar area for drinks. If you'd like to eat, they stop serving food in the restaurant at 8pm so if you'd like to dine, please let them know in advance or even phone in your order. The pub is about a mile from assembly and 500m off the NE of the map.

This venue replaces Yeovil NE, which has been rearranged to 4 March 2020 due to organisational restraints.