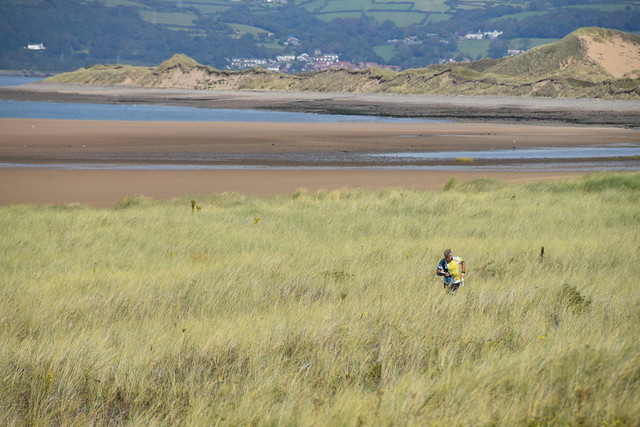 A lung-bursting long leg towards the end at Whiteford after a series of zig zags round the partially forested dunes & burrows to the rear
Credit: Barry Jones

Check out who's been giving themselves a sneaky headstart before the season gets going! Here is your round up of results and events for September to date, as some of the keenest get back to action after only the shortest of summer breaks.

Including as it did the Senior Home Internationals, this was a hugely impressive organisational feat from little Swansea Bay OC, albeit with some Bristol OK members sharing the planning / controlling burden. Although in such beautiful and intriguing areas, reccying the areas was surely a delight.

The action took place on highly technical terrain at Broughton Burrows and Whiteford Burrows (pronounced Bruffton and Witford respectively). At Broughton, Jeff Pakes ran a Black course (11.5km) for the first time since being an M21 and was 7th of the 12 non-international runners. The course circled the small but seemingly endless area twice.

Illustrated below is the extra long leg #16, with Jeff's route. Note the orangey-brown colour, depicting open land and a mass of contour detail, and the comparative lack of vegatation or line features. And then weep...the JK will be held in the South West at Easter 2021 on similar terrain!

Surprisingly given its proximity to Somerset, there was only one QO at the meet at south Bristol mansion house / estate on Sunday. That was newly crowned club champion Jim Mallinson. But not a day to remember for Jim as the results show he missed the first control.

Chris Denton mixed it with the fastest sprinters on these isles on campus at Loughborough University. His 13 minute race time put him runner-up out of 13 entrants in the Entry on the Day class.

Matthew Knipe returned to action at the Military League South (MLS) event in Dorset, running the Blue course won by Gavin Clegg. Held on Wednesdays throughout the season, it's quite rare to have an MLS event so close to Somerset.

Not a fearsome peak but a sedate country park, albeit one enjoying fine views over the Tamar estuary and Plymouth Sound. Steve Robertson was 4/17 on Blue, within four minutes of the winner and taking just an hour to get round.

Annabelle Lewis got the better of Oliver on the Orange course and won.

Pete Akers never needs an excuse to get down to the New Forest (his favourite area) and finished halfway up the field on Green at Southampton OC's event.

Several QO were at Devon OC's highly physical and varied forest near Exeter Racecourse. Phil Sorrell whizzed round the Green course in less than an hour, finishing 4/22. Oliver Lewis did likewise on Orange and was 2/8 and within two minutes of the winner. Annabelle was three minutes behind Oliver.

Martin Lewis continued on his roll of street events in the Surrey market town. The 8.5km course kept Martin occupied for a good 67 minutes.