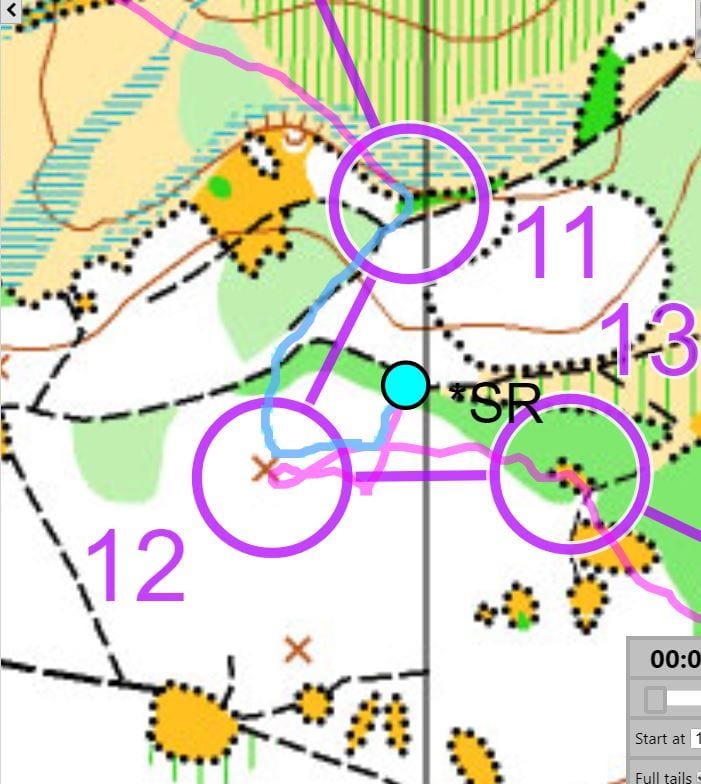 We've all been there - having a great run, then feelings of confusion and possibly utter panic when the next control doesn't fall to plan! A leg on Steve Robertson's Blue course from Sunday appears to illustrate relocation, from attack point through to finding the control.

Up until control 12, Steve Robertson was having a fairly clean run and was presumably getting acclimatised to what was almost entirely rough open terrain. Then the Blue course finally entered the woods.

Despite using a sharp path bend as a good attack point and sticking to a good compass bearing thereafter, Steve was unlucky enough to fall short of the control (a root stock) by metres. Presumably assured that he'd gone far enough south, he then tried heading east (suggesting he may have aimed off to the west), before cutting his losses and relocating off the path bend to the north (at the end of route marked in light blue, see diagram), another good attack point. 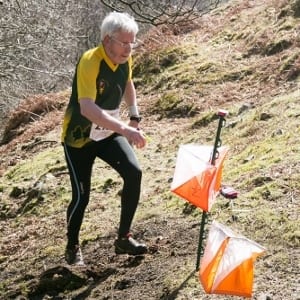 With Steve competing at the highest technical level (TD5), there were no catching features beyond the root stock (the base of a fallen tree). Though Steve's recorded GPS route shows he got within 10m of it, the root stock itself may have been hard to see at the angle. Distance judgement and possibly pace counting may well have played a part in Steve not heading any further south.

Looking at the splits for control 12, a few others albeit less than 10% of entrants had a problem with it, which appears to indicate it was fair.

The moral of the story is Steve lost three minutes but he made it a temporary blip. With others making mistakes on later legs or flagging, Steve's decisive action meant he recovered well and caught up those who had briefly overtaken him.