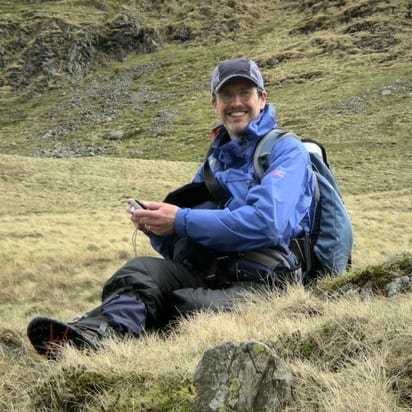 A QO newsletter he edited and a photograph of a winning QO relay team were amongst the memorabilia displayed at Tim Wood's wake on Tuesday (24th January). Tim's athleticism and his orienteering days were also referenced at the preceding funeral, at St Cuthberts Church, Wells, which Mike Crockett attended.

Tim had been a choir boy at the same church. The church was packed, which paid tribute to the esteem with which Tim was held in the city. Tributes were given by several members who spoke of his generosity, athleticism including orienteering, musical talents and abilities as a poet and his professionalism in the printing trade.

In later years did a lot of travelling and he was also very active in a walking group After the service a “wake” was held at the Football club in Wells where many photographs of his achievements were on show, including a QO newsletter edited by Tim and with a photo of the winning QO team at the Adams Avery race at Ashton Court. The team was Tim, Richard Raynsford and Mark Cann of Shepton Mallet.

Tim, although not a founder member of QO, was prominent in the early days when he excelled as first leg runner in relay races. I remember Dave Parkin telling me that Tim was always first out of the forest. Tim became managing director of the family printing firm St Andrews Press in Wells and when using manual map drawing and screen printing, all our maps were printed by St Andrews Press.

After a spell pursuing other activities, Tim joined his friend Richard Raynesford at Bristol Orienteering Klub but never attained the high standard of previous years.

Tim had suffered from an immune condition for many years and died on 7 January. Funeral arrangements have yet to be announced.

Mr Wood adored running and orienteering and in his younger days ran to a very good club level and completed two marathons in his later years, crossing the finishing line with his son Tom in 2000.

The funeral of Timothy John Wood will be held at St Cuthbert’s Church Wells on Tuesday 24 January at 13.45. Family flowers only but donations if desired for League of Friends of Taunton Hospital and World Vision may be forwarded to W.B.Gibbs & Sons, Riverside, Henton ,Wells BA5 1PD. Tel 01749 672450

Death of a former club secretary

The club are sad to learn of the death at 64 of Tim Wood, a prominent member and ace relay runner during our club's formative years. He became club secretary in the late 70s and also our map printer.