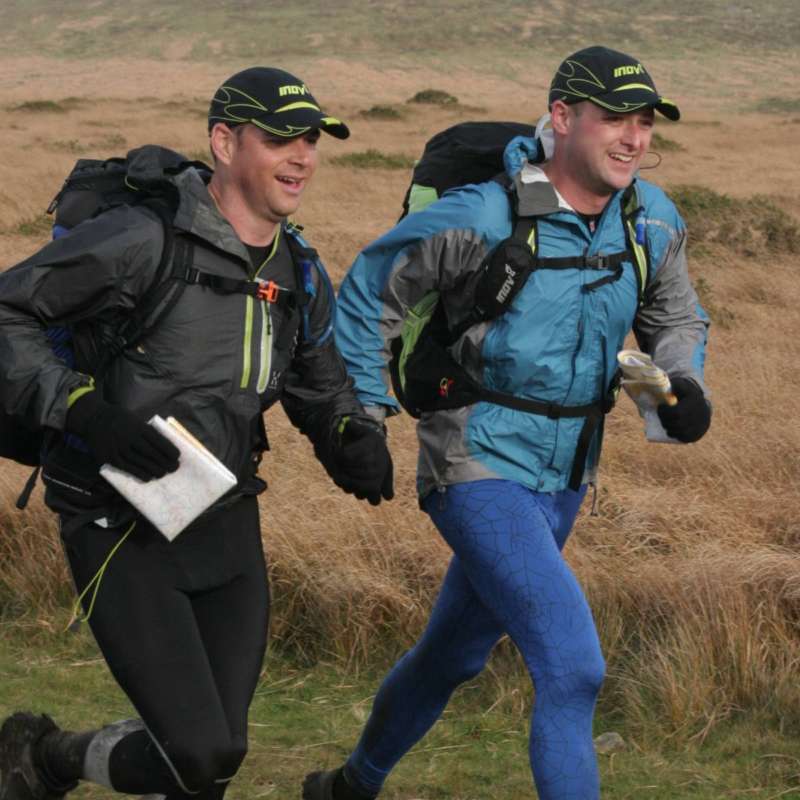 Richie (right) on a Long O with friend Adrian Edwards

Richie's work in the Royal Signals prevents him from attending many club events, so let‘s find out some more about this elusive creature...

Name: Richard (Richie) Hill (or the guy in the crazy tights)

Occupation: Communications Systems Engineer in the Royal Corps of Signals

How long have you been orienteering: since 2001

How did you get into the sport?: My first posting was to Northern Ireland in 1999 as a ―singley‖, and one of the Sergeants came banging round the accommodation block at a silly hour one Sunday morning looking for ‗volunteers‘. With hindsight, I was probably still drunk from 10 the previous night, when I found myself in minibus going to a NI military event, in some forest in the middle of NI. It was a map memory event, and half the area had been felled in the previous week, so we were doing knees-to-chest through all the discarded branches. With a hangover, dehydration and no compass, I found the start again after about 2 hours, having only found 3 or 4 controls. Surprisingly, I went again a fortnight later and actually completed a course!

Best orienteering moment...: Purposely getting myself disqualified (and the person following me!) by mis-punching at a Military League Event at Hermitage, Nr Newbury. Felt so good at the time, especially as he was supposed to be better than me, and I knew he was faster than me!

...and worst orienteering moment: Godshill, New Forest. I went to jump a small ditch and caught the lip of it with my toes, but the rest of my weight just crunched my ankle. It was 3 months before I could even go out for a jog.

Richie and his 'trademark' tights

What’s the one piece of advice you wish you’d been given when you first started orienteering?: KISS- Keep it simple, stupid!

Favourite O shoes: Inov-8 Mudclaws. I‘ve tried the lighter variants but they don‘t last, especially with some of my dubious route choices!

Thumb or baseplate?: Thumb, although I do tend to forget to take one sometimes.

Favourite O areas: Exmoor – only place I know where you can be knee high in water on the top of a hill! And the Lake District.

What are your other interests?: Gardening, Cooking, Foraging, Reading, Wine making and numerous other random things.

TV: pretty much anything on the Discovery Channel or Sfy Channel.

Who do you most admire?: James Cracknell – have a look a the TV program "The Toughest Race on Earth", for true inspiration on what the mind can make the body do.

Give us one fascinating fact about yourself that other club members might not know: This is difficult as the Adrian Edwards (the then QuOnicle editor) has known me since school! I once sung in the Royal Albert Hall (this was before my voice broke, as since it is only the children who have to suffer my singing in the car!) [Ed: I had no idea, and certainly wouldn‘t have guessed from his ‗singing‘ on this year‘s OMM]

And finally, describe yourself in three words: The Wife can do it in one – Muppet!

Taken from the QuOnicle, January 2012