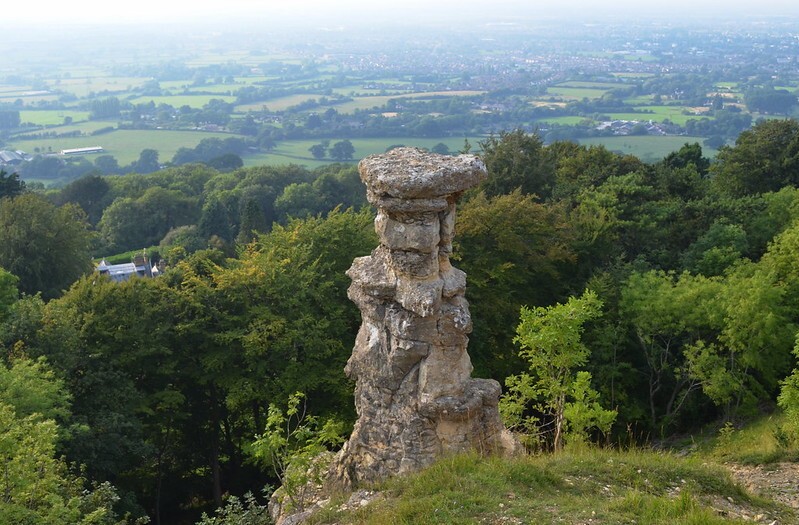 Two teams represented QO in the NGOC 2x2 relay on a sweltering Saturday on Leckhampton Hill, home of The Devil's Chimney, near Cheltenham.

What do you like doing on one of the hottest days of the year? Go to the beach perhaps, or sit in the shade with a big tub of ice cream. For some, however, the answer is 'run up and down very steep hills dodging gorse bushes'.

The top of Leckhampton Hill is fairly flat and has an ancient hill fort. However, the sides of the hill looking north, east and west form part of the Cotswold escarpment and are extremely steep. The area has been heavily quarried over the centuries, and this has left behind a wealth of contour detail in many parts. Much of the area is open grassland, but there are also some pleasant areas of woodland.

Two teams from QO arrived at The Cotswold Lion Brewery and made the walk up to the assembly to collect their bibs and first leg maps ready for the mass start - Qwerty Quantocks (Al and Jeff) and Quacks of Quantocks (Sebastian and Phil).

A 2x2 relay consists of two people running two legs each appropriate to their age allowing juniors and seniors to run in a team together.

Al and Sebastian took the first leg - both running Yellow. Within a few minutes, they both reappeared (Al then a few minutes later Sebastian) at assembly, before taking the wrong path out before eventually returning and heading off in the right direction.

It was a long wait for all the leg 2 runners - a combination of the heat, the trickier seasonal vegetation requiring more accurate fine orienteering and the very steep slopes, meant long leg times.

Al appeared after 41 minutes (the initial error compounded by pausing to watch some skydivers!) releasing Jeff to set off on his blue course. Sebastian had struggled with a few controls and decided to call it a day - as did quite a few other participants on various courses.

Jeff had a solid first leg in 56 minutes but was still mid-sandwich when Al returned after flying around her final leg in just 17 minutes. The sandwich seemed to help, and another solid run from Jeff put the Qwerty Quantocks in 6th place overall.

After the event, NGOC provided a buffet in the brewery before the QO teams headed home (but not before picking up a case of Drover's Return!)

Thank you to NGOC for organising the event and managing the complex logistics of the relay.