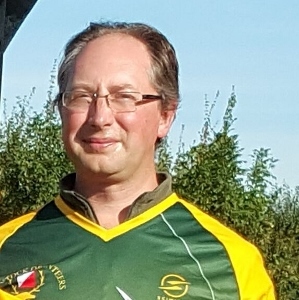 Many of you will by now know that the club has a new chairman in Alasdair Shaw. Orienteering is just one of many outdoor sports Alasdair has been involved in. Below he tells us a little bit more about himself.

I grew up in rural Lancashire and was always active outdoors. I skied for the North West until I was 14, retiring due to a knee injury. Shortly after, I started orienteering at school, running light green in a variety of events around the county.

When I went off to Cambridge, my main interests were climbing and mountaineering, a bit ironic given the flat fenland. I held several positions in the Rock Climbing and Trekking Society, including Secretary and President. I was also Captain of the badminton team for a year. During that time, my running tailed off; it turned out many years later that I had undiagnosed asthma.

Four years and some degrees later, I'd had enough of the fens. After stints teaching in North Wales and the Cotswolds, I settled in the Wellington area. Despite not running much, I took part in quite a few mountain navigation events and adventure races.

I am head of computer science at Wellington School and also teach physics and science. Alongside that, I have the wonderful title of MIS Manager, which involves responsibility for data management and interpretation. I run a lot of the outdoor activities, including climbing, caving, and orienteering. One thing I have pushed for is recognition of lifelong physical in addition to team sports, and we have this year been able to introduce two hours of orienteering into the Yr9 Wellbeing syllabus. I did lead DofE (https://www.dofe.org) for a while but now act as safety advisor. I also help train Ten Tors teams. A lot of my time is taken up organising and conducting activities for the CCF (https://combinedcadetforce.org.uk), ranging from live and blank firing exercises to overseas adventurous training. We even have a large orienteering competition each year with ten different Yellow courses and a handful of Orange courses.

In addition to being a qualified Mountain Leader, Rock Climbing Instructor and Cave Leader, I am a course director for the National Navigation Award Scheme (https://nnas.org.uk). This scheme is supported by British Orienteering (https://www.britishorienteering.org.uk) and Mountain Training UK (https://www.mountain-training.org) amongst others, and delivers training and assessment heavily influenced by orienteering coaching.

Wildlife is another passion of mine. I monitor moth, butterfly, dragonfly and bird populations for national organisations, the data going to inform environmental policy.

When I can't get outside, I write. I have written or consulted on a number of physics textbooks and revision guides, as well as archaeology and walking guides. But most of my published books nowadays are sci fi novels and short story anthologies.

Since getting my asthma diagnosis and treatment, I have rediscovered the joy of running. I do Parkrun whenever I can, and often marshal for Junior Parkrun at Longrun Meadows. I tend to run Green in orienteering events, and enjoy planning. Both my daughters have really taken to JOG, amazing themselves by coming 1st and 3rd in the 2018-19 season. One thing we always look for on holiday is a POC (https://www.britishorienteering.org.uk/pocs)!

Judy and I first became aware of Alasdair and his family through JOG and soon realised what a positive approach he had to orienteering both as a valuable activity both for his children and at his school. After the Planning Course arrangements he made for the use of Wellington School, I made some enquiries as to his commitments at the school and felt his leadership and outdoor activity skills made him someone who might consider taking the position of Chair, bringing a fresh, vital new approach to the Committee. When this was put to him, his response was immediately positive and after a period of consideration he agreed to stand. As no other Committee members were prepared to take the position, I proposed and Judy seconded him at the AGM and he was elected unopposed.