Midsummer on the Gower 2022 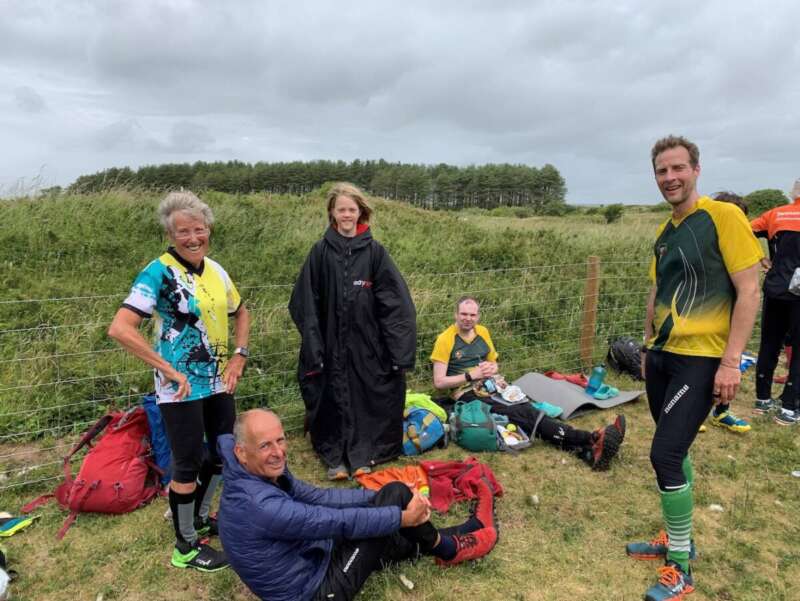 The forecast wind and rain showers did not put off a good turnout of QOs from making the journey to the Gower, South Wales, to enjoy technical terrain and a friendly welcome from Swansea Bay OC.

Most years, Swansea Bay OC put on a Summer orienteering festival usually (but not always) on the Gower, usually (but not always) in midsummer - it is an opportunity to sample some fiendishly technical dunes as well as socialise with fellow orienteers. This year, to celebrate their 50th anniversary there was a retro event on Llanmadoc Hill, a long-distance event on Broughton Burrows and a 2x2 relay on Whiteford Burrows.

Friday evening was a chance for orienteers to experience (or re-live) the experience of orienteering before dibbers, water-proof paper and printed courses on maps.

At registration, you needed to copy the control numbers and descriptions to a control card. Once your start time is recorded, you then needed to copy your course from a master map onto a (non-waterproof) map. Punching on the course was pin punching, and you had to make sure your name and time were recorded at the finish.

That does not sound too bad right?

Our recommendation of the always sunny event was somewhat dampened by the biblical rain we were unfortunate to coincide with at the start. The interest of a retro pin punching event dissolved into a chaotic disaster of soggy maps and cold, wet people. Nevertheless we all survived and will never complain again about minor niggles with SI, shiny/loud paper EVER again. [Rosie] 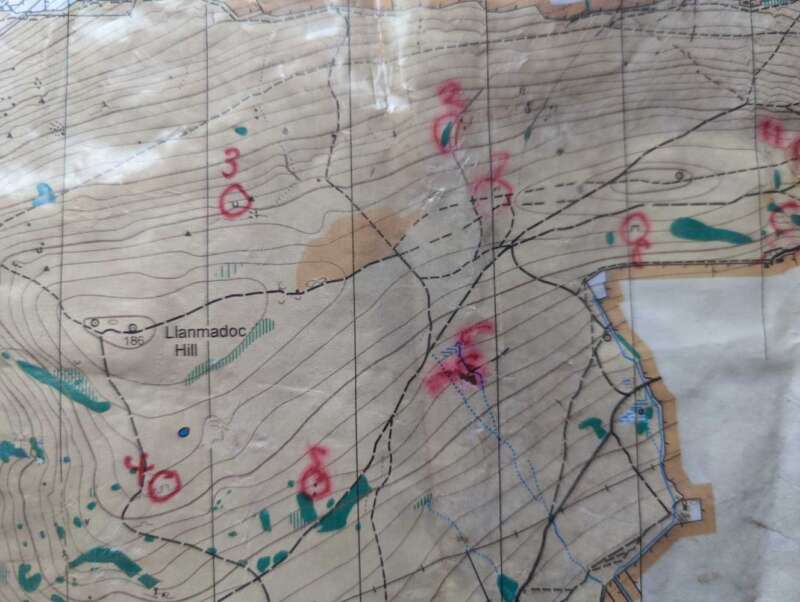 The remains of Phil's map of Green Course

Phil, a beacon in his bright orange rain jacket, managed to catch Jeff who missed control 3 after coming in at a difficult angle. The two ran in parallel for the rest of the Green course (choosing different micro-routes) with Phil finishing in 10th with Jeff behind in 18th. Andy, after a false start (his first map disintegrated in the rain within seconds without a plastic cover), was 5 minutes behind in 24th and Rosie was 29th.

Al, despite having the junior advantage of marking up her map in the car before starting struggled with water ingress and her map disintegrated after control 1. She continued until control 3 on Yellow before sensibly calling it a day and returning to the car.

The heavens again opened as the start of Saturday's long-distance event on Broughton Burrows approached, which kept the early starters in their cars. It soon improved with even some sunny spells which was fortunate in view of what turned out to be some very lengthy courses over challenging and complex dune terrain.

Karen, on Short Green, had a blast:

The area was technically difficult and you had to keep good contact with the map. I would say it favoured my type of orienteering. I was overtaken on several occasions only to lead people into the control. I followed the straight line method (I went up and down more dunes than I needed to) but it worked.

I thoroughly enjoyed the course, the terrain and the superb views from the tops of the dunes. I finished with cuts and bruises but still beaming. Loved every minute of it.

Phil, helped with more parallel running this time with Wessex OC's Jolyon Medlock, managed to just get an advantage on Jeff on Brown. They finished 22nd and 23rd both out on the terrain for over 2 hours.

On Blue, Shelia (21st) and Andy (25th) were likewise out for nearly two hours. Hamish made a good attempt on the challenging terrain before retiring after a fall.

On Orange, Oli and Annabel successfully navigate their course coming 1st and 2nd. Al, who has only recently moved up to Orange, took things steady and did so well but, despite 45 minutes of relocating and persevering, could not find the penultimate control.

For everyone staying on the event campsite, Saturday night was a chance for socialising. The juniors highlighted the amount of energy they had left by playing cricket, rounders, football and various games involving space hoppers. Meanwhile, the adults talked about all things orienteering whilst cooking dinner on various BBQs. A heavy rain shower ended the evening and sent everyone scurrying back to their tents. 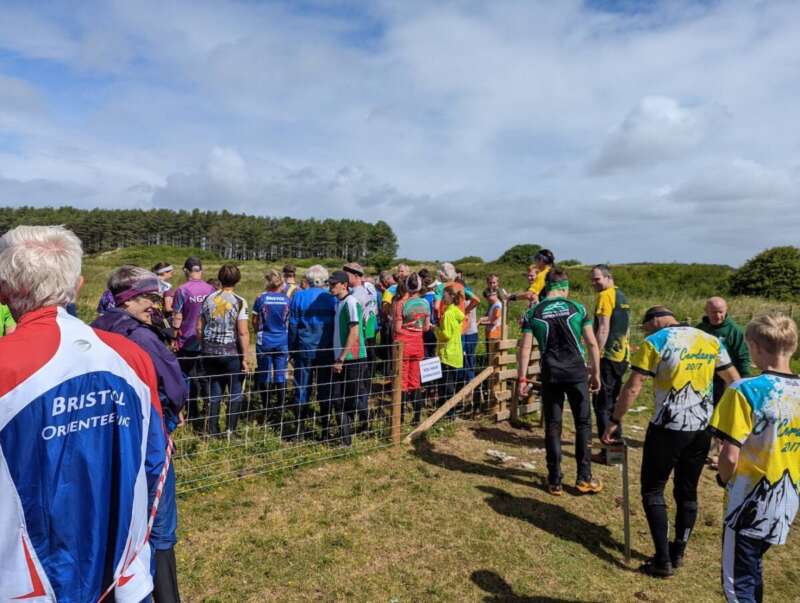 A 2x2 relay is where each team is made up of two runners each running two legs.

The final 2 by 2 relay met again with windy but dry weather. The area was a mix of dunes with wooded areas and a lovely setting. SBOC had cleverly calculated the handicap necessary to give all the teams courses appropriate for age and ability - so the first team back was the winner. The change over area gave a good view of the returning runners and the chance to socialise while anticipating the return of ones team mate. [Rosie]

A big massive thank you to SBOC for putting on a fantastic weekend of orienteering and for their friendly welcome. Both Al and I had a fantastic time and we are already looking forward to next year. And thanks for recommending the event Rosie, Andy and Jeff! [Phil] 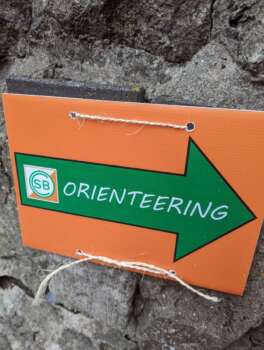 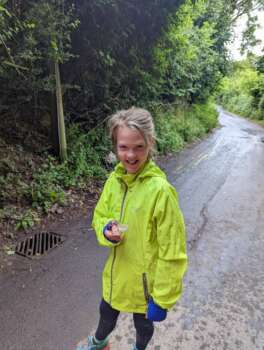 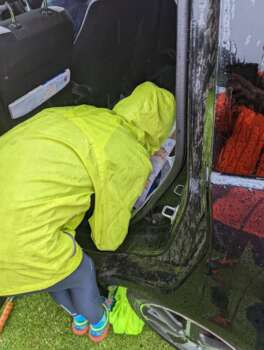 Al sheltering from the rain whilst copying controls from the master map
Credit: Phil Sorrell 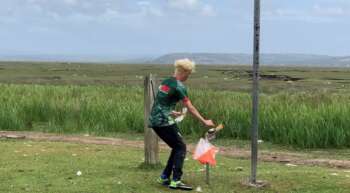 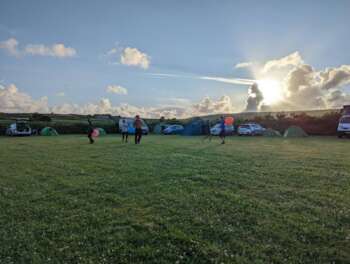 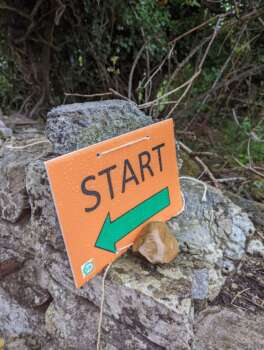